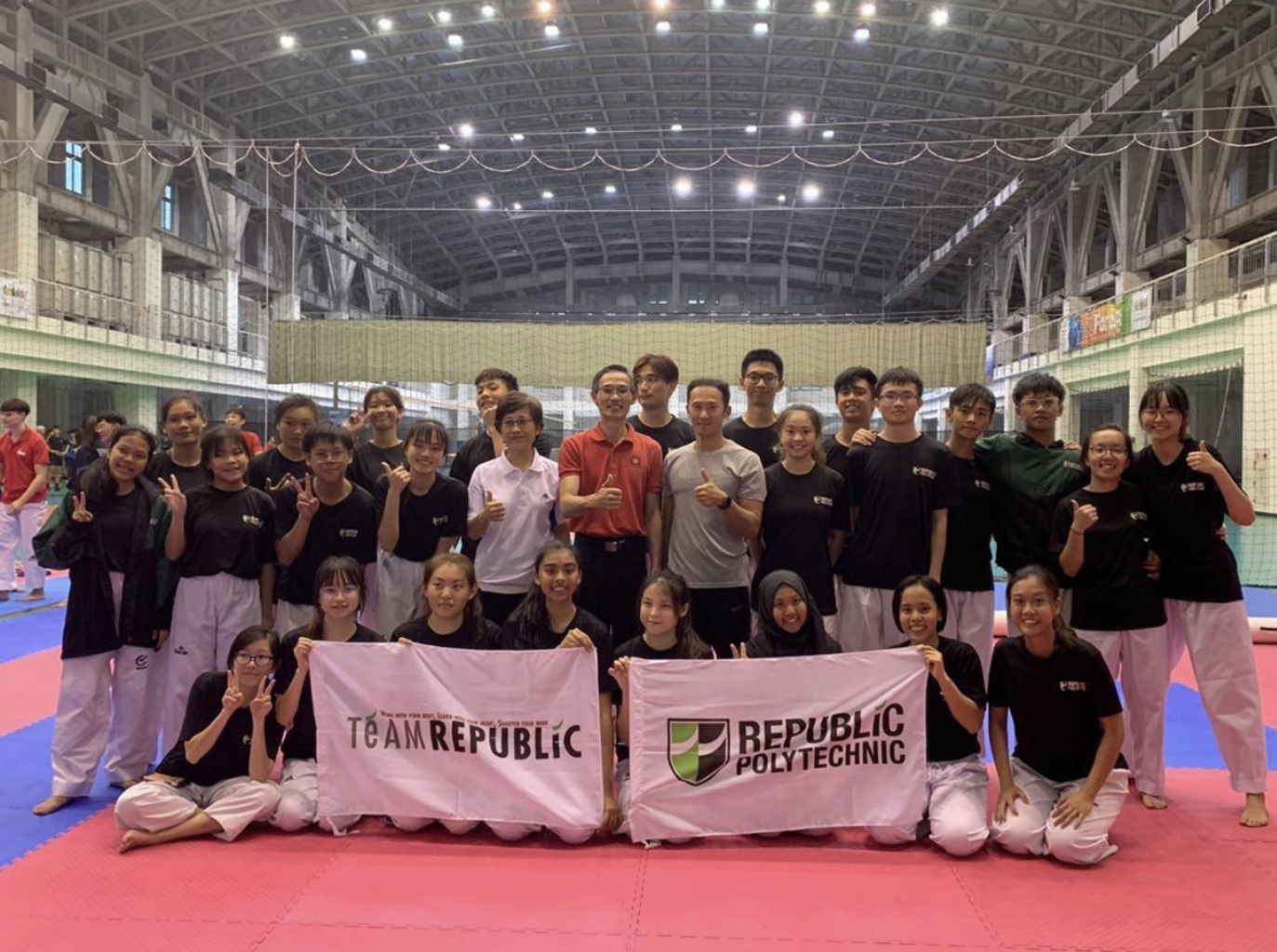 Twenty-five members of Republic Polytechnic’s (RP) Taekwondo team went on a recent trip to Taiwan from October 2 to 6 2019, with the objective of picking up techniques that would better themselves for future competitions and learn more about the Taiwanese culture.

The team visited the University of Taipei, where they practised a variety of taekwondo techniques and learnt new training methods like the “inward block”, “knife hand block” and “spinning back hook” at the University’s Sports Hall.

Koh Cheng Jie felt she benefited from the trip. The first-year student in Design and User Experience is now mastering Poomsae, a Taekwondo artform made up of defence and attack motions.

“I learnt more about Taekwondo techniques through this trip, as not only were my blocks and kicks more powerful, but I executed them more efficiently,” said the 16-year-old.

Apart from the fulfilling experience, Cheng Jie is determined to share the lessons learnt in Taiwan with other members who did not go for the trip.

“Going to Taiwan was really enriching for me as my knowledge about the art has expanded. After this trip, I want to do my best to help anyone and as a team we help each other along the way instead of leaving them behind,” she added. “We are a team and we learn and grow together.”

Muhammad Firdaus B Hussin, 19, was impressed by the hosts’ hospitality. “They were really friendly and willing to teach regardless of belt, and were even more understanding toward the juniors,” he said. “When we got the drills wrong, they were patient and would go through them slowly until we got the techniques right.”

The 19-year-old is still fresh to the sparring aspect of Taekwondo and explains that the training sessions with the Taiwanese helped build his confidence.

“Even though I’m a red belt holder and it may be considered senior in ranking, I’m still a newbie when it comes to sparring. In Taiwan, the students taught me lots of footwork and striking drills, like
transiting from a sidekick to a punch to a short turning kick,” Firdaus said. “It was really an eye-opening experience that has taught me a plethora of new skills.”

RP Taekwondo captain Aw Li Yun said the team took around seven months to plan the trip. She worked closely with the sport’s advisor, Mr Yap Peng Kee, and coach Leon Koh. “The process was bitter-sweet whereby a lot of work had to be put in but the sweetest part was when we got to enjoy and when I see the smiles from the team,” Li Yun said.