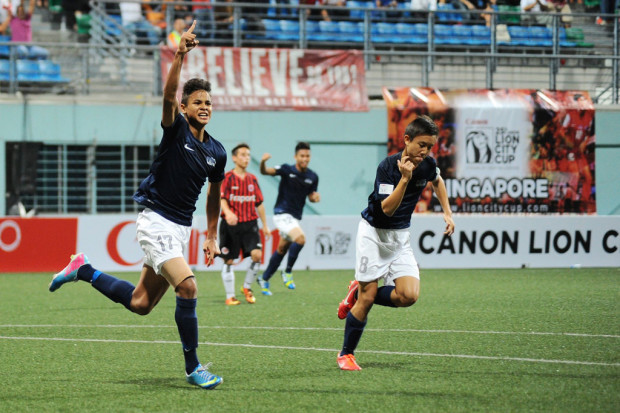 BIG BROTHER: Ikhsan Fandi will be looking to spearhead the NFA U16 side to success and follow in the footsteps of his older brother Irfan (left), seen here in the last edition of the Lion City Cup in 2013. (Photo: Lion City Cup Official Facebook Page)

The Lion City Cup, the world’s oldest youth football tournament, returns for its 26th edition this week after a year-long absence. Two top European teams – Tottenham Hotspur and Liverpool – will compete against Singapore’s National Football Academy (NFA) U15 and U16 teams.

The matches will be held over two days on August 14 and 16 at the Jalan Besar Stadium. The two English teams would be flying into the country on Wednesday afternoon and are set for competitive match-ups in their first game against the local youth sides on Friday evening.

The Lion City Cup was founded in 1977 as the only U16 football in the world and is organised jointly by the Football Association of Singapore and Red Card Global.

A player to look out for in the tournament would be NFA U16 striker Ikhsan Fandi – the second son of former Singapore captain Fandi Ahmad. Just like his father, the highly rated 16-year-old will be looking to make his mark on the tournament that has also unearthed talents like V. Sundramoorthy, Indra Sahdan and current national captain Shahril Ishak.

Besides the matches, a coaches seminar and a football clinic will also be held on August 15 and 16 respectively.

Tickets are on sale now with prices ranging from $5 for Gallery Concessions to $40 for Grandstand Season Passes. They can be purchased online at www.globaltickets.sg/lioncitycup or at the Jalan Besar Stadium.