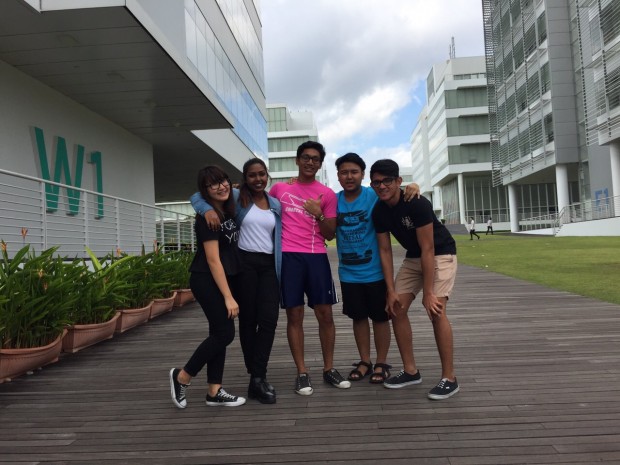 SAME OLD STRUGGLE: Before coming to RP, Yogaraj (C) faced the same problem like many around him: picking polytechnic or junior college. (Photo: Christine Yeo Khalid)

It is the season where O-level results are out and students choose the next step in their academic journey. For some, it can be an agonising decision between the “safe” route of going to a junior college or choosing the more “hands on” polytechnic education. Our writer talks about his experience.

Since coming to Republic Polytechnic (RP), many people have asked me this. Why RP? I get this especially from my friends and family, because I was a student of Victoria School (VS), a school where the majority of students head to JC and university.

When my results came out last year, I knew I could have done better. But I was glad the ordeal of the O levels was over and now it was time for me to choose my path. In my year, 96 per cent of the cohort was eligible to enter a JC and that included me.

I decided however that the academic route was not for me. I was quite interested to pursue a Diploma in Mass Communication (DMC). I have always wanted to be a journalist and I felt this was a step towards that goal. I applied to the media courses in all five polytechnics. RP offered me a spot and I accepted it straightaway.

If I had any illusions that poly life would be easy, they were quickly shattered on my first day. I sat through a Problem Based Learning (PBL) class and I was lost.

I had no idea why the students had to solve problems. Shouldn’t the teachers tell us the solutions? Everything seemed hard – from the Problem Definition Template to the study breaks which were spent preparing for presentations.

In VS, there were teachers and textbooks. RP though introduced me to lecturers and laptops. It was a whole new ball game now. I felt like I was tossed at sea and that I had to figure out how to learn, by myself.

My lecturers weren’t like my teachers in VS. Instead of monotonously going through worksheets and paper, they put more emphasis on engaging us students on a deeper level. But they expected more out of me. Before I knew it, a week flew by, then a month. Before long I sat for UT3 and I was done with semester 1. It was incredible that my classmates and I survived!

Having gone through the first semester, the answer to the question of why RP became clearer to me. I was tired of flipping workbooks and sitting through mass lectures. I wanted something different and I found it here. I know it is not going to be easy – that even presenting every day can get tedious and my stress levels will increase as I go into Year 2 with more projects and greater demands on my time.