4 Acts You Should Not Miss: Neon Lights Festival 2015 Preview

Aside from headline acts like folk-rock darling Damien Rice and electronic music duo Flight Facilities, a variety of acts who you would not normally find performing in Singapore will be playing at Neon Lights Festival 2015.  Here are four acts you should not miss at the festival.

The lyrically abstract and instrumentally dense Julia Holter will be performing on the second day of the festival. Her music might be difficult to classify, but for a try it is a mixture of classical and experimental music, imbued with theatrical elements.

Feel You, Silhouette, Night Song, Hello Stranger, Sea Calls Me Home, Have You In My Wilderness

The Pains of Being Pure at Heart

The Pains of Being Pure at Heart (TPOBPAH) is an indie pop quintet hailing from New York City who produces punchy and concise indie pop tunes. Bursting onto the scene with a critically acclaimed self-titled debut, the group brought shoegaze elements and thin breathy vocals to sonically potent melodies and memorable hooks.

Simple and Sure, Everything With You, Young Adult Friction, Come Saturday, Masokissed, Even in Dreams, Belong, Stay Alive

Sun Kil Moon is a folk rock act fronted by Mark Kozelek, who has gained credibility for being the former frontman of Red House Painters as well as for having a steady output of solo singer-songwriter records.

The band grabbed headlines with a highly confessional and heartfelt album, Benji, in 2014. Packed with the warm sound of classical guitars and “a vocal delivery comparable to spoken word”, Sun Kil Moon’s tracks are like diary entries to envision and to explore.

Shugo Tokumaru is a Japanese singer-songwriter and multi-instrumentalist who paints adventurous sonic portraits. His resolve to innovate as well as experiment with a variety of instruments such as wind-up toys and kazoos has left him with a discography of colourful albums.

In addition to the four artists mentioned above, Neon Lights has an extensive line-up spanning a variety of genres. From Rock and Roll Hall of Fame inductees CHIC ft Nile Rodgers to up and coming Irish singer songwriter SOAK, the musical palette at the festival is genre diverse and wide.

Not forgetting homegrown acts, the local line up at the festival includes post rock band Paint The Sky Red, indie pop band Lost Weekend (with their electrifying single “Mornings”), as well as several other local artists such as Bennett Bay and Hanging Up The Moon.

Aside from music, Neon Lights also promises to be a proponent for others who might be more interested in visual or literary arts, with live graffiti and performance poetry. Check out the full schedule here: 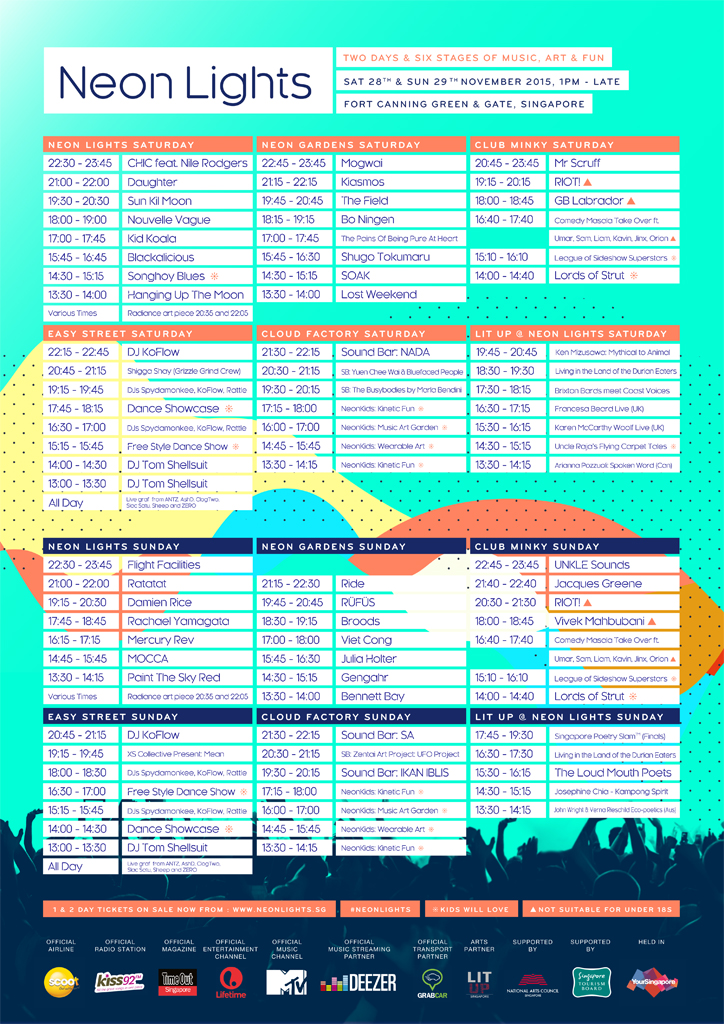