WWE 2K16 Review: The Game Fans Deserved A Year Ago 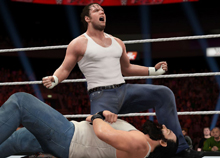 With WWE 2K15 being a huge let-down last year, 2K Sports aimed to deliver a game that would have WWE fans chanting “Yes! Yes! Yes!” this time around. Did WWE 2K16 manage to climb the ladder to greatness or did it fall flat on its back for the three-count?

Right off the bat, I noticed that 2K16 had enhanced their graphics, making it much more stunning and realistic.

Game developers, Yuke’s and Visual Concepts, have done a great job on the presentation of WWE 2K16, as the environment such as the arenas and ring looks amazing.

Character models have also been enhanced down to even the slightest detail like the volume of the hair, cloth of the costumes and sweat of the superstars all thanks to the motion capture technology the game developers used on the athletes.

With 120 playable characters, WWE 2K16 is packed with the largest roster ever. But, not everyone in the roster was scanned. Some of them looked quite different from real life while some other models were even reused from WWE 2K15.

The commentary in WWE 2K16 features a three-men commentary team for the first time ever. As you and your opponent battle it out, Michael Cole, Jerry Lawler and John “Bradshaw” Layfield will be commenting in almost every move made in the match, an insight on the athlete and even the story between the opponents if there is any. The game feels new with some lines never heard before from previous WWE games.

However, the commentary sometimes sounds dull with little enthusiasm making matches feel less exciting than they are supposed to be – an improvement that Yuke and Visual Concepts should look into.

Superstar entrances are not as accurate as they should be. Fan favourites like The Rock and The Undertaker come out to little fanfare in-game, when in reality they make audiences go wild the moment their music hits.

Animations for some wrestlers are not captured properly as well when they walk out. Brock Lesnar’s signature style is slightly off the mark as he makes his way to the ring – most obviously seen in the beast incarnate’s trademark hops.

In WWE 2K15, we saw the return of the stamina system and the new chain wrestling system. In WWE 2K16, 2K introduced a new reversal system where you are allowed to press the reversal button whenever the opponent attacks. But there’s a limit to the number of times you can do that.

Once you have used all them, you have no choice but to wait until your reversal meter refills again causing you to take a beating until then. I like this a lot, as this prompts the player to fight smart instead of just mashing buttons and having a match with endless reversals.

The submission system has also been changed into a more player driven experience as compared to WWE 2K15’s Breaking Point submission system. Players are now required to “chase” the defending opponent’s colour in the meter and hold there to get him to tap out. Although it feels like a thumb war, it feels more realistic and fun.

There is also a new Break-Out system in which players can choose to attack their opponents during their entrances giving the players more ways to start a match. The reason for the inclusion of this feature is that for the first time ever, there are no load times between entrances and matches allowing the Break-Out feature to work perfectly.

This also lends reality to the game, as the wrestlers tend to interfere with their opponent’s entrances in the ‘live’ shows.

In 2K15, your goal was to be in the main event of WrestleMania. In 2K16, you have a bigger goal – to be inducted into the WWE Hall of Fame.

You also have more choices to make in 2K16. Dislike someone backstage?  Treat him hostile and watch him be your next rival. Want to team up with someone? Make him your ally and he might just help you out.

Another cool feature in My Career is Career Invasion. Turning on this feature will inject your friend’s own created superstar into your career. You will not know how or when they will appear in your career, which adds to the suspense. When you finally run into them at some point, it feels like more than just a cameo but it’s as if your career and his are intertwined and connected.

In the 2K Showcase Mode for WWE 2K16, you get to play as one of WWE’s greatest superstars, Stone Cold Steve Austin. The whole game mode revolves around The Rattlesnake as you get to relive Austin’s career.

If you are a Stone Cold fan like me, be prepared for countless waves of nostalgia to hit you. From his humble beginnings at WCW to the “Attitude Era” in the WWE and finally to his last legendary match against The Rock at WrestleMania XIX, playing his career and reliving his most iconic moments in sports entertainment will give you nothing less than goosebumps.

With the newly added features and improvements in WWE 2K16, it is certainly the best wrestling game produced by 2K ever since they took charge of the franchise in 2013.  Bottom line is that WWE 2K16 is the game that WWE 2K15 should have been. Nonetheless, there is still room for improvements, which we hope to see in WWE 2K17.

This game was reviewed on PS4 but is also available on the PS3, Xbox One, and Xbox 360 platforms.