A Fencing IG? One student is doing all he can to make it happen 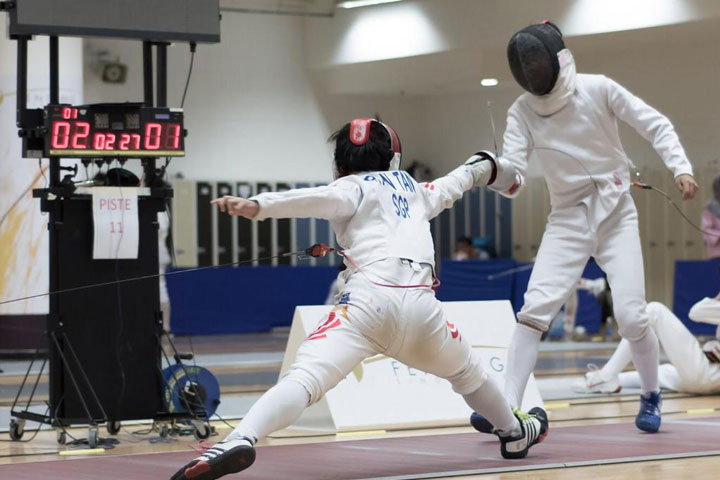 RP’s student fencer Ryan Tan, a founding member of the new Fencing IG, re-kindled his passion for the sport through his team. (Photo: Ryan Tan)

Student fencers share their journey towards starting a new Fencing IG in RP, as well as what they hope to achieve.

RP’s student fencer Ryan Tan, a founding member of the new Fencing IG, re-kindled his passion for the sport through his team. (Photo: Ryan Tan)

Zhao Junyu has a passion for fencing. Seeing that there was no Fencing Interest Group (IG) in Republic Polytechnic, the 19-year-old joined the Archery IG and worked his way up to being the captain. He was also involved in Team Republic Sports Club (TRSC), becoming a vice president. However, being part of a fencing team in RP was something he continued to wish for.

“It’s a bit funny, but I thought that Archery and Fencing were my two picks for sports I would do, because they seemed cool,” the second-year Biomedical Science student said. As he watched more videos on YouTube and picked up the nuances in fencing and its three disciplines, Foil, Epee, and Sabre, he began to seriously consider breaking ground for the introduction of a new Fencing IG in RP.

“Of course, I knew that starting an IG from scratch was going to be tough, and that not many are willing to do so,” Junyu said, knowing that his experience will come in handy.

“I realised that with my experience in TRSC, handling the Office of Student and Graduate Affairs (OSG) matters, I already had a clearer idea of what OSG requires, and I had contacts and connections.”

Junyu then reached out to a few advisors and some friends met Ryan, 18, a second-year Sports Science student who was prepared to start this journey with him. Ryan was a former national team fencer, and had quit the sport after the Covid-19 pandemic affected his plans to compete internationally. He took up touch rugby, not wanting to give up sport completely.

“I thought that fencing was something that I had left in the past,” said Ryan. “But Junyu showed me that he had so much passion. He really wanted to see things through, and this motivated me.”

Junyu noted that proposals that needed to be drafted for OSG were huge administrative tasks that required lots of effort. “We had to juggle these with our own studies, and I was also handling Archery things at the same time, so it was quite challenging,” Junyu said.

Another challenge to be tackled was finding members who were interested in joining the IG. From comparing notes with another interest group, Muay Thai, which was also new, the pair was already aware that membership and recruiting was going to be tough – 20 to 25 members were required as part of the OSG requirements to start an IG.

At first, the pair relied on word of mouth to find people interested in joining as they could not use school platforms to spread the word due to fencing’s unofficial status.

Luck would have it that they found more fencers in the student population who were interested in joining not just as members of the team, but as part of the new core team. Most of them were connected through their friends, but many joined after seeing the Fencing IG’s Instagram page.

One of the student fencers who joined the core team was Velouria Soh, 18, a first-year Common Science Programme student. She learned of the initiative from her external fencing coach, who had seen the page on Instagram. “I was super sad when I entered RP, because I wanted to be a part of a school team. So my coach knew how sad I was, and he was very excited to share this with me when he saw it,” she said.

Other team members noted that the group’s unofficial status would be a challenge in the future in terms of getting a budget. This would prove to be a challenge when it comes to booking venues and buying equipment.

Despite these challenges, the team remains optimistic and is working hard over the holidays to see their efforts through. They found a silver lining in the willingness of local fencing clubs to work with them at no cost..

“Because we have quite a few fencers in the school, who all reached out to their clubs for help, we have gotten hold of coaches quite easily. They are quite willing to work with us for no cost because it’s also a good investment for them,’’ Junyu explained. With one obstacle down, the team has worked on a proposal for submission to be given official status.

Junyu and Ryan felt proud of what they’ve accomplished so far. The latter attributed his newfound motivation to the team who he said has displayed passion through many late nights of planning. The team recently began reaching out to more students and now have more than 30 participants interested in tryouts.

When asked about his goals for RP Fencing, Junyu said that he wants Fencing to be the fastest IG to gain official status and be sustainable to see his efforts continue into the future.

Ryan hopes that RP will gain prominence in the local scene for being competitive in all 3 weapon categories. While they may seem like ambitious goals, the accomplishments thus far show that the team is on the right track.