An Illuminating Performance: The Silly Little Girl and the Funny Old Tree 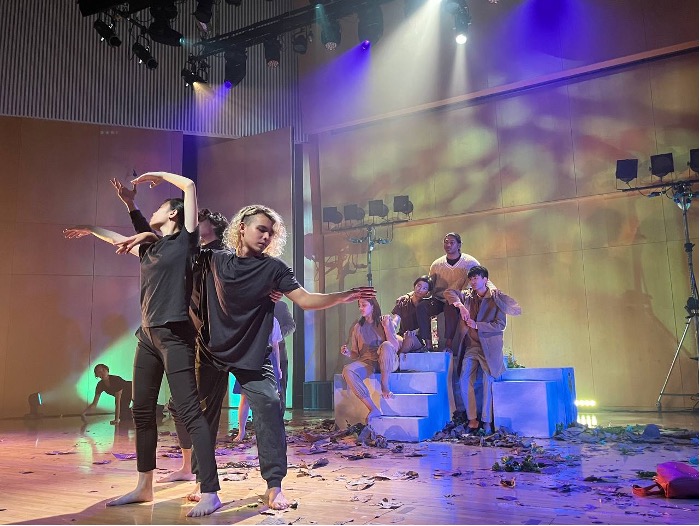 The cast of The Silly Little Girl and The Funny Old Tree during a flashback scene. (PHOTO: Hema Ramesh)

As part of the Reflections Art Festival held by Republic Polytechnic (RP), our very own Operation Theatre, performed a play titled “The Silly Little Girl and the Funny Old Tree”.

The cast of The Silly Little Girl and The Funny Old Tree during a flashback scene. (PHOTO: Hema Ramesh)

The Silly Little Girl and the Funny Old Tree was a play originally written by Kuo Pao Kun, one of the pioneers of contemporary theatre in Singapore. The play explores a friendship between a little girl and an old, odd-looking tree. However, when developers threaten to destroy their friendship with a bulldozer, the little girl’s world turns to calamity.

Through a seemingly odd friendship between a Little Girl and an Old Tree, the storyline aims to highlight the theme of “loss” in our society.  Although this play was written in 1987, this storyline is still very much relevant to today’s context.

Directed by Miss Gloria Tan, a theatre practitioner who coaches students in Operation Theatre, the play brought about a whirlwind of emotions. Despite the many jarring emotions, both Miss Tan and the actors managed to encapsulate the essence of the storyline and did due justice to it.

Walking into the theatre at TRCC, there was something unusual. As the audience streamed in, the six actors who played “The Funny Old Tree” were already onstage and in character.

Clad in brown, the actors attempted to give the audience some context as to what the Old Tree was like. Some of the actors feigned a deep sleep, while others mimicked the audience’s movement.

Amused, the audience entertained them with silly little actions like “peace signs” and heart shapes. Soon after, the lights dimmed, the whispers in the studio hushed, and the play began.

During the duration of the play, the audience was nothing but awe-struck. From the well-timed jokes to the warm hugs of embrace, the raw emotion on stage was what captivated everyone’s attention.

Throughout the play, sighs, snickers and sniffles were heard. The climax, however, was undoubtedly what kept the audience on their toes. The Little Girl was faced with the hard-hitting truth: society did not care about the tree. Just as she was faced with reality, red lights flooded the studio and suddenly, the Little Girl found herself fighting against bulldozers, thrashing and banging her way through to protect the tree. However, her efforts were futile – the tree was not saved, and its branches were cut off.

The rush of emotions was overwhelming, to say the least. The struggle the Little Girl went through to save the Old Tree was painful to watch, but it was what spoke to the audience the most.

Clutching pieces of tissue paper, the teary-eyed audience erupted into a roar of applause at the end of the performance. It was clear that the cast was proud of themselves, with smiles plastered on their faces as they took their final bow.

The one thing that stood out most was the twinges of emotions the actors displayed. The lead actress, How Jing Yi, a Year 1 student from the Diploma in Mass Communication, was a prime example. During each and every scene, she captured the essence of an innocent little girl. Her facial expressions, body language and delivery of lines were done excellently. They were what made her character so loveable, and easy to sympathise with.

Not forgetting the six actors playing “The Funny Old Tree”, the joint effort to produce a strange and funny-looking character was a commendable one. Each actor took on various monologues, and their unity shone through as all of them came together to produce a strong and multi-dimensional character.

Upon watching the play, one thing was obvious: the chemistry between the cast and Miss Tan was unmistakable.

“I am immensely proud of the students. Their tenacity and their bravery is something that is very inspiring to me. They are the gift that keeps giving and I hope they will go on to inspire others as well because they have never given up on themselves.” says Miss Tan.

At the end of the day, the extensive effort put in by the cast and Miss Tan came through, and the play was nothing short of a success.

The Silly Little Girl and the Funny Old Tree was staged on 28 October 2022 as part of Reflections Arts Festival.