Bishan-Ang Mo Kio Park: A closer look at a blueprint for a green future 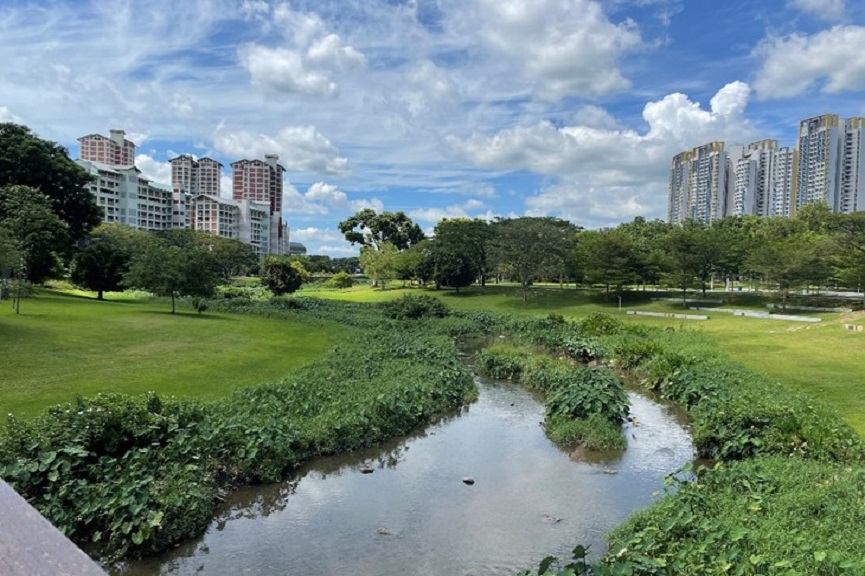 Bishan-Ang Mo Kio Park can be considered an epitome of a modern urban park. With well-thought architecture, inclusive facilities and amenities as well as rich biodiversity, this park sets the bar for future nature park redevelopment projects.

It was just a few minutes into the bus ride from the Ang Mo Kio Bus Interchange before I spotted two huge grey buildings with a mall-like aesthetic to them. The pillars supporting the structures resembled an inverted tripod.

The football field on the rooftop and plants hanging over the sides of the corridors were very distinct architectural features. It reminded me of a scene from a comic about a future where nature is incorporated into man-made structures.

It was the first-ever high-rise Junior College named Eunoia. The twin 12-storey building overlooks my destination across the road, the Bishan-Ang Mo Kio Park.

The park is one of the flagship projects of the Active, Beautiful, Clean Waters (ABC Waters) Programme which was launched in 2006 and aims to extend the functions of Singapore’s water bodies from just drainage and channelling water to become rivers and lakes that are beautiful and clean with spaces for community bonding and recreation. But has the modern urban park met its objectives?

As I strolled along the flat riverbed on the tar running tracks, a crisp chirp of a bird drowns out the mating noise of the cicadas. My head was on a swivel, looking for the sound of the fowl. There it was, a Black-naped Oriole,  perched on a branch. Despite being a bright yellow bird amongst the green foliage, the different shades of green and the sun rays concealed the bird well.

Just 50 metres into the trail and I had already encountered a beautiful specimen of an animal. I was eager to see what other wildlife this park would offer. I looked up and saw a rock pavement leading from the elevated running tracks I was from, all the way down to the thick vegetation surrounding the riverbed.

The rock pavements lead into the water. The steps were elevated which allowed water to flow without being disrupted by the pavement.

Silhouettes could be seen in the water. They were fishes. Some were flat and shiny while some were thick and dull. Schools of fishes were spread out as far as my eyes could see.

The healthy population of fishes might be the reason why stingrays and even otters can be seen in these waters. The decision to deconcretise the “longkang” or canal and naturalise it, has brought back a stable ecosystem. It was a refreshing sight from all the high-rise buildings surrounding the park.

A PARK FOR EVERYONE

Right off the bat, I could tell that this park had a higher than usual number of benches. Some were those typical benches you can see at the void deck, and some were like benches at the beach, except in this case, they were made from dark planks of wood.

With Ang Mo Kio housing the third largest elderly population in Singapore, it is no surprise that the park was designed with them in mind.

The grey and old were the majority of users in the park. I saw a cute elderly couple in matching pink coloured tees, having a breather on a bench after their jog while enjoying the view.

What struck me most when I was there was the 900 square metre Therapeutic Garden. The garden is designed to facilitate people-plant interactions. Think of the garden as a tool to engage a person’s mind by stimulating the senses such as sight, smell and even touch and taste.

It was a collaboration between the National University of Singapore (NUS) Mind-Science Centre, using an evidence-based approach from research in environmental psychology into the design.

The Therapeutic Garden had a sense of tranquillity. Only the sounds of birds chirping, chickens rustling in the bushes and the sound of cicadas filled the air. The open space around the garden allowed the breeze to dry my perspiration.

I immersed myself into the flora. My breathing slowed. I was calm.

A lanky and stalky but familiar plant stood before me. I tore a piece of the leaf and smelled the oils it released. I rubbed the oils on my arms to deter critters.

It was nature’s insect repellent that smelled like a citrus fruit. Most people know it as Lemongrass. I knew about this from my Basic Jungle Survival Course by the Army during my time in the National Cadet Corps.

After wandering and stimulating my senses in the garden, I head out to the playground to have some fun. As I got on the swing cautiously with my bulky backpack, a big yellow swing with seat belts like the ones in a vehicle, caught my attention.

But it wasn’t designed for me. It was for the immobile, the wheelchair-bound. What an addition to the park’s everlasting list of inclusive design features.

The Bishan-Ang Mo Kio Park is proof that proper urban development planning can still leave some room for nature and man, even those of differing capabilities, to co-exist. This park is a great blueprint for the City in Nature initiative by NParks, that aims to build upon the green spaces that Singapore has already developed over the years and also to further restore nature into the urban environment.

It has been about 10 years since the costly revamp and the return on the investment is evident though not tangible. The smiles of park-goers enjoying the thriving flora and fauna are the intangible returns. The close proximity between nature and humans in the park is one step closer to changing human’s relationship with nature.

As the sky dims, I stroll my way out of the park and back to the bus stop. The high-rise, 2 block building with shrubs, served as a reminder that for humans to continue to thrive on earth, we have to embrace nature as a part of our lives.