BTS Exceeds Expectations at ‘Love Yourself’ Concert in Singapore 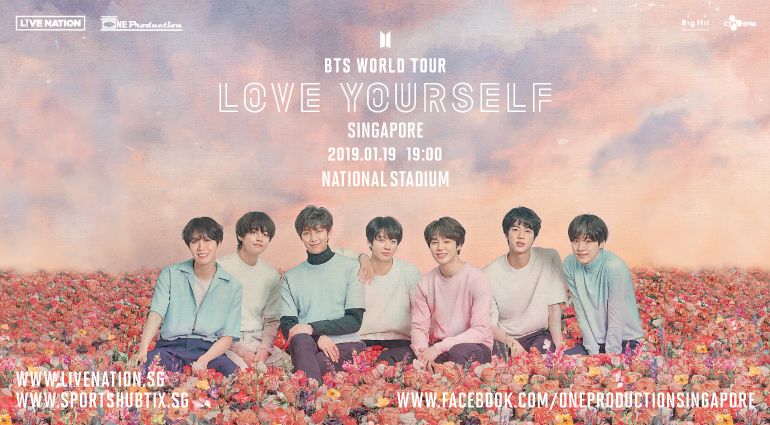 Sold out within three hours, K-pop boy band, BTS exceeded expectations for the 55,000 concertgoers with their synchronised choreography, smooth vocals, and mesmerizing costumes during their concert at National Stadium, Singapore recently.

Since the worldwide release of South Korean boyband, BTS’ latest album Love Yourself, the seven-member group (RM, Jin, Suga, J-Hope, Jimin, V and Jungkook) has been labelled by Western media as ‘the biggest boyband in the world’. Getting tickets for the sold-out concert which was held on January 19, 2019 at the National Stadium was competitive and it was worth the fight to the finish.

Hundreds of fans with non-seating tickets were already showing up at the gates as early as noon, even though the show was to start at  7 p.m. The crowd of a mix of teenagers and adults (I spied some mothers with daughters) were chatting away, waiting for the boys to arrive.

Then the lights dimmed and the stadium suddenly roared with deafening screams as seven silhouettes appeared on stage.

Immediately, a chant was heard as the crowd shouted the band’s name and members’ names in unison. At first glance of the boy band, it was clear that a lot of thought was put into their choice of costume, each segment of the concert required a change in costumes for every member and it was no different from a fashion runway. Their costumes can be described in three words – shiny, glittery, sparkly.

Each member wore thick foundation, pink or brown eyeshadow with a thin stroke of black eyeliner that did not cease even under the strong harsh spotlights and sweat. Even on the wide screen, the red lip tint the boys wore was visible throughout the night.

There were seven solo acts – one for each member. It was clear that each BTS member has a niche skill in either rapping or singing, not both. RM, Suga and J-Hope showed their rapping skill but J-Hope outshone them with his breakdance which further proved that he deserved the title of being the Main Dancer of the group.

It was not only the performers who were busy, but the fans also had a task as well. A slogan banner was given out to all concertgoers at the entrance which was to be held up during a specific segment of the concert.

Fans were required to connect their light stick to an app on their smartphone device using Bluetooth. The app required the user’s seat number which enabled the colour of the light stick to be controlled. But the price of the light bomb was enough for me to widen my eyes as it was sold for between $30 and $60, inclusive of shipping fees.

The highlight of this was the spread of rainbow-coloured dots which added a surreal visual scene for not only the performers but the audience as well.

The band managed to squeeze as many songs, especially popular singles such as Dope, Fire, Baepsae and Save Me into the show. This was followed by full-length dynamic performances such as DNA and Fake Love, in which main dancer, Jimin, slipped on spilled water and fell hard on his bottom while an emphatic roar of “Oohs” could be heard throughout the entire venue. The singer recovered quickly while the other six members were giggling.

The highlight of the performance was the perfectly synchronized dance movements that sent the crowd wild. These boys didn’t miss a beat!

The love between the boys and their fans (also known as A.R.M.Y) did not get lost in translation as the fans grabbed their slogans and held it up when the signal ‘ARMY Time’ appeared on the black screen. “It’s been four years since we last came to Singapore!” yelled, RM. While J-Hope said through a translator, “Even during the soundcheck, there were only 100 to 200 people but it was crazy, they were so hyped up.”

As the concert ended, Jimin was moved to tears as the boys waved goodbye to the crowd and disappeared as the stage floor lowered. Getting home became an issue as Stadium MRT Station was flooded with fans and getting out of the stadium was equally as difficult as I had to shuffle my feet for 10 minutes before I could get out of the crowd at the exit gate.

But for BTS, what’s a little shuffle with the rest of the A.R.M.Y?