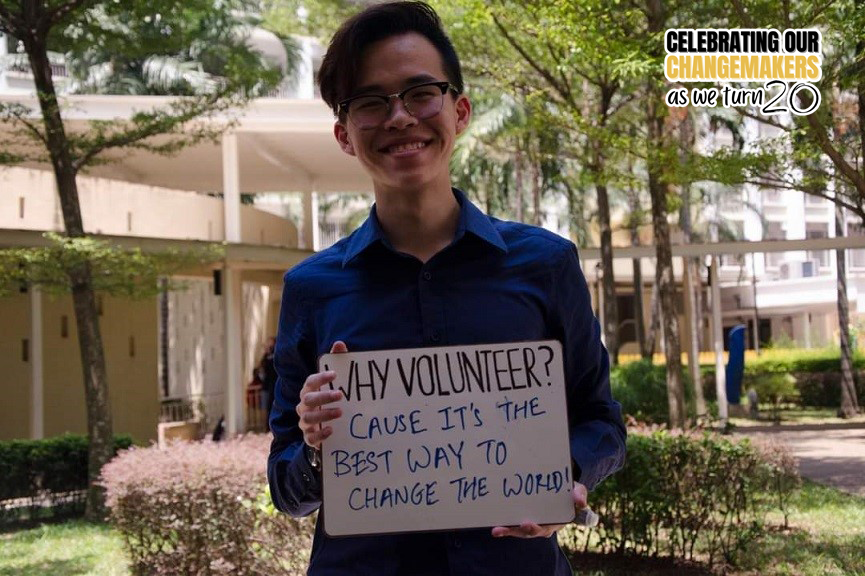 Medical Officer Kenneth Gwee fulfils his long-cherished aspiration to be a doctor. We spoke to him to find out more about his journey in the first story of our RP20 series celebrating our changemakers.

Growing up, Dr Kenneth Gwee, 28, always wanted to do medicine, that was his dream.

He was inspired after watching a TV drama called “Child’s Hope” which featured children with various illnesses and their struggles in life. He wanted to help these children in despair.

Then when he was in primary school, he saw his own family members succumb to cancer. He was overcome with a sense of helplessness.

“I was angry as a primary school kid and I felt extremely helpless. I wanted to do something to change the game, I wanted to be able to fight back. I hated the feeling of not understanding what cancer is, and why we couldn’t beat it,” recalled Dr Gwee, who graduated from Republic Polytechnic’s Diploma of Biomedical Sciences (DBMS) in 2014.

A LONG ROAD AHEAD

However, Dr Gwee’s journey to medical school was long and arduous, in part due to his less than stellar academic performance.

“In secondary school, though my interest was in Biology, I made the short-sighted mistake of not choosing it as a subject as I didn’t like the Biology teacher,” he said. “I was also sloppy as a student and my grades suffered. In fact, they were so bad that my form teacher said I should have just saved money by not taking the O-levels and moved on to the Institute of Technical Education instead.”

Fortunately, he did well enough for his O-levels to qualify for a neighbourhood junior college (JC). But, his success was short-lived as he couldn’t cope with the rigour of the JC curriculum.

Wanting to take control of his own life, he left JC and enrolled in RP’s biomedical sciences.

In spite of the slim chance of getting into medical school through the polytechnic route, Dr Gwee was determined to prove himself to the naysayers.

Throughout the three years in RP, he studied hard to keep up the grades. He thrived with RP’s problem-based learning pedagogy, which, on reflection, is applicable in his job now as a medical officer at the MOH Holdings. (Ministry of Health)

“I learnt how to work with people, through the daily interactions we have in our group settings,” he explained. “No one person is the same. You will have more motivated individuals, some may be less motivated than others, people with different goals, and personalities in a class. Throughout my time in RP, I learned how to interact, how to motivate these different and unique personalities to achieve goals.”

He was also thankful for the guidance from RP advisors, particularly Ms Sandelyn Lua who is no longer with RP.

“She was the Service-Learning executive who gave me advice, guided me when I was new. She allowed me to be myself and I felt free to explore different things in Service-Learning Club, challenged dogma, knowing that I had her support.”

This time around, unlike his time in secondary school, Dr Gwee was laser-focused on being the very best and coming out tops.

He also seized opportunities to develop himself and eventually became the President of the Service-Learning club, where he directed and pushed his team towards the completion of some noteworthy projects.

Among these projects was Project Dreamspiration, which hoped to inspire disadvantaged children to start thinking about their dreams by having a mini ‘career’ fair that showcases different occupations and games.

He had also participated in other projects such as the Dental Mission, an overseas service-learning project to Siem Reap, Cambodia which involved the setting up of a mobile dental clinic in a rural setting.

It was during the same Dental Mission where he strengthened his resolve to pursue medicine.

“My final push to join Medicine and become a doctor was during one of the Dental Missions. There was a pregnant lady who had significant other medical conditions and wanted an extraction. After the extraction by the dentist, she collapsed.”

“There was a local Cambodian doctor attached to us, but he froze when the incident happened. An ICU nurse who was one of the volunteers eventually started CPR. I remembered watching the whole incident unfold as a student and it brought back the same feeling of helplessness and sense of inaction I felt as a kid.” he said.

He eventually graduated from RP in 2014, as the proud recipient of the Lee Kuan Yew Award in Science and Mathematics, as well as the Gold Medalist for the Diploma in Biomedical Sciences.

Referring to Steve Jobs’ commencement speech at Standford in 2005, Dr Gwee said: “Steve Jobs prior to his demise said that you cannot connect the dots looking forward, you can only connect them looking backwards.  Every one of you in RP has your unique potential, therefore, never give up on your dreams,” he said at the end of the interview.