Conjuring up a real scare 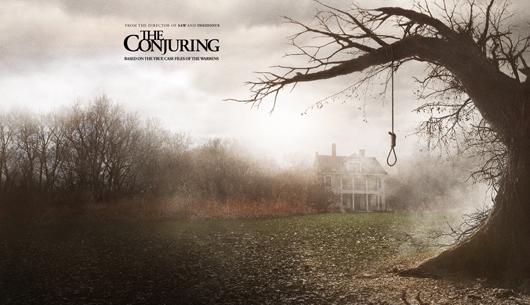 We have all watched the typical horror movie: ghosts popping out unexpectedly, the main lead investigating the basement after hearing loud and mysterious sounds, and the house pet barking incessantly and sensing a “presence”.

The Conjuring makes use of almost all the horror movie clichés you can think of, yet it’s still the talk of the town.

Made with a modest US$20 million (S$26 million), the film reportedly took in double that amount during its opening weekend and as of late August, its North American box-office gross has surpassed US$100 million. More significantly, it has already been (prematurely) called the scariest movie of the year. The marketing has been effective as well: it was heavily promoted as being “based on a true story”, and the family that the film is based on have been giving numerous interviews, adding to the hype.

Set in 1971, the story begins with the Perron family moving into an eerie- looking farmhouse in the middle of nowhere. The first 20 minutes or so are unbearably slow: the characters drone on and on about nothing much in particular. I could care less about what was discussed, waiting impatiently to have a reason to jump in fright. But the tension does start building when suspicious incidents start occurring in their shabby new home.

Once the Warrens, played by Vera Farmiga and Patrick Wilson, enter the frame, things finally start going somewhere. Self-proclaimed “demonologists”, the young couple are hired by the Perrons to find out what is haunting them (and everyone else in the theatre).

What saves The Conjuring from being yet another horror movie cliché though, is director James Wan’s unorthodox filming angles and scare tactics. The suspense throughout the movie is suffocating; Wan sadistically prolongs the scares throughout the two-hour long movie by revealing the horror scenes long after the eerie music stops. This leaves the viewer cringing and wanting the unexpected demon or ghost to pop out quickly just so that they don’t have to sit there fearing for their lives.

However, this would come as no surprise to Wan’s fans. His other largely successful films such as Insidious (2011) and the Saw franchise make use of similar tricks and filming style. He always manages to catch the viewer unawares – one particular scene shows Mrs Perron being alarmed by something strange that is lurking in the closet. We all expect something to pop out from behind the clothes, but instead the camera quickly zooms into a creepy “demon” sitting atop the cupboard, smiling at the camera gleefully.

It is too early to tell if The Conjuring will reach the same level of fame as the cult classic The Exorcist (1973), but the similarities between the two are plenty. Both deal with touchy subjects such as religion and mother-daughter relationships. I could not help but recall Regan MacNeil of The Exorcist fame numerous times throughout the movie, especially during the climax scene.

It seems as though sticking to the same old formula is the key to success, at least when it comes to horror. Movies that have attempted to stray away from tried-and-tested storylines, such as the Paranormal Activity movies (2007-2012) as well as controversial film Let The Right One In (2008), have been fairly successful at the box office but have not been memorable.

The Conjuring, while definitely over-hyped, is successful largely because of the direction as well as editing. Another major factor would be how relatable the film is; after all, it is based on a true story. All in all, this movie definitely would conjure up a few sleepless nights.