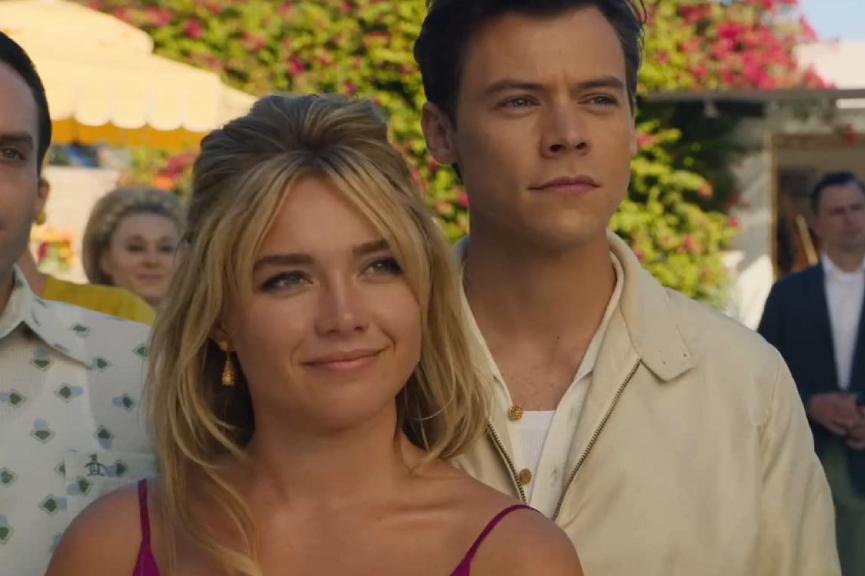 After all of the social media buzz surrounding the film and its stars, one would hope the film would deliver upon its release. Except it did not.

You may have come across one or two headlines about the absolute PR mess it faced prior to its release – from director Olivia Wilde’s polarising remarks about actor Shia Lebouf, to the “spitgate” incident at the Venice Film Festival involving stars Harry Styles and Chris Pine.

Having watched it just days after its’ premiere, I can only conclude that one should definitely be worried, darling.

Set in the dreamy, pastel-hued Palm Springs Desert, the film tells the story of bored and restless housewife Alice Chambers (Florence Pugh) who soon realises that the pristine community of Victory is just too good to be true.

Her suspicions are confirmed when her neighbour Margaret (Kiki Layne) is seen acting aloof what first seemed to be the ramblings of a mad woman Victory’s founder, Frank’s party (Chris Pine). The film then follows Alice as she uncovers the secrets of this seemingly faultless paradise until she realises the dark truth of her residence there.

As someone who has had little to no background in acting, it comes as no surprise that his performance is… a performance to say the least.

However, his co-star Pugh is a tour de force, delivering a masterful performance as Alice.

In the film, Alice begins to suspect that everything in the town seems too good to be true and grows paranoid and fearful of the “Stepford Wives”-esque Victory community. After exploring the town’s Headquarters (notoriously forbidden to residents), she somehow sees herself as her disillusioned neighbour, Margaret. Pugh’s performance of a slow but steady descent into paranoia is a testament to her mastery of her craft.

But it is not just Pugh who delivers in this film. In one of the enthralling scenes in the movie, Chris Pine plays his role as a cunning villain brilliantly – his cool and composed demeanour during a dinner hosted by the Chambers is a compelling juxtaposition of Pugh’s paranoia and rage.

A FEAST FOR THE SENSES

Focusing on technical aspects, Olivia Wilde as a director is bold – unafraid to show her flair and style through dreamy visuals, followed by a thrilling score, and an attention to detail that perfectly captures the spotless-ness of the Victory Project.

It is this attention to detail that makes the film a somewhat masterpiece. If only the same can be said for the plot.

The film’s cinematography is laudable thanks to Director of Photography Matthew Libatique, masterfully portraying the town as a paradise hiding a menacing truth as lush, retro-like shots of Victory are impeccably juxtaposed with spine-chilling, abrupt shots depicting Margaret’s and Alice’s paranoia.

John Powell’s score elevates the film to what it is, adding to the suspense of the film and capturing the audience’s attention right before the next reveal happens. So it is no wonder Styles himself is unable to describe the movie as anything except… well, a movie.

It certainly has the perfect dramatical elements reminiscent of old Hollywood blockbusters with impeccable costumes, outrageous song and dance, and a villain just charming enough to trick one into thinking:  “Maybe he’s not the villain.”

But perhaps it is this over-attention to surface details that distracts viewers from many unanswered questions. Stripped of all the panache, what remains is a flimsy story that can barely hold itself together.

The plot twist, though shocking, is one that contradicts Wilde’s comments about the film spotlighting female pleasure. Rather, the film centres itself around captivity and pain – both physical and emotional.

What baffles me most however, is the lack of closure for most of the characters but particularly Margaret. Just days after its global release, Layne (playing Margaret) posted a series of behind-the-scenes pictures on Instagram with a caption revealing that much of her scenes had been cut from the film.

One would assume that we might get a proper backstory of her or at the very least, some explanation on her peculiar and sometimes chilling actions.

Though it can be assumed that these scenes were cut for time, more thought could have been spent into deciding which scenes should be left on the cutting room floor.

THE FINAL VERDICT – ALL SMOKE AND MIRRORS

With plot holes and loose ends left untied, all that is left is a film that, much like clunky exposition, leaves little if not nothing to the imagination – not something one would expect from a movie deemed as a thriller.

In fact, instead of tying things up, the ending only left me feeling even more confused and riddled with more questions. And just like the film’s Victory Project, the film is simply a smokescreen – promising one thing but giving something else entirely.