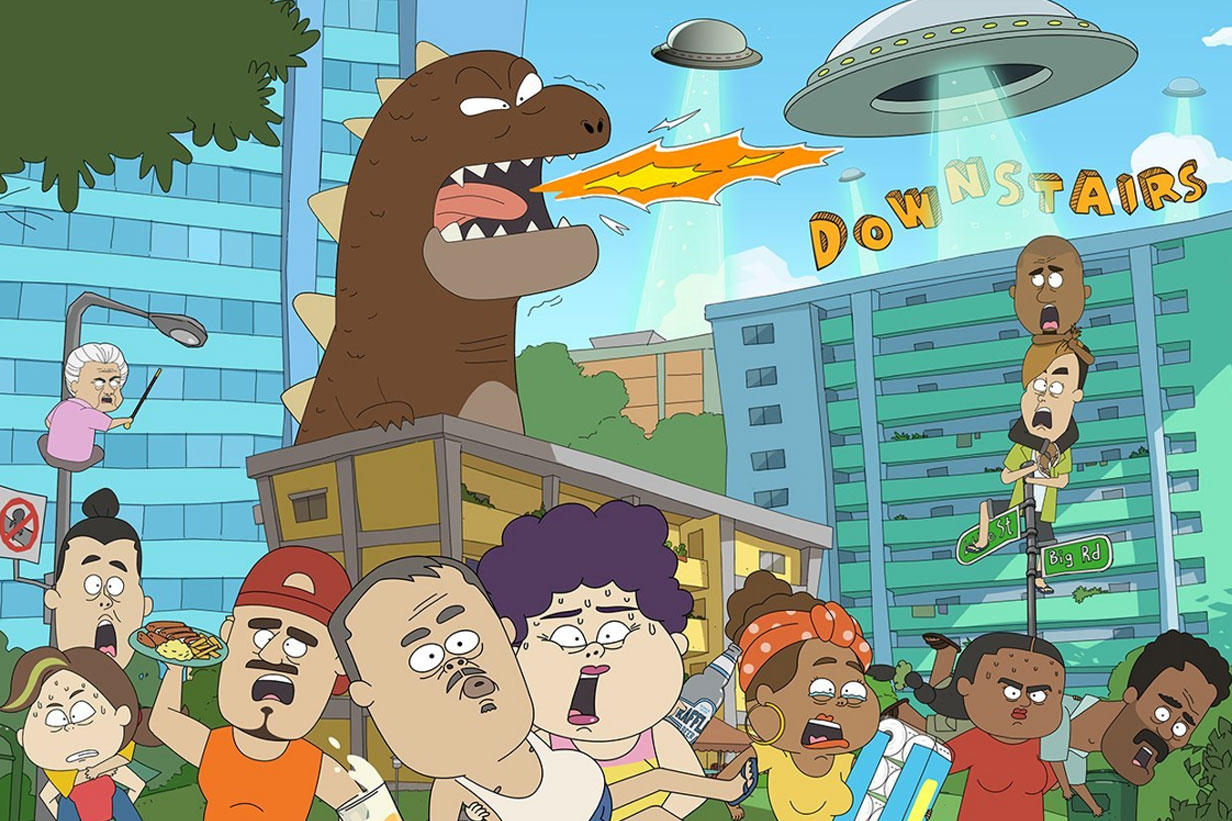 A scene from one of the episodes from Downstairs. (Photo: @godownstairs on Facebook)

If you enjoyed watching The Simpsons, this binge-worthy series is for you.

A scene from one of the episodes from Downstairs. (Photo: @godownstairs on Facebook)

Downstairs, your local adult animated sitcom, features a nutty and diverse cast of talented individuals lending their voices to a bunch of coffeeshop characters that might remind you of people you know.

The series by Robot Playground Ervin Han debuted on MEwatch in 2019 and Netflix in 2021.

This NC16 series follows a group of close-knit coffeeshop stall owners on the ground floor of an HBD block as they embark on day-to-day adventures, showcasing the best and worst in the local community.

EARWORM OF A SOUNDTRACK, STELLAR CAST

The soundtrack, which opens and closes every episode, begins with the characters whistling and humming while swaying side to side to the tune inside your typical HDB lift – a real earworm.

The episodes unfold with a different plot each time, one that is relatable to our daily lives while creating an emotional connection accompanied by a great laugh-out-loud.

The two seasons’ 44 hilarious and lighthearted bingeable episodes offer you a taste of what it’s like to be a Singaporean.

The characters steer and develop each episode and I’m sure you’ll recognise the names behind the animated characters just by their distinctive voices.

The series is both fascinating and entertaining, with some episodes showcasing a futuristic Singapore, with a touch of humour of course.

It involves implanting micro-SIMS in your head. The goal is to steer the nation toward a more harmonious and cashless 21st century.

HUMOUR MIXED WITH A MESSAGE

Beyond the comedy, the struggles, obstacles and choices made by the characters allowed me to learn, understand and empathise with them.

In one of the episodes, Home Quarantine, the characters are issued quarantine orders and the episode explores their ability to handle the situation as they are forced to Work From Home (WFH) due to an “Infectious Salmonella” outbreak that causes the closure of coffeeshops. Sounds familiar?

The scenario begins with a Zoom call among all the characters, and it highlights many of the common problems such as technical issues and instances where some characters complain about each other. Again … sounds familiar?

The episode, while using humour, sheds light on the value of communication in any relationship, especially during a pandemic when people are confined to their homes.

It is undeniable that the tension has pushed some of us over the brink; but the message was that we should use this pandemic to deepen ties, overcome obstacles together, and grow as a community.

The series is not without its fair share of controversial elements which could come off as insensitive to certain sections of the audience. Nevertheless, this show contains lots of cleverly woven storylines with voice actors giving their roles plenty of individuality.

The cartoon version of Singapore’s communal spirit is certainly a worthwhile watch.