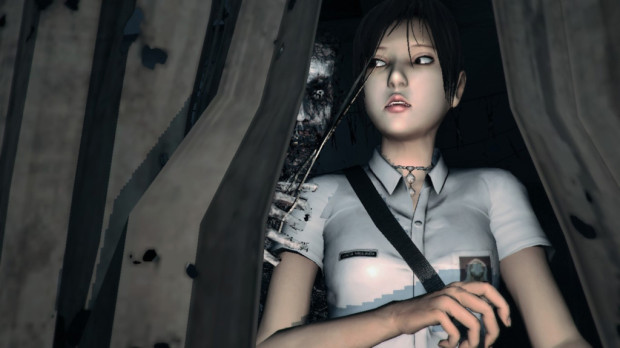 PEEK-A-BOO: Linda Meilinda getting snuck upon after peeking through a pair of curtains. With graphics of high quality and soft, eerie soundtracks, the fear factor in this game is prevalent.

The door slams shut on you. The screams of your friends trail further away. The only way through the door is to find the key – but where is it?

You turn around to face the darkness that has engulfed the dilapidated school. Your only source of light comes from your phone. A call comes from a stranger – she says your name, then static, then an angry voice commands you to leave – and the line goes dead.

You feel something – a presence, presences, way more than one.

You are not alone in here.

From the independent Indonesian game developers Digital Happiness comes their first full release DreadOut, a PC survival horror video game set in Indonesia. Now, this is a particularly interesting point as this setting heavily influences the game’s theme and style.

What do I mean?

Well, much like the renowned Fatal Frame series, the core gameplay of DreadOut involves exorcising spirits and ghosts through the use of a camera (maybe ghosts are camera-shy). However, in this title, you will be able to find spirits you are a lot more familiar with (Pontianak, anyone?), and not in the least bit Westernized like most other games these days.

In DreadOut, you take on the role of Linda Meilinda, a high school girl with some level of psychic abilities who is on a field trip with four other students and a teacher. Typical of almost any horror movie, they find themselves at a road block rather than their intended destination.

For reasons I don’t pretend to understand, instead of going back into the car and Google Mapping another route, the party of six, teacher included, decide that it is okay to go past the road block through a forested area and then find themselves in a deserted town.

While exploring the town, I found something I could really appreciate. The game’s location reflected a really “Asia” feel to it – which really just enhances the whole experience, making it a lot more immersive for me. Apart from that, what adds more flavour to the game is how Digital Happiness has left all the in-game text in Bahasa Indonesia with English subtitles at the bottom of the screen rather than just changing all the text to English.

Back to the game, Linda finds herself separated from her clique within an abandoned school, but with the (somehow) undying battery life of her phone and psychic abilities to see or feel spirits, Linda will be ready to rumble with any ghosts willing to take a shot her.

Now, if you are one to enjoy detective games that require observation and thinking skills, this is the game for you. In her quest to save her friends, Linda will have to go through several puzzles while battling the horrors of the night. The puzzles of the game, while not too difficult to solve, can need a lot of observation on the little details, such a key that is hidden out left in a corner.

Despite visual indicators from Linda’s abilities to sense important objects, it can be rather frustrating and straining to find certain items when you are in a constant state of hyper-vigilance that something may be creeping right around the darkness. Which brings me to my next point – jump scares DO happen every so often, so be warned that the spook factor is still strong despite the means of retaliation against the spirits.

However, what I enjoy most about DreadOut is the amount of details put into the game and storyline. Within the game, there is a spirit encyclopedia that tells you the backstory of each spirit Linda captures, and all of these backstories, along with snippets of newspapers and horrific scribbles on papers, help you piece together the mystery of what had happened to the town and its people.

Overall, I’ll give this game a 4/5 for its amazing graphics, well thought out story plot, and the refreshing change of putting the game in a closer-to-home context.

7096 views
Recommended Reads
The Republican Post Reviews: This Land Is Mine

Xu Bin and Nathaniel Ng’s Relationship: The Start of Something New

Reunion: A coming together of twists and turns that keep you watching

By Nurul Insyirah A man found along the shores of more

Who is the real Christopher Yeh?

WandaVision: The Evolution of Wanda Maximoff

By Raushana Binte Shaik Mohamed Salim After being more

A Soul-less attempt at a Pixar classic