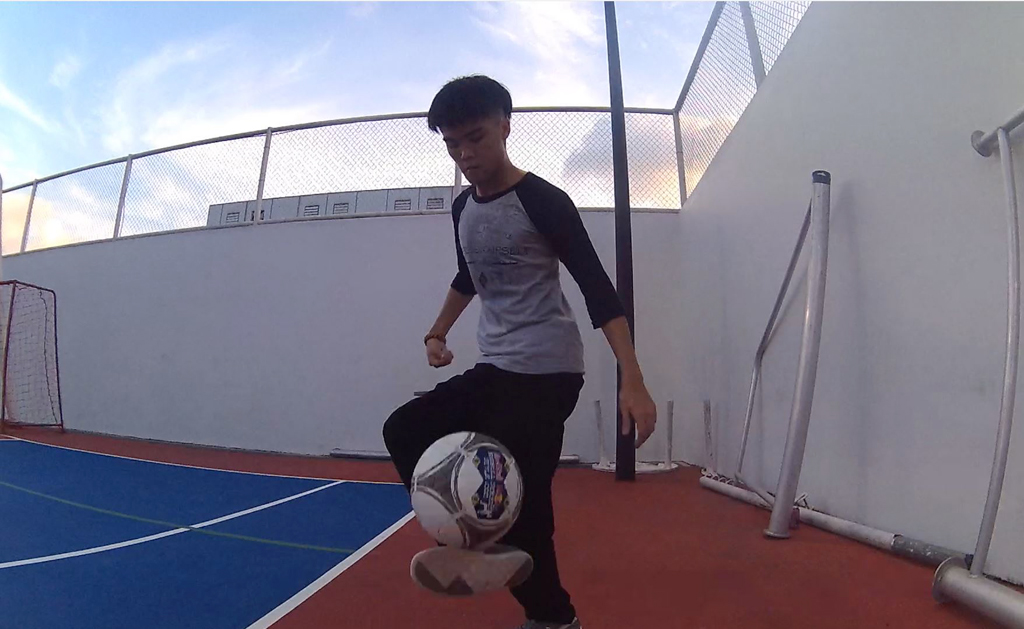 JZ: Congratulations on your success in going to Brazil. When did you pick up freestyle football and why?

DL: Thanks. I picked up freestyle football when I was 14. However it was on and off then. I was a committed footballer and I was really into the sport. Back then I remember going to the neighbourhood street soccer court to play football. After a while, I went to the football trials but I failed at it. So from then on, I picked up freestyle more often and it was then I realized I could really do “something” with freestyle football. Initially, my dream was to play football, and be a national player. It failed, so I eventually just continued with what I had.

It’s not really that different, it’s still football. Just that it’s more of performing and entertaining others with your tricks.

JZ: Would you say that it’s more of an art form?

DL: You can say so, as for freestyle I mix a bit of dance, so you can say it’s an art form.

JZ: What made you fall in love with freestyle football?

DL: I think when I was really young I was affected by my dad. He’d talk to me about players I didn’t know when I was young, at age nine.  Players like (Diego) Maradona and (Eric) Cantona. I also played a lot of FIFA. I didn’t really go out and mingle with others. I stayed at home and played a lot of football games. I think the love of football constantly grew over a period of time. And from then, I just kept at it, and kept doing what I did, doing freestyle football.

JZ: How many hours do you practise a day? Can you walk us through your practice process?

Right now it’s more of practising the key components of what you want. Freestyle has so many elements. It has grown to the extent where you can have Uppers, using your head to do tricks. You can also have Lowers, where you’re using your lower body parts to do tricks. You can also have Sits, where you’re sitting down while doing tricks. So you have to really focus on a particular one. Normally for me, I spend my two hours to focus on one thing in which I want to improve in, or to be really consistent in. So from there I just, train very hard for the two hours, and then after that I rest.

JZ: Tell us more about your creative process. When you go up on stage, how much of it is improvised and how much of it consists of pre-planned tricks?

DL: It depends, because there are different kinds of freestyles. For performances, of course it has to pre-planned, because I’m doing a choreographed show. So I have to prepare everything and train for it. Because other than doing just the tricks, I have to pay attention to the music as well. I have to practise my routines for performances. However, for a battle, it’s a little different. It’s about doing a more original trick, as compared to a routine trick. You have to come up with something that is new and difficult.

JZ: What do you need to perform all these tricks?

DL: For example, if you want to do a particular trick, you have to understand how it works. When I first started, I wasn’t firm. My hands were like jelly. You have to be firm. Next, you have to concentrate on spinning the ball. The spinning itself is very important. If the spin is weak, the ball might not even stay on your finger. It’s also a bit of theory. It’s not just doing and doing. Sometimes you must really go and study about it. And also, you must understand your body and you must be comfortable with how you want to do it. Let’s say you’re a beginner and you want to do a specific trick. I would tell you to juggle first. Because once you’ve learnt how to juggle and you’re comfortable with it, you can do it your way. Once you have the basics, it’s much easier. A reason why people give up freestyle football is that they cannot go through the basic process – which, for a normal person, is approximately six months – just to learn juggling.

JZ: Is dance an important asset to your craft?

DL: For me, dance is a different element that you have to incorporate into freestyle. It’s either you don’t want it, or you want it. For me, I personally want it. I had to learn from scratch and that’s also a reason why I went into SGC (Style Groovaz Crew). I went for practice sessions with them and slowly built up my confidence. It’s a bit of a hip-hop attitude, being original and stuff.

JZ: How was the experience in Brazil, and how has it helped you in growing as a freestyle footballer?

DL: Ultimately, some people might just think of it as a competition. I would think otherwise, as in Brazil I got to know many different freestylers, the elites of the elites. The best are there. It’s kind of pressurizing… (laughs) because I’m the only Singaporean down there. I feel in Brazil, it’s more about making friends than to really compete. There is a community down there that really supports what you’re doing, even though we might have different styles, even though we might come from different countries and even though we might have some language barriers. It’s about sharing the same passion and love for the sport and I think this is something that I cannot get anywhere else. It’s really nice to share something you love with someone. I would really like to thank the community there as they’re really supportive and humble. And it’s really heartwarming to see all of that.

JZ: Do you have any advice for anyone who might want to pick up freestyle football or is just starting out?

DL: I think you’ve got to really go home and practise your juggling really hard, as it is a really important element in freestyle. You have to go back to your basics first. Don’t give up, and just do what your heart tells you to do. Don’t stop halfway, don’t waste your time. Just go for it. You may have obstacles; people could ask you: “Hey, why are you playing with a ball? Why are you doing that?” Don’t care about them. Don’t care about what they’re saying. Just do what you’re doing. This is your passion.

Check Daryl Low out at his Instagram at instagram.com/d_lowwx