Good service can’t save this café

Located at a corner on the first floor of the Shoppes of Marina Bay Sands, the DC Comics Super Heroes Café is quite a sight as it stands out among the branded stores surrounding it. Welcoming you at the entrance are the wax figures of Superman and Batman, getting me all excited to try out the food.

There are two sides to this café; on the right side, which you will walk past first, is where diners go to have tea or coffee with their Superhero-themed desserts. On the left, you will see the restaurant.

Incorporating all the main characters of the DC Universe, names of the food served, beverages as well as desserts are named after superheroes. You will find that next to the superhero name of the dish is a helpful description of what the dish is. 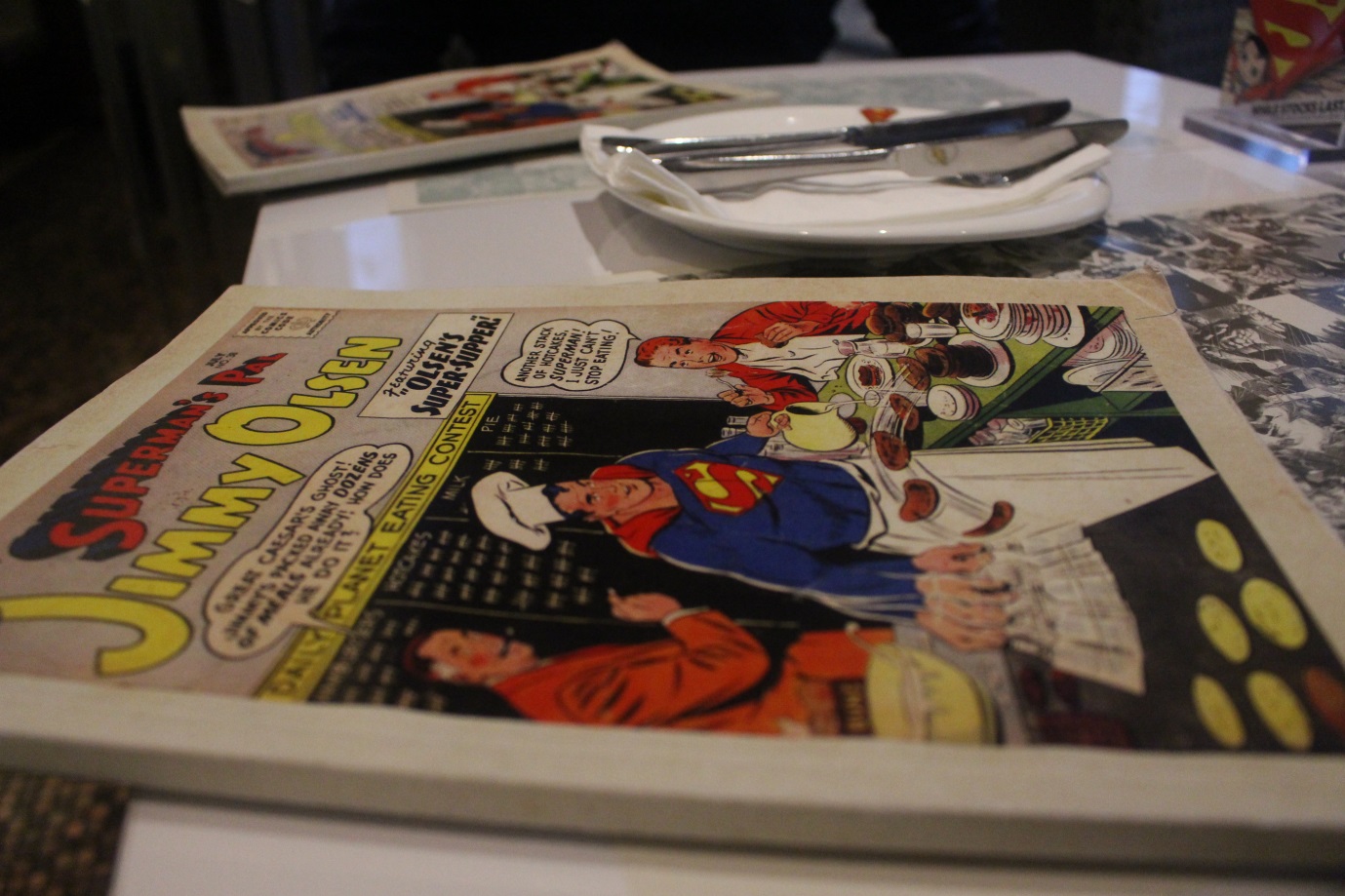 When we settled down, the staff provided us with the menu to peruse. The menu resembles a comic, enhancing the entire “superhero experience”. 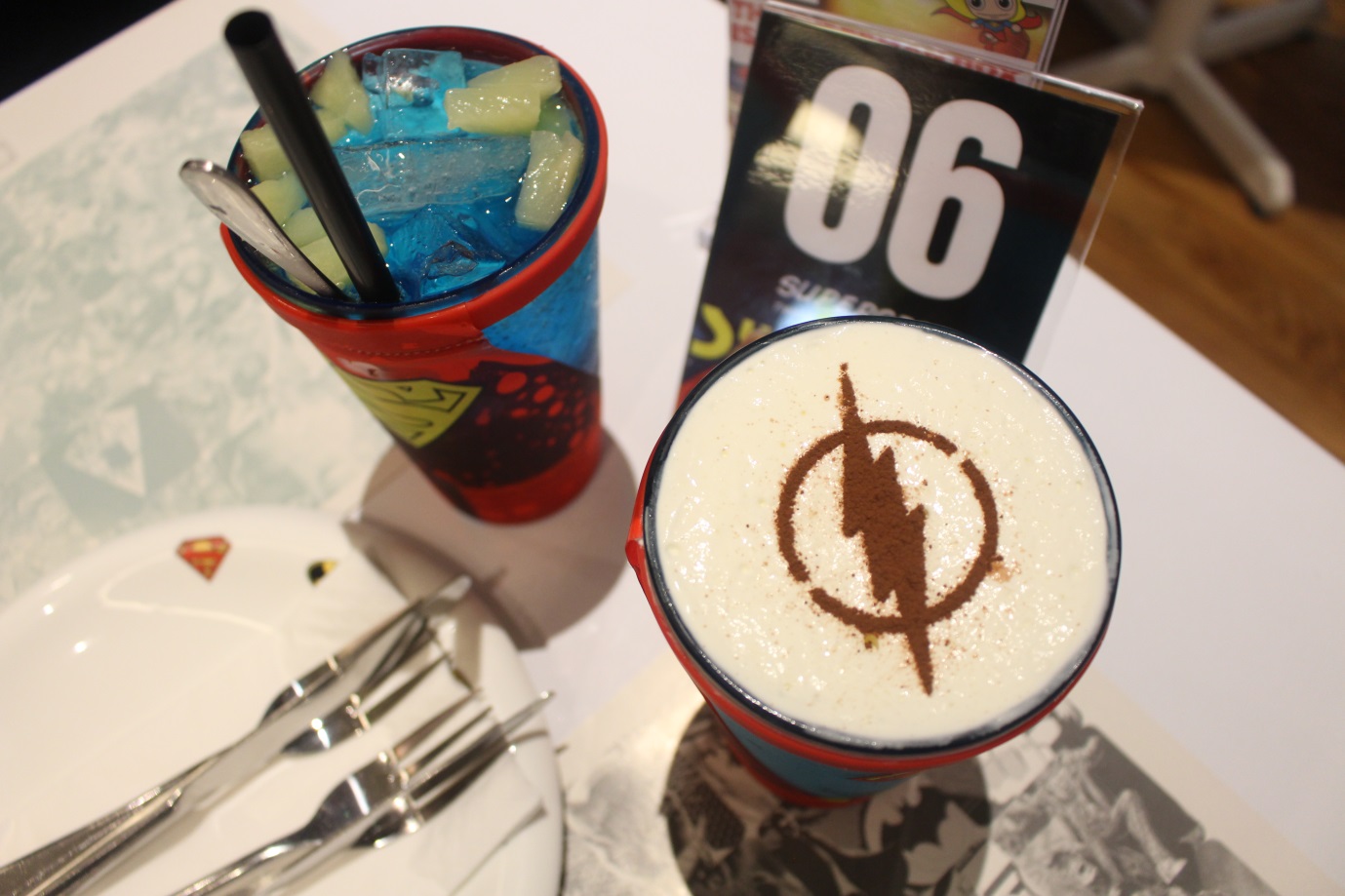 The two drinks we picked from the menu were “The Flash” and “Man of Steel”. For “The Flash”, it was basically a strawberry milkshake which tasted too sweet in my opinion and the “Man of Steel” was a blue Italian soda with chunks of pineapple, both of which cost $9.90. I think they were worth only half that amount. 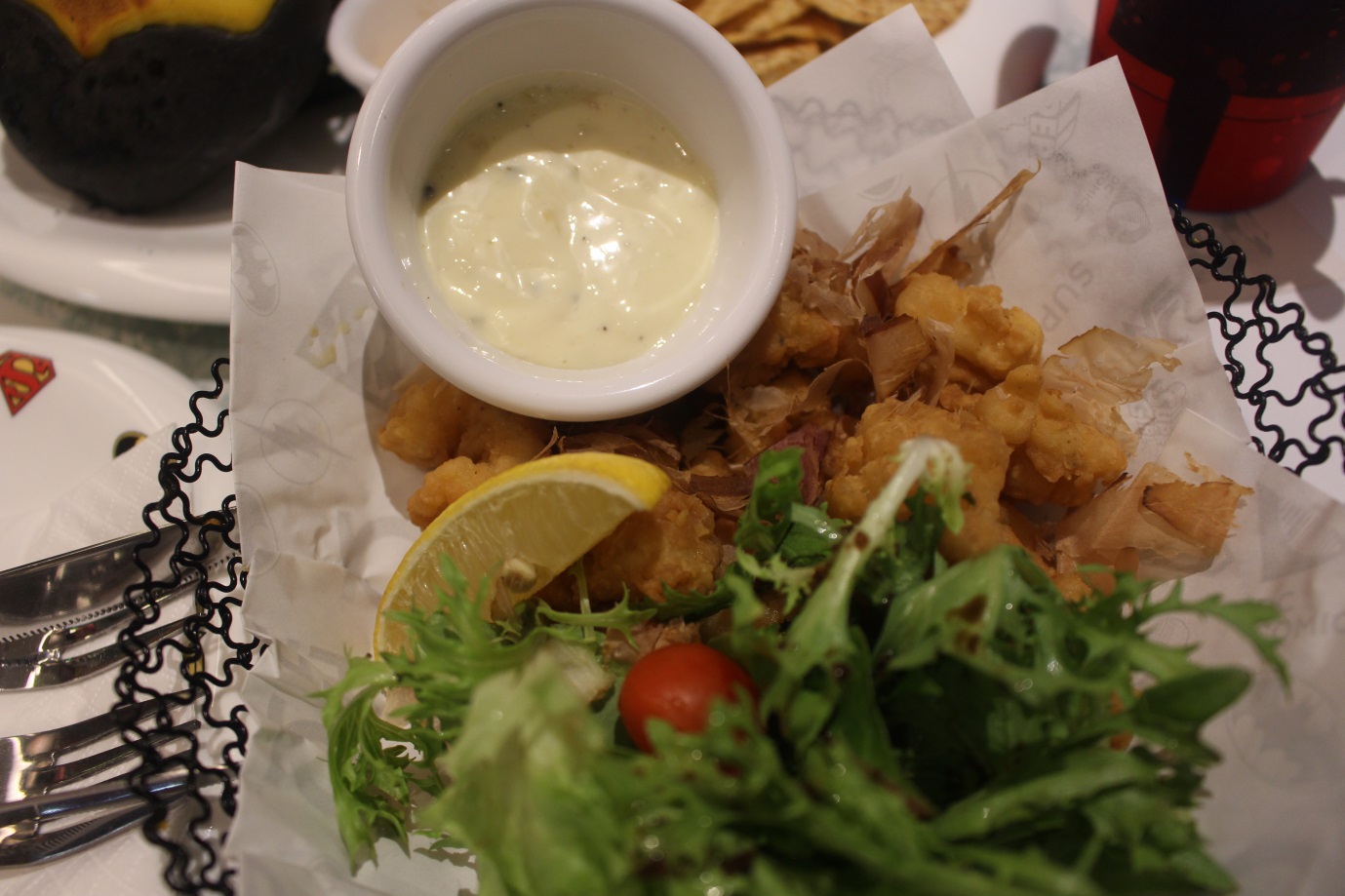 Our first starter came – the café’s signature “Penguin’s Squid” ($14.90), which basically was fried squid with tartar sauce and salad. I was rather disappointed with it though; it tasted really normal and there was no superhero “feel” to it. 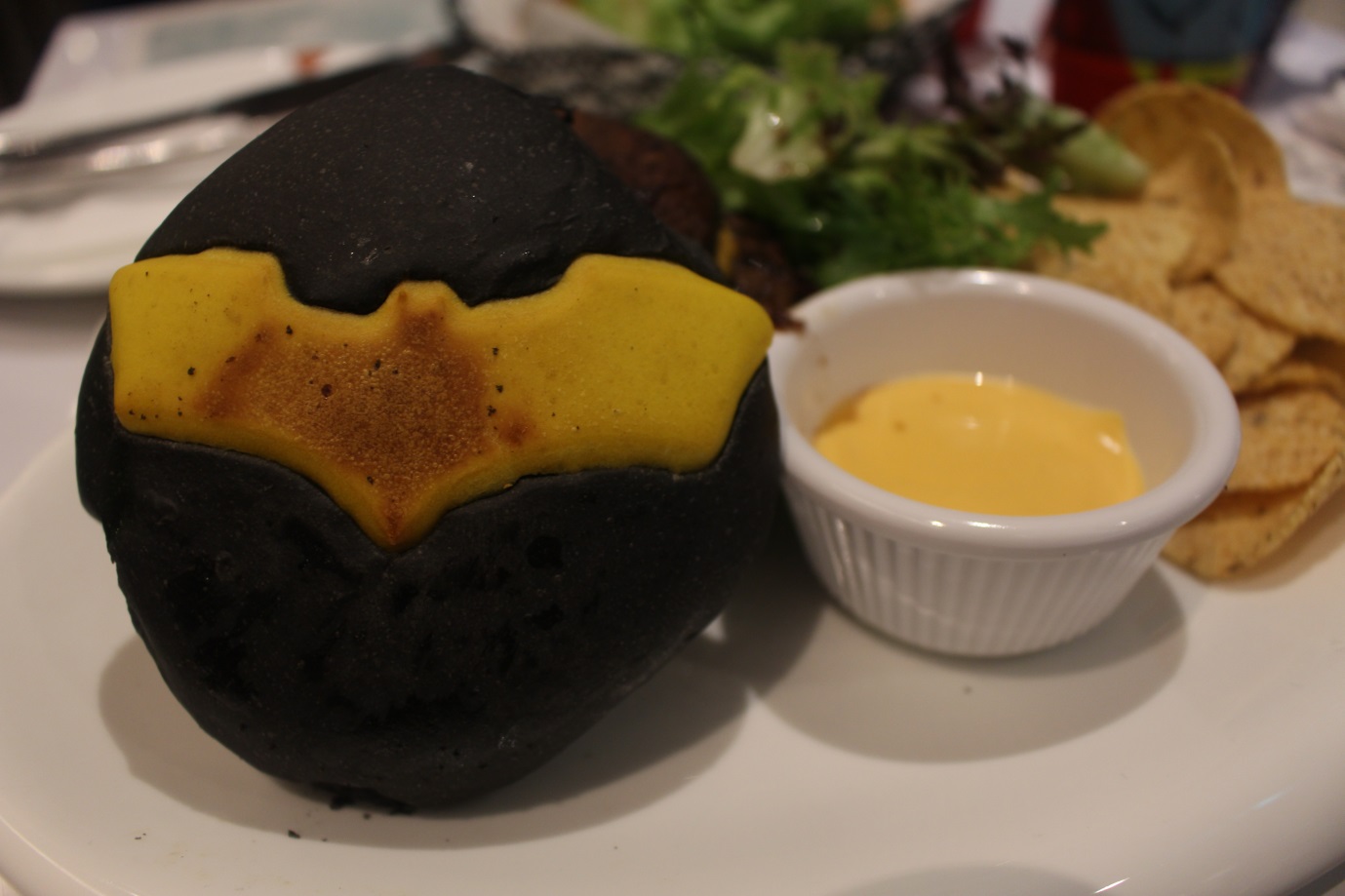 The next dish which came was the one of the main courses; this was another of their signature dishes, called “Batman’s Burger” ($28.90). This was a wagyu beef burger filled with cheddar cheese, onions and mushroom with a side of nachos and salad. The burger was not bad; the buns were on the crispy on the outside and soft on the inside, with the juice of the beef seeping into the patty. 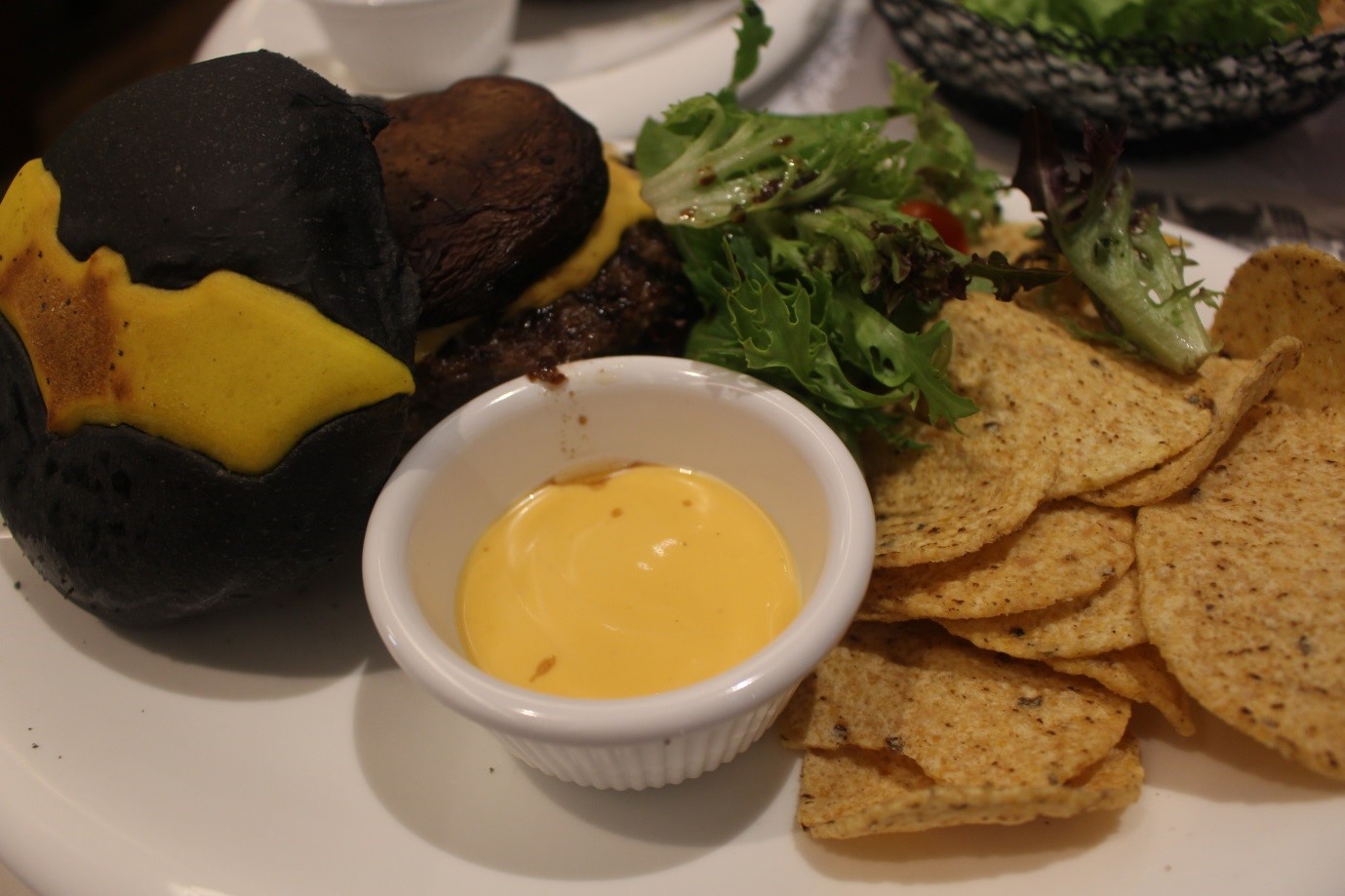 The patty itself was soft and juicy, but I did request for the beef to be cooked medium rare. The burger was better than expected but there are definitely better burgers in Singapore worthier of your $29. The nachos and salad were a disappointment, no different from the ones sold at popcorn stands at the cinema. 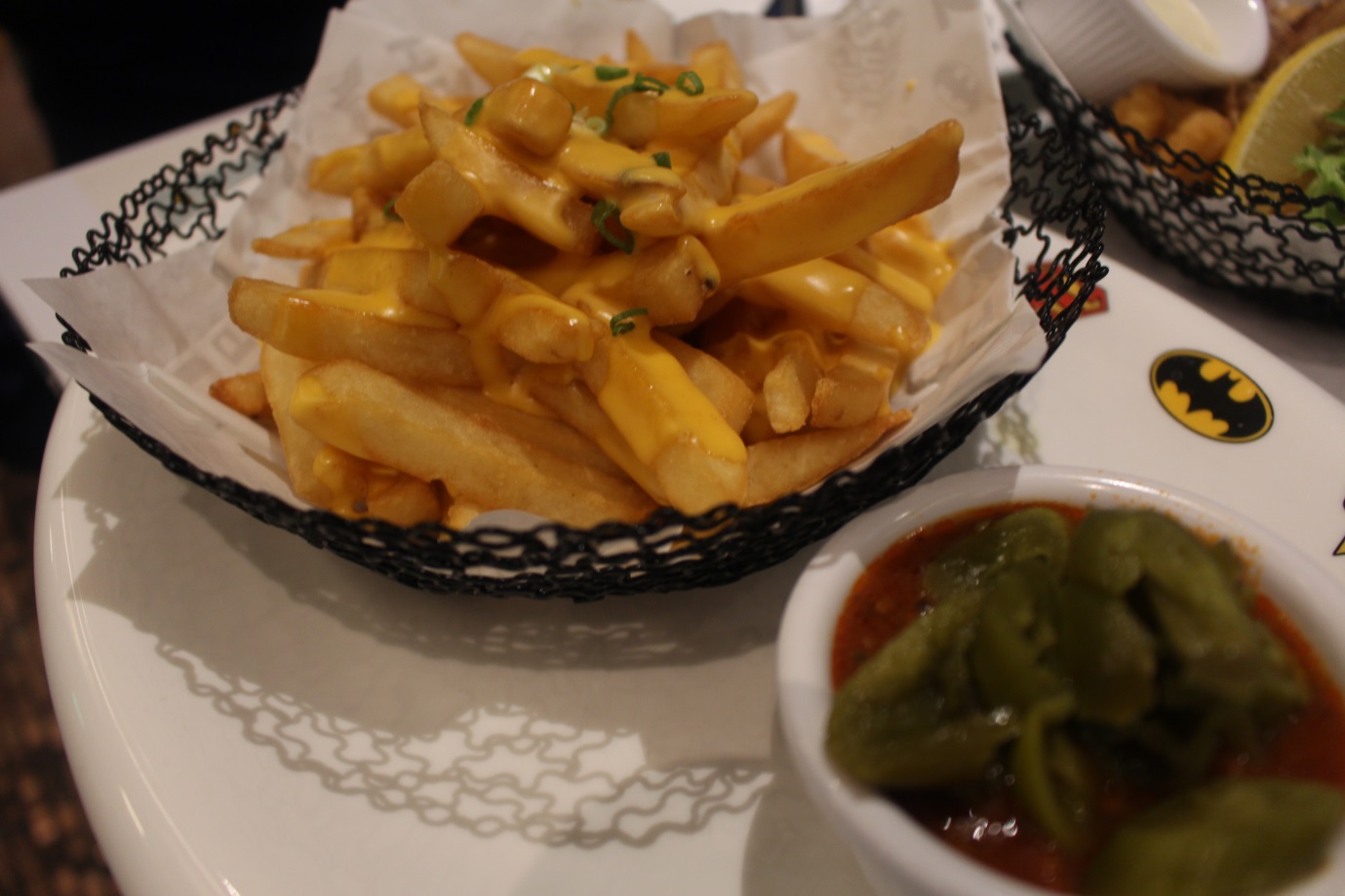 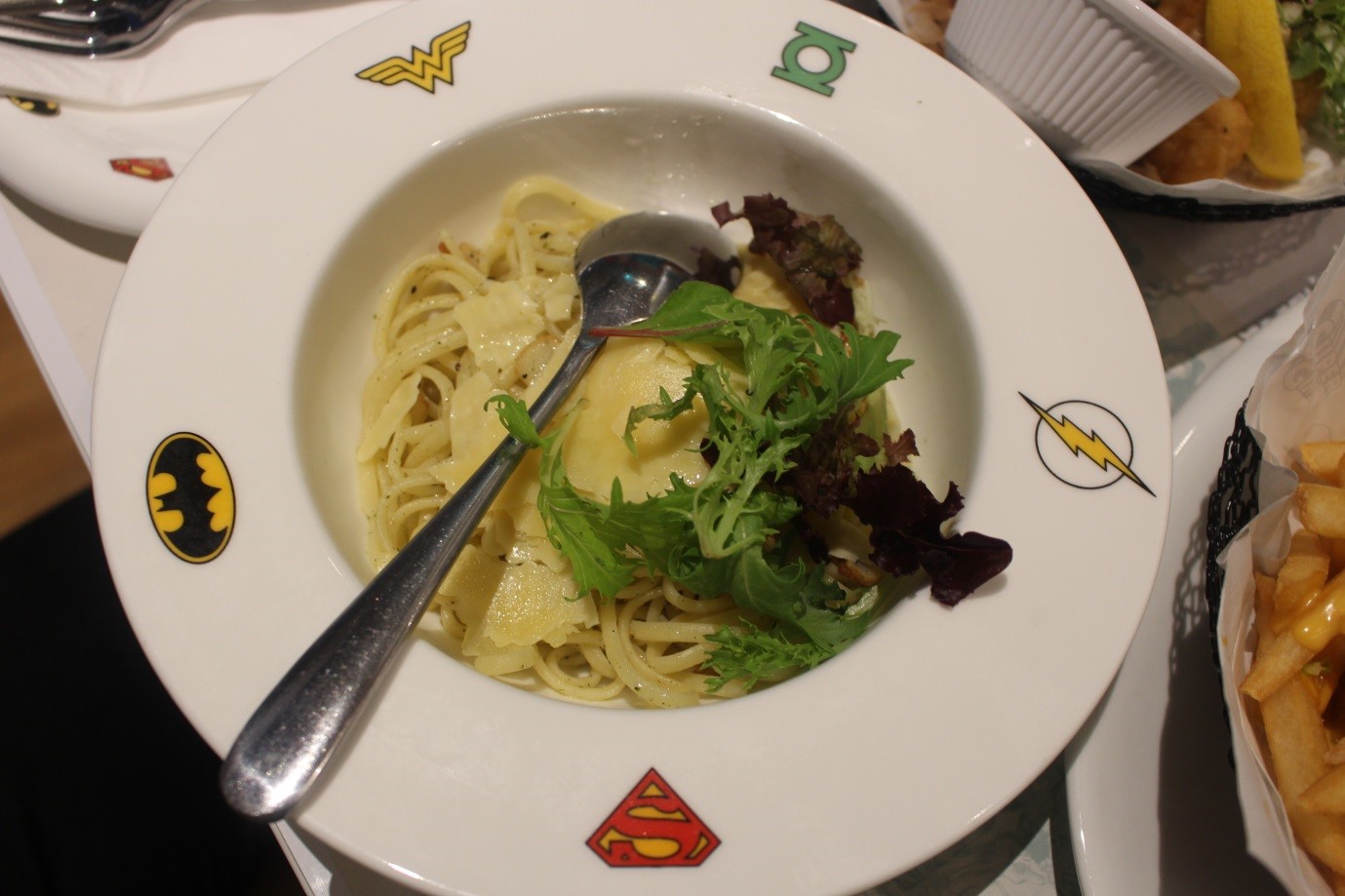 The last main which we had was the “The Flash Pasta” ($19.90), which was basically aglio olio. All I could taste was the oil and some spices. There was barely the taste of garlic. In comparison with Pastamania’s aglio olio ($9.90), I would rather spend less money for a slightly better quality of food. 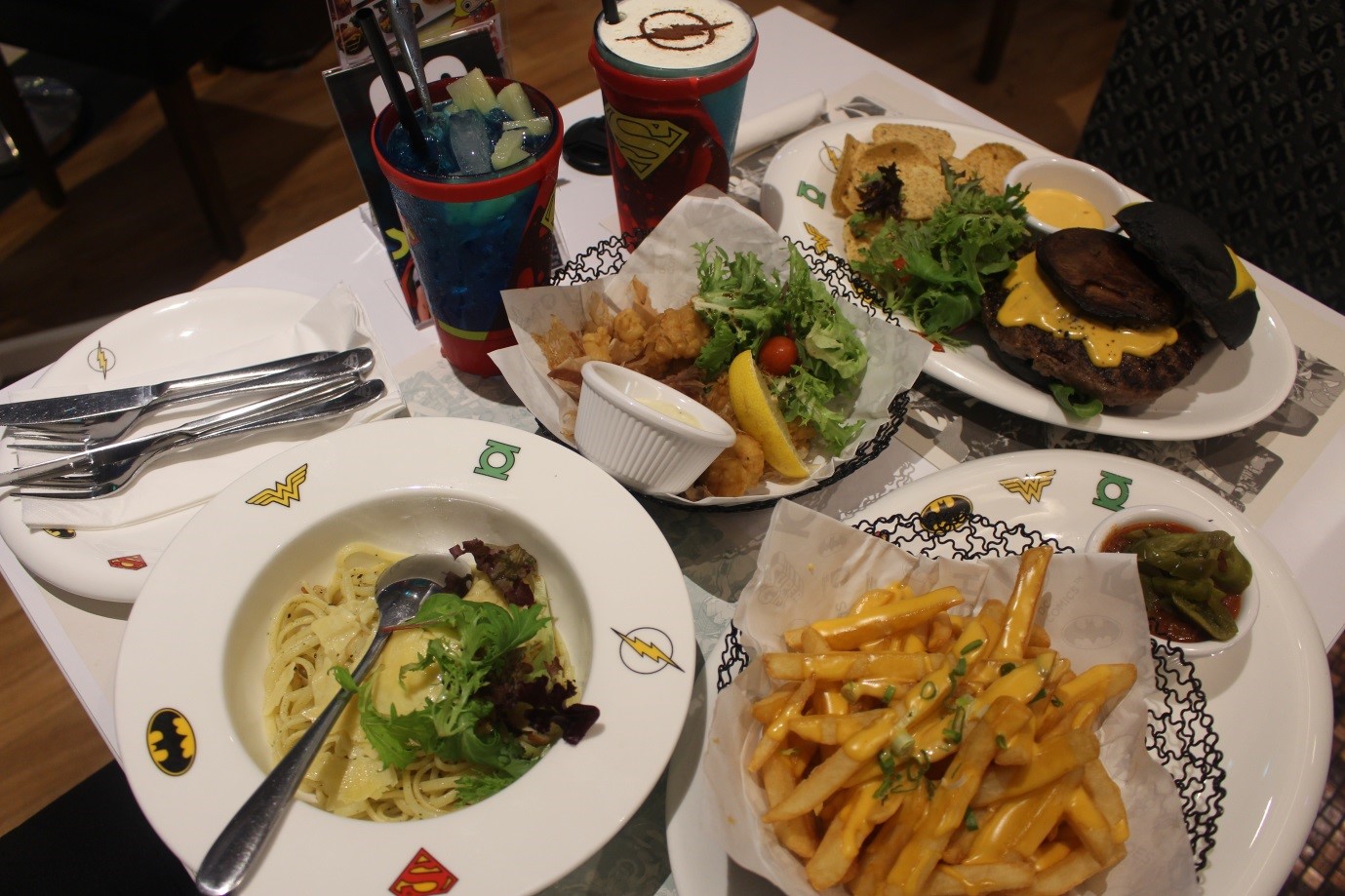 Overall, the bill came up to $114 (including GST & service charge) for the meal, which I felt was not worth the money because I can find better burgers and pasta at a fraction of the price. But despite the average food quality, the service was great; I would definitely give it an 8/10 for the service there.

The staff was really polite and nice; they came back to ask if we needed additional or top-up of sauces. The entire “superhero” feel was mostly there via the décor and items until you eat the food. Still, I give them props for taking the effort to dress up some of their food and utensils.

I highly doubt there will be another visit to this café, unless the food improves.