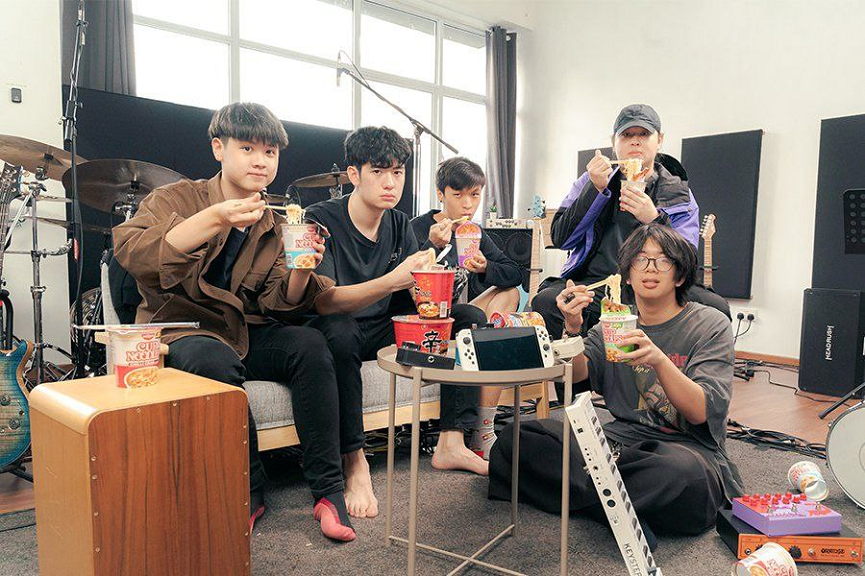 After a three-year break, the band made a sensational comeback by winning the IGNITE! band auditions beating seven competitors.

If you were to scroll down Aggressive Raisin Cat’s (ARC) Instagram feed, you would come across a post advertising their slot in the finals of IGNITE! Band Auditions. “Come down and watch us lose to every other band!” declared the bold caption.

Anybody unfamiliar with the band would chalk it up to Gen-Z humour, or a certain self-deprecating slant. Judging by ARC’s performance at the finals, however, the caption could not be further from the truth.

“I really didn’t expect to win. We weren’t even expecting to play on such a stage!” said Jannsen Chang (vocals) in an exclusive interview with The Republican Post.

In order to get to the finals of the annual event hosted by IGNITE, ARC had to send in a video of them performing and then hoped for the best. The entire process took around a month and it did not go as planned.

“We really didn’t expect to be here, let alone win… the video was so horrible. We shot it on an iPhone and Aaron [Devoy] (guitars, designated favourite white boy) was even using our camera to check his hair out!” The group burst into peals of laughter.

Despite their chaotic audition process, it was clear that their unity as a band, coupled with their talent pushed them through to win the auditions.

What gets a group of 20-something young rockers going and motivated? The feeling of the crowd jamming along with the band as they perform is a feeling like no other. During their one-song show at the finals, a bunch of ARC fans stood at the front of the stage, egging Jannsen on as the band waited for the all-clear from the judges.

ARC launched into their song Ramen, drastically changing from awkward jokesters to a band serious about their mission. The fans switched up too, thrashing their heads and screaming along to every line. It became obvious at the end of the night that ARC would be a force to be reckoned with.

Halfway through the interview, Jannsen’s phone rang. It’s a friend on the line. “Yo, I’m a rockstar. Did I tell you I am a rockstar? We’re being interviewed by a newspaper,” he said.

He hung up the phone and returned to the interview.

“I’m not actually gonna be a rockstar lah,” he said. The band consists of several students, and an NSF, and being a band in Singapore full-time is a volatile career choice. But for now, they are young, and watching them storm the stage, one gets the feeling that it was something that they relished despite everything. Aaron added that playing as a band is a great experience for them.

It would be one of those things they would cherish. The camaraderie, the joys, the friendships.

What sort of music drives a young-ish metal band in Singapore? The members cite Periphery, Ginger, and Bad Omens as influences.

“Personally I am very inspired by TikTok music,” Jannsen said. The band erupted into laughter.

As for now, riding the highs of winning IGNITE! Band Auditions, ARC mulled over their victory (“The one thing I learned from this whole experience is never to walk from Woodlands MRT to here”) and considered their future (They have an EP out in the next month or so). It is probably good that they started to plan, as they did not have a setlist for the 30-minute slot on the IGNITE main stage, having not expected to win the band auditions in the first place.

If you would like to check out ARC, come on down to IGNITE! at The Republic Cultural Centre for the music fiesta (29 July).

Don’t miss the opportunity to see them in the flesh!