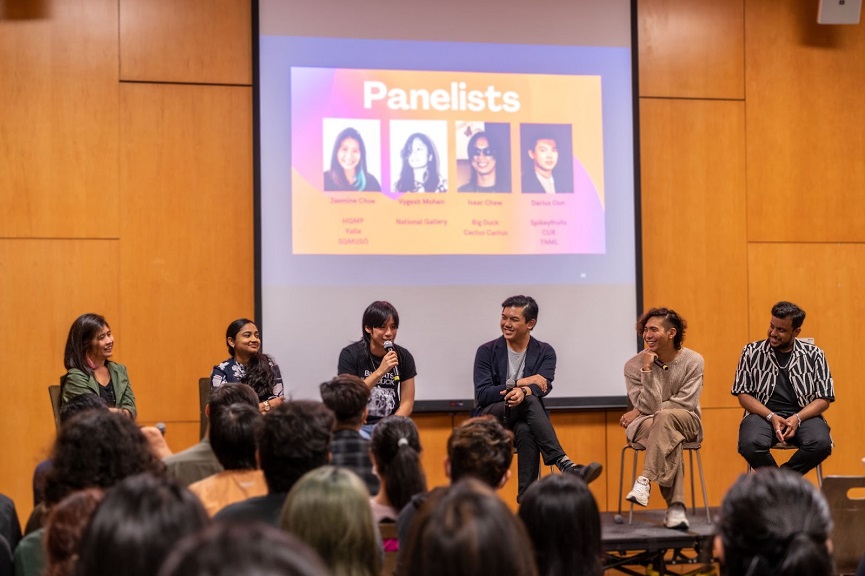 Ignite Incubation sessions were conducted over three days in July as a lead-up to IGNITE! music festival last month.

Held over three sessions on July 21, 26, and 28 at The Republic Cultural Centre (TRCC), the IGNITE! Incubation sessions were special workshops conducted by esteemed guests from the local music scene.

The first session was a sharing by Zendyll Music on Artiste Essentials 101, while the second was a Bandlab Creator session and the third was a lecture performance by Maker Records.

Here are some key highlights from each session: Russell Goh and Sharham shared what artistes must have in an Electronic Press Kit. (PHOTO: @Qualitykelp)

The two-hour-long session was divided into two parts.

The first part was led by Russell Goh and Sharham from Zendyll Music label, who shared what artistes need to have in an Electronic Press Kit (EPK). Essentials in an EPK include but are not limited to, music releases and album art, press photos, artist bio, press coverage, music streaming statistics, and accolades.

They also gave insights into how a music label works, such as having to give artistes a certain edge to be appealing, providing recording studio spaces, covering the track production cost, and marketing the artistes.

The second part of the session was a panel discussion revolving around the theme of community.

The panelists in the discussion were Darius Oon, Isaac Chiew, Jasmine Chloe, and Vygesh Mohan. All of them are involved in the music industry in one way or another, but with different roles, came different perspectives.

Darius and Isaac are in bands and manage their respective music-related companies.

Darius belongs to two bands, one of which is The New Modern Lights, who performed at the IGNITE! Main event 2022 and Coming Up Roses. He is also the label manager of Spikyfruits, the sister label of Where are the Fruits.

Isaac, on the other hand, is in the band Cactus Cactus and manages Big Duck Music, an independent gig promoter and online music editorial publication.

Jasmine and Vygesh work with both musicians and visual artists frequently.

Jasmine is also the founder of YALLA, an artist management, and creative consultancy company. Furthermore, she works with SGMUSO, a local charity that aims to provide financial assistance to those in the music community who were badly impacted by the Covid-19 pandemic.

Vygesh is an arts programmer at National Gallery Singapore. She was also a freelance producer for LUSH 99.5 FM radio and was under the mentorship of Venessa Fernandez, LUSH 99.5FM assistant program director. Despite their differing backgrounds in the industry, they shared a mutual love for the music community.

Some main takeaways from the panel discussion were the importance of inclusivity, open-mindedness, and safety in a community.

While Singapore has come a long way in becoming more open-minded with music, there is still progress to be made regarding inclusivity.

With the Covid-19 situation progressively becoming more controlled, and with more gigs and shows making a comeback, Singapore’s local music scene is only set to continue to evolve for the better. Bandlab is a social media and an on-the-go music studio rolled into one, allowing anyone to create music, collaborate with fellow Bandlab members and share their music with the Bandlab community online for free.

The focus of this session was to advertise Bandlab and provide a demonstration of how Bandlab worked.

According to Amon, Bandlab makes it easy for anyone to jot down sudden ideas or inspiration that come to mind since Bandlab allows you to sync your music progress on Bandlab on both your mobile phone and laptop.

Bandlab is tailored to make creating music easy and convenient for anyone, be it beginners with no musical experience or more seasoned musicians.

MAKING MUSIC ON THE GO Sean showing off Bandlab’s collection of copyright-free themed packs for anyone to use. (PHOTO: @Christeenaelizabethtc)

One of the most unique features of Bandlab lies in its ability to make music on-the-go.

To demonstrate this, Sean whipped out his MacBook and started displaying the different features in Bandlab.

From Copyright-free packs to an autotune feature, he produced half a track from scratch, breaking down his thought process and how he makes use of the different attributes available to bring his ideas to life. This session was hosted by Bennett Bay, a classically trained musician, Bakers in Space, a local indie rock band, and Marc Nair, a poet, and a teacher.

It was insightful due to the behind-the-scenes look at the thought process of the various artistes behind their creations. The artistes would perform their selected pieces first, share more about the creation of the song, and discussed it with their fellow artistes about music.

Some of the pieces included Sundance and Crying Clouds by Bennett Bay, Drifters and Vesuvius by Bakers in Space, and Plasticpelago by Marc Nair.

What stood out about this lecture performance was that it did not solely comprise musical performances but a poetry segment where Marc performed his original spoken word poetry. According to Marc, he was the “spanner in the works” for those who expected him to perform music pieces.

There was clear admiration and respect between the three as they discussed their music journeys and how they developed as artistes. Bakers in space, in particular, played two songs from different eras in their lives. The first song that they played was Drifters, from their first EP “Implosions.”

The upbeat song was composed around 2015 on a looper and was released two years later due to their national service obligations, with heartbreak being the central theme.

Finally, the second song they played was Vesuvius, with the theme in this song being more serious, dealing with emotions about losing someone you love and never getting them back again.

Eugene later revealed how he still enjoyed playing the old songs but got an extra kick from writing songs that would not top the chart or would be popular among the masses.

Overall, there was a lot learned from the Incubation sessions, about the importance of community and how music is connected to different art forms, based on different perspectives.

In the words of Marc Nair from Maker Records: “Words are universal, why wouldn’t the musicians in the crowd appreciate it? It’s just an instrument like any other.”