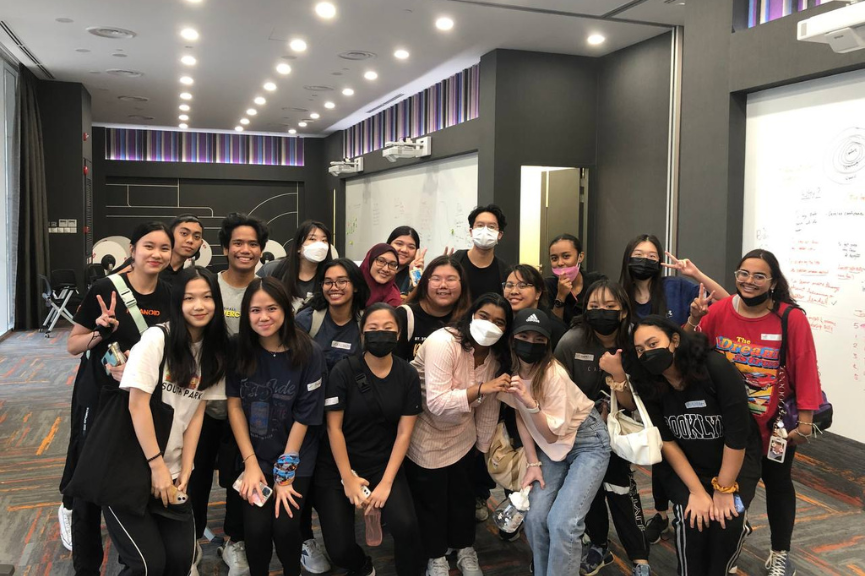 The DMC Leadership camp was held on Sept 19 and 20, involving student ambassadors, leaders in the Diploma in Mass Communication (DMC) and its interest groups. (PHOTO: DMC Student Ambassador archives)

Leadership camps challenge one to think out of the box and to learn to work in teams. Here are two memorable learning moments for me at the recent DMC Leadership Camp.

The DMC Leadership camp was held on Sept 19 and 20, involving student ambassadors, leaders in the Diploma in Mass Communication (DMC) and its interest groups. (PHOTO: DMC Student Ambassador archives)

To me, being the head of an interest group is pretty much like being a company’s CEO.

Not only do you have to be skilled in the craft your company is peddling, but you also need to be accountable for different departments and ensure that your group runs like a well-oiled machine.

I’m about a month into my role as a Chief Editor, and despite my two-and-a-half year-long tenure in the Republican Post, the leadership camp I attended recently made me realised that I still have a lot to learn about being a leader.

Although I’d been to adventure camps before, this one felt unique. This two-day camp was designed to push us beyond our comfort zones, and as someone who lives a mostly sedentary, desk-centric lifestyle, I knew that physically, it was going to be a major challenge for me.

Since I’ve never held a position as important as Chief Editor before, all I know about leadership comes from leading small groups, observing other leaders, and, most recently, participating in a leadership camp held for DMC student leaders.

Ultimately, I learnt many lessons from that fateful camp, but here are my biggest takeaways.

LESSON 1: DO NOT BE AFRAID TO MAKE MISTAKES

As someone who fears failure and the consequences that follow behind the mistakes that I commit, that always brought out my inner saboteur.

Our first group activity was the key punch, which was escape room-adjacent. A long cord formed a circle on the ground, and 20 cards were splayed out within it.

We had to arrange the cards based on the order of the numbers printed on them, but there were some twists – the first was that the numbers were communicated differently (eg. languages, symbols, dwarves); the second was that they had to be arranged in a specific order.

As I led my team, we analysed the cards and tried to give values to each of the numbers, but as soon as we tried to arrange them, we were disqualified immediately when we picked up one of the cards.

I started to overthink – maybe the order of the cards mattered, which was why we couldn’t pick up the cards, though I wasn’t the only one, as my teammates also proposed different theories. I wanted to finish this game as quickly as possible, but as the team leader, I was at a loss because we lacked the necessary expertise in the game to do so.

I quickly realised the importance of making mistakes. Since the activity was relatively low-stakes, we would not suffer personal losses, nor would we be faulted if we slipped up. Rather, we had to make mistakes to know what we should and should not be doing.

After a few rounds with this new trial-and-error mindset, we determined a few of the rules – we could not pick up the cards, move them, nor move the cord. However, I felt very discouraged mid-game as the end was nowhere on the horizon. Even after both teams came together to decide what we could and could not do, it seemed like everything we tried was in vain.

After a while, the instructors stopped the game and revealed the game rules to us, many of which we had previously discovered, except one – We could only arrange the cards in order using our thumbs. As soon as this was announced, the room was filled with a mix of grumbles, laughter, and exasperated sighs.

Though we did not win, I realised that perhaps it is not such a bad thing to go with trial-and-error on top of instincts, and that it is necessary to make mistakes sometimes to progress further.

While I aspire to have the killer instincts that most powerful CEOs and leaders have, the capability is one thing, and attitude is another. Making mistakes is not the end of the world, rather we should have the right mindset to fully absorb the lessons we gain from them.

Though we may not always fulfil our goals, making strategic mistakes and learning from them might help us to get closer to them than we thought.

Arguably, the most memorable part of the entire camp was the final activity, All on Board: a trust fall-esque experience that involves a group of four standing on an A4-sized platform 12m off the ground, with nothing to hold on to but each other.

As we scurried into teams, Deputy Chief Editors Isaiah, Aisha, RepTV Chief Tanya, and I rushed to form our “motley” crew of four. With my heart palpitating furiously, determining the prospect of falling off the platform with my belayer off guard, resulting in my demise, we decided to volunteer to be the first team up.

We quickly discussed the order of ascent, and I was second, right behind Isaiah. I was still feeling a flurry of emotions that before I knew it, he was already at the top of the pole. Filled with trepidation and a touch of acrophobia from an experience with another high element, I made my way to the pole. It was much taller and more unstable than I initially thought, shaking back and forth as I was climbing up.

The final steps up were the hardest; there was no railing or support around the platform, so I had nothing to cling to, except for my teammate already on the platform. Isaiah reached out his hand and offered it to me while encouraging me for a good five minutes, and I was afraid that I would slip out of his hands, flinging myself back and smacking headfirst into the pole.

Though there was still some uncertainty whether he would be able to support me and pull me up, I decided to take a leap of faith and trust him. Grasping his hand as I pushed myself onto the platform from the pole’s wired steps, I even surprised myself as I landed on the platform successfully.

I ended up sitting on the platform by his feet, clinging onto his legs like a koala as I looked down at the other end of the 12m pole. He gave me his hand again to pull myself upright on the platform, and though I was shaking in fear, I realised that if he could pull me onto the platform without flinging off it, he could pull me up without the both of us falling off and slamming into each other in mid-air.

It was another moment of trusting my team and psyching myself up to stand upright, but I did it. It was genuinely one of the greatest and most terrifying experiences of my life so far.

Though we were not able to execute the activity properly in the end, I came to understand the importance of trusting my team because without teamwork, it will be harder to pull ourselves higher and go even further… It is paramount to trust that your team will not let you down, as long as you are all working towards a common goal.

Conversely, when there is a lack of trust between a team, it can cause conflicts, interpersonal problems, and when fatigue prevents us from solving internal issues, how are we supposed to put in the effort to do what we are supposed to?

As mentioned earlier, this was different from other camps I had attended previously, because this was the camp where I decided I wanted to make a difference and trust the process that I will come out a stronger person. As cliché as this sounds, I think that’s what leadership is truly about.