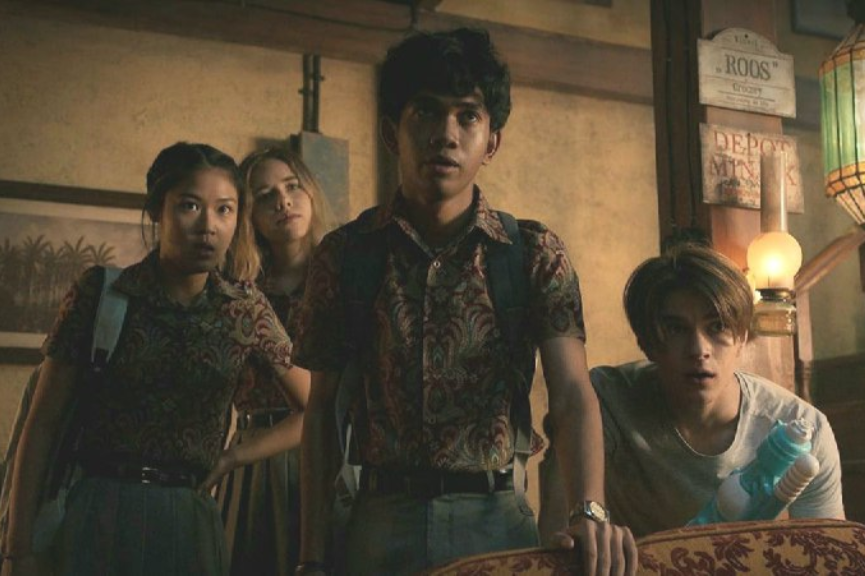 Thirteen episodes of sheer awkwardness and humour that even checking your GPA is more horrifying.

Mr Midnight: Beware the Monsters is a Netflix adaptation of the eponymous book series written by Australia-born writer, Jim Aitchison or better known as James Lee, and it recently ranked Number Eight under the TV programmes category on Netflix.

In the first episode, while workers were busy demolishing a construction site, an urn with what seemed like a spiral symbol breaks, freeing the spirits from within. This explains the supernatural encounters the people of Tanah Merah face.

Ling went to Tyar’s house to head to school with him, but who would have known that this was the start of everything strange. Tyar had found a bird with a broken neck in his house and felt a sharp spark when he touched it.

Soon, strange things started to happen. Tyar was able to heal Nat’s broken arm when a man told him to, “sembuhkan dia,” which translates to “heal him”.

The plot gets even more bizarre when Tyar is the only one who sees the man and no one else does. Perplexed by this, Tyar then proceeded to grab Nat’s arm and seemed possessed when ‘healing’ him. This is where the adventure begins for the four of them.

The group decided to make videos of their experiences through a character called Mr Midnight, in hopes of attracting fans and new ideas for their adventures.

True enough, in the following episodes, the four curious cats find themselves facing Asian spirits ranging from Toyol, a green child-like spirit, Jikininki, Jiangshi which is a Chinese hopping vampire and Pocong which is a ghost that is said to be the soul of a dead person trapped in their shroud.

It is not long before Tyar finds out that he is a Dukun, a traditional healer and spirit medium, just like his mother and grandfather who had passed away while trying to defeat the Hutan Lahir. Yes, she is back.
Not for good though. Tyar had found a book used by his late kakek, or grandfather, to defeat evil spirits and demons. It was this book that had taught him rituals to help save Tanah Merah.

The storyline was tiresome at times, but what made up for it were the bits of humour added into the show. At some point, it got me thinking about whether this show was meant to scare viewers or to make them laugh.

One of the scenes I will never forget is at the end of episode four where the Jikininki sent a picture with her tongue sticking out to Ling’s phone. Confused, Ling said “Instagrave?”, a pun on the popular photo and video-sharing application. That was definitely a funny one. The writer did a good job of adding humour to the script.

The makeup team did not miss the mark on the humour as well. Case in point: although the actress who played Jikininki sounded frightening, I laughed non-stop when she appeared on screen. The makeup is probably one of the reasons why this show is not as scary as I thought it would be.

DRAGGY START? AN EVEN DRAGGIER ENDING

The show was really draggy, especially towards the end. I was just waiting till I got to the last episode of the show.

As some may have guessed, Tyar saved Tanah Merah but with the help of his mother. After all, they are Dukuns who can communicate with spirits and protect the people of Tanah Merah.

The show felt like it was longer than it should be, with some redundant scenes that had little or no impact on the plot and ending.

The script was really tedious which caused the show to feel as though it takes forever to end. It was so bad that for some episodes, all I wanted to do was fast forward to the credit scene.

The mediocre acting could be another reason why the show felt draggy. While I was not expecting top-notch acting, some of the cast seemed stiff and unnatural.

Although there are areas of improvement, the ending has an unpredictable twist, which could potentially signal a second season.

The final verdict – to watch or not to watch?

With poor acting and scripting, this show is more humour than horror. If you don’t mind awkward moments, you can watch some episodes just for laughs and for entertainment. However, if you are someone like me who gets bored easily, you are not missing anything if you give this a pass.