NDP 2022: A parade bringing Singaporeans together 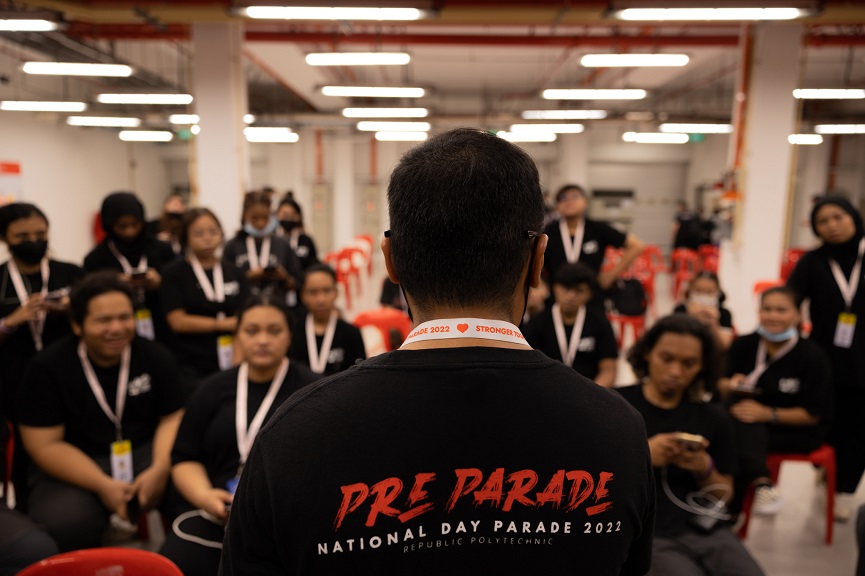 Before The Storm: Jeremy Leow, the RP staff in charge of the Beats Encore performers giving a final pep talk to the RP performers before their performance. (Photo: CAYABYAB JOHN)

The National Day Parade is back to its full scale after two years of hybrid performances due to Covid-19.

Before The Storm: Jeremy Leow, the RP staff in charge of the Beats Encore performers giving a final pep talk to the RP performers before their performance. (Photo: CAYABYAB JOHN)

THE FINAL TOUCHES: Haris, 21, one of the RP performers, gets his final touches in a mass makeup room where many makeup artists help the performers look good on stage. (PHOTO: SAVANNA TAI)

SAY CHEESE: Sabrina, 18, one of the RP performers at the pre-parade segment where RP is performing just before the cameras go live on national television. (PHOTO: EUGENE TAN)

THE DOUBLE SHACKLE: A staple in the National Day Parade, 4 F-16s performed the double shackle where two pairs of jets will cross each other and engage their afterburners. (PHOTO: EUGENE TAN)

EYES FRONT: A rare sight seen once every five years, the Total Defence Display (TDD) is a showcase of the SAF, SCDF and SPF’s operational capabilities. Here, we have three SAF soldiers performing a simulation of securing the perimeter. (PHOTO: EUGENE TAN)

HORMAT! TEMBAK!: A classic segment in the parade and ceremony, the Guard of Honour Contingents perform a salute, called the Feu-de-joie or Fire of Joy, where blanks are fired three times to salute the President. (PHOTO: EUGENE TAN)

ISEKAI LAGI!: Guard of Honour Contingent from the Singapore Police Force loading the next round into their rifles for the feu-de-joie. (PHOTO: EUGENE TAN)

EXPLOSIVE ENTRANCE: A explosive sight for the audience as the second half of the Total Defence Display (TDD) simulates a bus being hijacked with soldiers from the Special Operations Task Force (SOTF) using live explosives to breach the bus and rescue the hostages. (PHOTO: EUGENE TAN)

LOOK ON THE BRIGHT SIDE: Opening chapter two, Lights in the Dark, singer-songwriter Aisyah Aziz illuminates the stage and serenades the audience with ‘You will be Found’. Chapter two pays tribute to frontline workers and resilient Singaporeans for support and to let them know they are not alone in their struggles. (PHOTO: EUGENE TAN)

NOT ONE BUT AS ONE: With their song, ‘We are a Symphony’, local acapella group, MICapella opens chapter three, “Many Families, One United People” with their powerful, melodious voices. The song symbolises Singaporeans’ harmonious unity despite facing prolonged adversities. (PHOTO: SAVANNA TAI)

ANTHEM OF UNITY: Closing chapter three, Shabir stirs up the patriotism for our homeland with Singai Naadu. The performance is brought to life with soulful vocals and graceful dancers as they move to the alluring music. (PHOTO: EUGENE TAN)

THE SPOTLIGHT IS ON YOU: This year would be Taufik Batisah’s second time singing the theme song for national day. His first time was in 2005 where he sang and performed Reach Out For The Skies. (PHOTO: EUGENE TAN)

WE, THE CITIZENS OF SINGAPORE: Before the national anthem is played, the pledge will be taken by everyone on the float. It is one of the rare solemn moments in the parade, where a pin can be heard if it was dropped. (PHOTO: EUGENE TAN)

HIP HIP HOORAY!: At the end of Preview 2, the RP performers managed to get a picture with Shigga Shay, Taufik Batisah and August the NDP Mascot. (PHOTO: HAYLEY FOONG)

ENDING WITH A BANG: Every year, to celebrate National Day, a fireworks spectacle will take place as the last item of the National Day Parade. (PHOTO: EUGENE TAN)