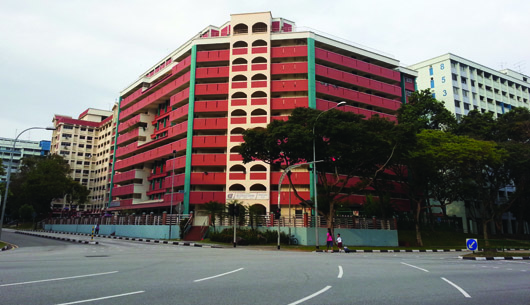 When it comes to the term ‘haunted flat’, an aged, off-white building instantly comes to mind. With vandalised en­trances that have been haphazardly boarded up, corridors sprawling with overgrown weeds and the ominous creaking of rusty door hinges. Wood­lands block 852, however, is absent of such standard Hollywood clichés.

Tucked in a sleepy Woodlands estate, the block blends in with the rest of its unassuming surroundings. With its relatively fresh coat of red and blue paint and sleepy heartland facade, complete with a readers’ cor­ner and kindergarten at its void deck, it is certainly a place that is more quaint than creepy.

That being said, expectant haunt­ed house hunters need not be too disap­pointed in its un-intimidating exterior. Unbeknownst to the casual passer-by, the pasty walls of the building shroud chilling tales from the past.

There are varying theories re­garding the origin of its infamy, but the public’s morbid interest in the building began as early as 2003. Local internet forums are littered with threads docu­menting its history as a quarantine fa­cility during the SARS period. While the flat was also said to have been sub­sequently converted into a rent-only hostel for construction workers, there are stories that it was a hideout for drug addicts.

“From what I heard, the flat used to be rented out to the Bangladeshi workers, and there were also a lot of drug addicts there. They would sneak into the block and use it as a gathering place to get high,” said Romawati Ra­him, a 25-year-old who works at the church op­posite the block.

The most famous theory, however, has to do with an inci­dent that hap­pened in March, 2009. A 51-year-old mother, who was reported to be mentally un­stable, stabbed and killed her teenage daugh­ter. Following the incident, stories have emerged of how the spirits of the pair still haunt the block.

“I’ve heard about a Malay family seeing a female ghost on the 5th floor. But I have not seen it for myself,’’said Lawrence Douglas, a 75-year-old who lives on the 6th floor of block 852.

A similar account is also mirrored in greater detail by 60-year-old Yan Mei Ling, a resident on the 10th floor.

“I heard that late one night, when a man was taking the lift down to the 1st floor of the block; he saw a mother and her daughter in same lift. He asked the mother why she was taking her daughter down at such a late hour, but she kept silent. When the lift reached the first floor and he looked back to allow the pair to alight, he found that they had vanished and there was no one else in the lift apart for him,” said Mdm Yan.

Despite the bulk of the ‘evidence’ being unverifiable, third-person an­ecdotes, the paranormal mystique of block 852 continues to be maintained. Of those interviewed, almost all of them said that they harbour some be­lief in the supernatural origin of such incidents and would ‘rather be safe than sorry’.

When asked about whether he genuinely believed in the presence of apparitions, an 8th floor resident, 44-year-old Jared Lam, replied: “We are Asians after all, that’s all I have to say.”Alluding to the superstitious na­ture of Asian cultures and their respect for the occult.

However, not all are convinced of the presence of apparitions in the block. 26-year-old Ong Wei Xiang, who walks past the block daily as he commutes to and from work, prefers to ignore hearsay and puts trust in his own senses instead.

“I have heard of these stories from people around the area, but I think it is merely word of mouth, things they have heard from their families and friends that cannot be proven. Person­ally, if I cannot tangibly sense the presence of the spirits myself, I will remain skeptical about their existence.”