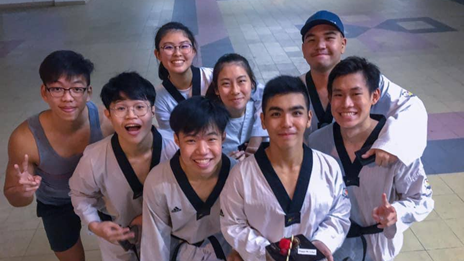 An all-rounded and passionate individual, 20-year-old Ng Zi Bin shares about how he managed to juggle his passion for his hobby, Taekwondo, and his studies.

Being a student typically involves having many responsibilities and having good time management is key. For someone like Ng who is a keen martial arts exponent, who teaches self-discipline, time-management is a breeze.

As a former student in Republic Polytechnic (RP), Ng had pursued a diploma in Mobile Software Development at RP’s School of Infocomm. His keen interest in technology, specifically Blockchain fuelled his determination to excel in his studies. He also represented the school in competitions, earning several accolades in the process. They include representing the school in competitions, receiving awards through Module Prizes, and being inducted into the Director’s Roll of Honour for four semesters consecutively.

Although Ng has secured his academic bag, he has also proven to excel in non-academic related activities, such as taekwondo. He has been awarded bronze, silver, and gold medals in many competitions, such as the National Taekwondo Kyorugi Championship and the People Association Taekwondo Federation Competition between the years 2015 and 2018.

His taekwondo journey started back when he was Primary Two. Ng quickly developed a passion for the sport and decided to pursue his interest by joining various competitions as he enjoys the process and achieving new goals. With grit and determination to succeed, he earned his first medal, a bronze, at National Taekwondo Kyorugi Championship in 2015.

“Even though I only won a bronze medal, it made me realise how much I love the sport,” Ng shared.

Although he takes pride in his taekwondo-related achievements, he feels that the sport is more than just about punching and kicking. To him, it is a sport that is rich in values such as self-discipline and perseverance.

His journey was not always smooth sailing. He recalled how he had sustained an injury a week before a national competition in 2016. He felt even more determined to participate in the competition as giving up was the last thing on his mind. He managed to speed up his recovery process by getting sufficient rest and applying medication to heal his injury.

“I went for the competition with the mindset that it is okay to lose and most importantly, knowing that I have tried my best,” he said.

Another challenge that Ng had to overcome was juggling between his responsibilities at school and his commitment to the sport. However, he always made sure he completed all his schoolwork before he went for his training sessions.

Ng is currently a black belt Taekwondo player. However, he recently sustained an ankle injury that is still healing. Yet despite his injury, Ng still makes an effort to participate in the sport as a volunteer coach at his taekwondo club to help children master the basics. He also plans to further his studies in computing-related courses at a university and hopes to own a tech start-up in the future while still pursuing his interest in taekwondo.

When asked if he had any advice for students with equally big dreams, Ng said: “Always be open to learning new things and (do) not be afraid to try and to fail.”