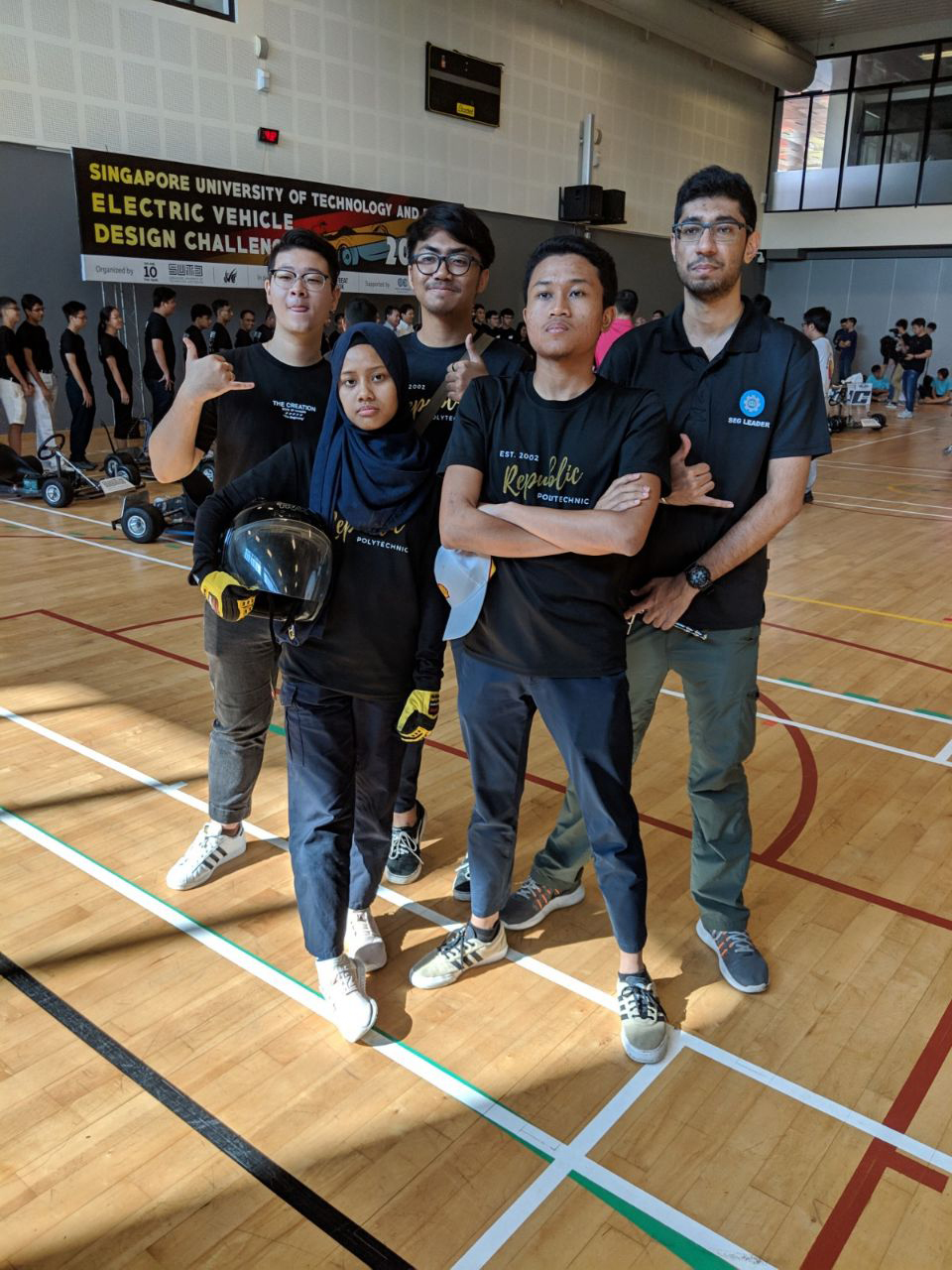 ABOVE AND BEYOND: Nur Amirah with her team members. While they may have different opinions, this team used facts to solve disagreements. (PHOTO: Courtesy of Chang Wan Lin)

RP team makes its debut at SUTD’s Electric Vehicle Design Competition with a female driver at the wheel.

ABOVE AND BEYOND: Nur Amirah with her team members. While they may have different opinions, this team used facts to solve disagreements. (PHOTO: Courtesy of Chang Wan Lin)

Growing up, Engineering Systems and Management student Nur Amirah Binte Shafie was fascinated with speed. She would drive a go-kart during annual family trips to Indonesia’s Batam and Malaysia’s Malacca, and was also fascinated by how go-karts work.

So when the opportunity came to take part in an Electric Vehicle Design Competition organised by Singapore University of Technology and Design, Nur Amirah jumped at the chance.

In May, the 18-year-old was part of a team of seven RP students who took part in the competition. Teams had to build their own electric vehicles before they could race at the time trials at Heartbeat@Bedok.

“I’ve always driven something that was already made, but seeing it from the actual skeleton base with no circuits or anything, then finally something that I could move, it was phenomenal,” said Nur Amirah. “I knew how things worked, I knew which part was wrong if ever something failed. It was a sense of accomplishment.”

“For me it felt normal,” she said. “What was more tense was when the judges would come up to me for being the only female driver. I would keep on pressing full speed and they would commend me saying that I had the skills which made me really happy.”

The RP team had to navigate several speed bumps on its journey to the starting line. The team used 3D printing to make modifications to their go-kart so that it would suit Nur Amirah’s height. “Even the judges and people from other schools commended our modifications. It was really one of a kind,” A day before the race, the team’s go-kart engine failed to start. They discovered the problem was with a faulty motherboard and eventually found a replacement.

Even though the team finished the competition empty-handed, Nur Amirah felt the months spent preparing for the competition was a valuable experience as it forced her out of her comfort zone. The support from her teammates was also vital. “We actually worked really well with each other and I’m glad that I was able to take part in this with them,” she said.