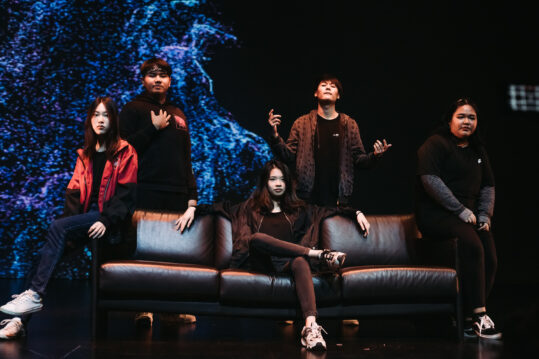 Rhapsody’s ‘Strictly A Capella’ showcase is among the many performances by various IGs that will be going online for this year’s Reflections Arts Festival.

This year, RP’s annual Reflections Arts Festival will be hosted online on YouTube, from Oct 19 to Nov 6. The festival features showcases from various RP Interest Groups (IGs), as well as other programmes, workshops, and even film screenings from other arts groups.

In celebration of local culture, the theme of this year’s festival is ‘Global Local’.

“‘Global Local’ is about how we view traditions, culture, and the arts around the world, and how the arts in Singapore affects or influences the global community,” explained Miss Nurzarifah Azli, 28, from The Republic Cultural Centre (TRCC), who is in charge of this year’s festival.

The shift from live performances to an online platform did not come without its own set of challenges, such as a short amount of time for filming.

“We filmed every day for almost a month. It was like an entire rehearsal every single day from 9am to 6pm. It’s been very tiring for all of us,” shared Miss Nurzarifah. She explained that they worked with a small organising team, and only began rehearsals in September.

She added that there were numerous safe distancing measures the filming teams had to adhere to while producing the videos, including only allowing five people on stage at a time. Students from the School of Technology for the Arts helped with the filming process, as well as the video editing.

The IGs were shortlisted to participate in the festival based on how feasible it was for their members to practice from home, and what type of performances would look best on video.

RP’s A Capella IG, Rhapsody, had members practice their parts from home, and then split into different groups for their showcase. In line with the ‘Global Local’ theme, their members are performing local songs in Singapore’s different languages.

Cassie Phee Yu Xuan, 20, a third-year Human Resource Management with Psychology student, explained that her team used a 360-degree camera that hung from the ceiling to film. This gave an interesting take on their performance, which included covers of Disco Hues songs, as an ode to the popular local band.

“I hope what people can take away is that no matter the situation, especially with Covid-19 this year, passionate music is always going to reach you somehow,” Cassie said. “I hope the audience can feel the passion we have and the amount of talent that not only RP has, but local talent has as well.”

RP’s Jammerz Arena, Replug, Chinese Ensemble, String Ensemble, and Operation Theatre will also have their own showcases. Other IGs under the RP CREATE Club will also perform for the “Reflections Closing Bash: Global Local” segment to end off the festival.

Student producer Muhammad Firdaus bin Bani, 19, a second-year Mass Communication student, counts the ‘Closing Bash’ segment as one of his highlights for this year’s festival.

“The performances are very dynamic. We incorporated different traditions and different genres of ideas, like from Dharma Endari and Style Groovaz Crew,” he said, “They’re all performing in the same item, so it’s very interesting.”

Other arts performers, such as the Jazz Association of Singapore, will also have all their showcases uploaded to TRCC’s YouTube channel throughout the festival. The full festival schedule can be found on https://www.rp.edu.sg/reflections/festival-schedule.