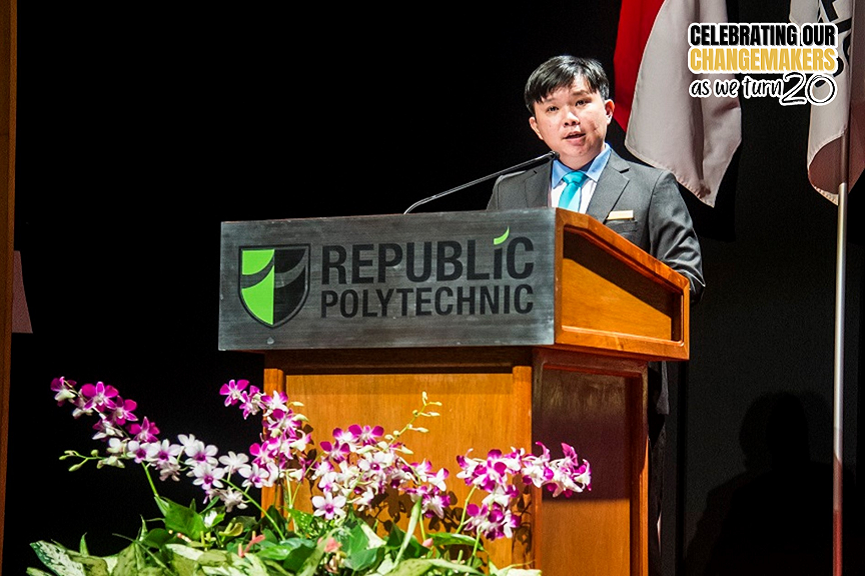 The School of Management and Communication has been through a series of changes over the years. One man has witnessed this transformation - Mr Sim Choon Hou.

BY EMELIA TANG AN QIAN

Founded in the year 2002, the youngest polytechnic in Singapore, Republic Polytechnic (RP) has gone through multiple changes. One of it involves the School of Management and Communication (SMC), which has in fact gone through an evolution.

Mr Sim Choon Hou, the director of the Academy for Continuing Education (ACE), has journeyed with SMC throughout this time having spent 18 years at the school.

In fact, he himself has gone through an evolution of his own.

This unification of the two centres was not easy. Not only was there a need to change the system, but there was a need for clear communication for the staff of both CCC and CIE.

When the merger happened, Mr Sim was the Assistant Director of Academic for CIE. His role required him to help implement the common processes across the two centres without overwhelming the staff.

It was definitely not easy as both CCC and CIE had different styles. Mr Sim explained that while CIE was more “more structured in processes”, CCC was “more relational when handling work related issues”.

It also helped that both centres had one common goal in mind. As Mr Sim stated, “The focus was on the common objective which is to ensure students have the best learning experience they can have.”

The merger was only the start as CEC would later be known as SMC.

To become a school in RP, CEC had to meet the criteria set by MOE, which is to have three full-time diploma programmes. This was met as CEC offered four Full-time Diplomas, one part-time Diploma, one Specialist Diploma and one Diploma-plus Certificate.

According to the proposal submitted by Mr Warren Wang, the Director of CEC at that time, there was a strong need to form a sense of identity. By renaming CEC to SMC would help remove some confusion among the public.

Finally, the task required positioning CEC as SMC, a school in RP that aims to prepare their students to “work in an increasingly complex operating environment for businesses and organisations.”

This was achieved through a “multi-disciplinary approach combining technology, business, communication and social sciences in the development of its curriculum.”

Though it seemed like a long haul at that time, Mr Sim emphasised that the management team “dared to dream, do new things and were passionate enough to bring the best out of our students.”

The journey was a memorable one for Mr Sim.

In fact, throughout this journey of his, there were many achievements that he was proud of.

The first would be leading several teams of non-business students to participate in business-related competitions.

As he recalled, “I still remember mentoring my first two teams for Business Competitions. The students believed in themselves and were willing to work hard.”

Despite the students being non-business students, RP still managed to emerge victorious as champions and in third place in the competitions.

Another achievement Mr Sim remembers is the creation of the first Entrepreneurship Education Programme for secondary school students which went on for more than10 years.

From bidding for the use of the foyer space at NLB at Bugis, to allowing RP a chance to operate a pushcart business in a real-life environment, Mr Sim had several memories in his journey in building the school.

In his time at SMC, Mr Sim said he has learnt many lessons.

He added that it is important that staff “seize every opportunity that is given” to them, and always “remember the difference that you are making towards the students’ lives.”

As for the students he emphasised the importance of building up their portfolio in RP to secure a good spot in universities and their future workplaces.

He said: “Whatever stories you want to pen here solely rests with you. Your lecturers and mentors will always be here to support you but remember the pen is in your hand and you can choose what you want to write for your future.”