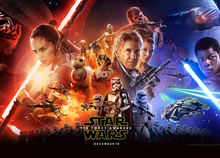 Five years ago, I would not have believed you if you had told me there would be a seventh Star Wars film. This is because they should have ended with Darth Vader’s death in Episode VI. But since Disney acquired the franchise in 2012, they have promised fans a new trilogy. The Force Awakens being the kick-starter to the trilogy has garnered mostly positive reception and an estimated box office total of USD890.3 million worldwide. I however, am not sold. Being one who prefers Star Trek, I was intrigued to see J.J. Abrams (director of the past two Star Trek movies), work on the adversary. This is my take.

While the casting was good, I felt the actors were underutilized. There could have been more emotional scenes to fully showcase the talents of actors like Adam Driver who played Kylo Ren. Instead, the filmmakers took the safe route and played the “action card” instead which was entertaining to the vast audiences. But, the film would have added depth if it had more emotional scenes other than its climax.

On the other hand, not much was explained about the new characters’ backgrounds. Perhaps, they will be explored in the next two installments of the trilogy. We will have to wait and see. But, I’m not holding my breath.

The script was, to me, the worst aspect of the film. Mostly everything the characters said to each other felt very blunt. The objectives were said very simply and plainly as if there were no subtext at all. Regardless of Disney’s purchase of Lucasfilm, I was not expecting it to affect the franchise or movie at all. However, as I continued listening to the dialogue, I could not help but feel like I was watching another teen Disney show with a tinge of Twilight.

The Dark Side felt like a pushover instead of a force to be reckoned with. It did not feel dark enough but just another front.

Despite not being a “Warsie” (a die-hard Star Wars fan), I have to admit that this has to be one of the most beautiful cinematography I have seen. The shots were amazing and with the mixture of the CGI, the film looked visually pleasing to the eyes without going too over-the-top – a common criticism of such sci-fi flicks.

Having watched the other six other Star Wars films, I noticed that they have also kept the classic transitions that fans of the franchise are familiar with.

One thing that the prequels were notorious for was the overuse of CGI. Comparing with the Star Trek movies, they were indeed overwhelming. However, The Force Awakens had a good balance and was visually easy look at. Planets looked robust with each having a very different atmosphere and environment giving audiences an authentic experience.

The music complimented the scenes very well too. Be it a scene with a build up and a lot of tension, a lightsaber duel or even a spaceship battle, every track fits perfectly with each scene.

I did not love it. I rolled my eyes along with the credits and left the theatre perplexed by the amount of hype and praise for the film. Being a Trekkie aside, I felt that the Force Awakens is an average film, at best. It had a good plot and cinematography. But, that is not enough to compensate for the poor dialogue and lack of menace in the dark side. As the most talked about film of the moment, it is worth watching. But, don’t expect too much out of it.

For a Warsie’s take on Star Wars: The Force Awakens, visit: https://www.republicanpost.sg/star-wars-the-force-awakens-review-a-warsies-take/