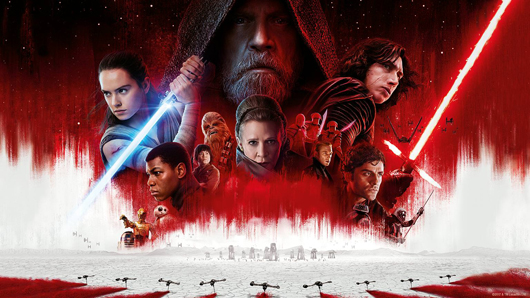 Star Wars is unquestionably one of the longest running movie series with an expected 12 sequels. It premiered its first episode A New Hope in the 1970s, and now they have already produced the eighth episode The Last Jedi.

With the amount of support the franchise has gained, the eighth episode of Star Wars was one of the most anticipated films of 2017, according to polls done by Rotten Tomatoes and Fandango.

This film, directed by Rian Johnson however, did not do as well as it had anticipated. Many fans were disappointed with the story line and the direction the series had taken. Personally, I thought the movie was a little overhyped and the teasers were a little over-promising. Nonetheless, it was still a great film.

This episode continues the story of Rey and her discovery of the exiled Jedi Master Luke Skywalker, along with the story of the war between General Leia Organa’s Resistance and the First Order.

Following the death of Carrie Fisher, who played General Leia in Star Wars, the eighth episode marks her last appearance in the series. General Leia Organa, now widowed by the murder of Han Solo at the hands of their own son Ben Solo, alias Kylo Ren, evacuate their main base as a First Order fleet reaches them. The episode then goes on to show the battle between the Resistance and the First Order as Luke Skywalker battles Kylo Ren for time to evacuate the remaining Resistance fighters aboard the Falcon.

Unlike the previous episodes, The Last Jedi managed to surprise its audience with its plot and the appearance of many characters from the earlier episodes, mainly Yoda who made an unexpected return as a Force ghost. Fans were also taken aback when Kylo Ren decided to save Rey and kill his master, Supreme Leader Snok. Following the suspicions of who Rey’s parents were, “there were nobody”, Kylo tells her that they were “filthy junk traders who sold her off for drinking money”. The reveal made the film even more intriguing as it sends the message that a “nobody” can save the universe, not just chosen ones.

The unexpected plot and introduction of new events had the reviews divided. The lack of backstory and illogical turn of events sparked many controversies as fans claim that Rian Johnson had totally shattered the previous sequel The Force Awakens directed by J.J. Abrams. I had to agree on this one because this film at some point made me feel as if I was watching Star Trek and I was not able to fully connect the two episodes together.

However, it is undeniable that the episode’s set piece battles are some of the most impressive in a Star Wars film, the film was so visually stunning that it elevated the starfighter battles that I have always been unsatisfied with in the previous sequels.

If the director had given the previous characters more of a backstory and not just kill them off, it would have made the film more logical and comprehensive.

If you’re a non-Star Wars fan and are still contemplating if you should invest the two hours into watching the film, you really should. Casting the confusing plot aside, the mind-blowing plot twists and thematic consistency, alongside its amazing cinematography will keep you on the edge of your seat.