Staying on tempo: The drummer with unwavering determination 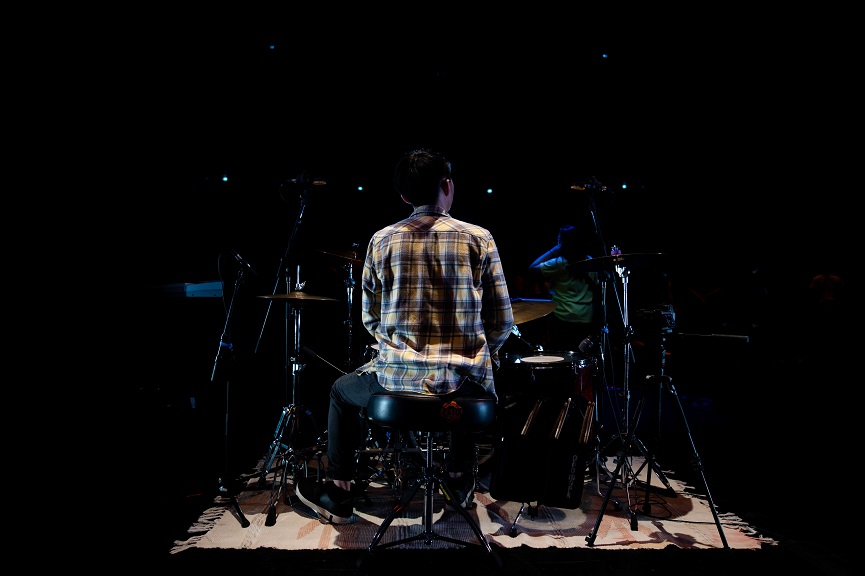 The world around him may be playing a different song, but STA graduate Joshua Then stays firm in his passion to pursue his dream career in the music industry.

It was serendipitous that Joshua Then Shao Xiang took part in a school drum competition when he was in Secondary 2. Before, he hadn’t taken music seriously. But, winning that competition ignited a spark of passion for music in him.

Joshua, 21, who graduated from Republic Polytechnic’s Diploma in Sonic Arts programme in April, said the competition made him think seriously about music as a future career.

This was despite naysayers advising him against joining the local music industry, as career prospects were neither rosy nor lucrative. Fortunately for Joshua, his parents, especially his Dad, were extremely supportive.

“My Dad always reminds me to pick a course that I enjoy. He did research and showed me that the music industry isn’t entirely gloomy in Singapore,” said Joshua.

Though his mom had reservations about his career choice initially, she noticed his love for music and sound and is today, his strongest supporter.

Joshua said his friends from church were his pillars of support as well. They would help out with his YouTube channel, sometimes collaborating with him, lending him their equipment for his music gigs. His seniors in church do not hesitate to point out his mistakes when he plays music and this helps him to improve his skills.

Joshua’s love for music blossomed in RP when he joined Jammerz Arena, an Interest Group, as a Drummer and Bassist, Assistant Music Director, Sound Engineer, Video Editor, and Backing Track Creator. Furthermore, being in Jammerz Arena gave him opportunities to go deeper into his understanding of the different song choices, being a mentor to junior bands and creating backing tracks.

However, the creative process is not smooth sailing all the time.

He explained: “Composing music didn’t come too easily for me as there would be days where I would sit at my table staring down on my keyboard, with zero thoughts in my head.”

Despite the hurdles that came his way when composing music, he was determined to pursue this path.

When asked where he gets his musical inspiration for composing, he mentioned names such as Andrew Huang and Kurt Hugo Schneider, two well-known musicians on YouTube.

“They were a huge inspiration for music making as their videos showed how fun music creation can be,” he said.

Things came to a halt during the pandemic, when lessons were conducted online and this was not ideal as hands-on learning experience was preferred in his module.

Nevertheless, his experience in RP has given him opportunities to be exposed to various job scopes in the sound industry he can take on upon graduating. He has his eyes set on becoming a Studio/Live Engineer or sound designer.

During his internship at Gateway Theatre, he worked with new audio equipment brands that he didn’t get to do so in school, such as EAW and Allen & Heath. He also learnt to be more proactive by asking questions when in doubt. He was also involved in editing a song for Singapore Hospice Council’s TikTok page.

Joshua’s efforts and hard work was recognised by the school. He was awarded the RP Scholarship in 2019 and 2020, Director’s Roll of Honor Y1S1 and Y2S1 and Best in Electronic Music in 2019.

These accolades served as motivation for Joshua, who said that it was a trying period when he felt burn out having to strike a balance between his academic studies and his responsibilities at Jammerz Arena.

“However, receiving the scholarships where I also received the monetary awards really motivated me to press on in my studies,” he said.

As a chapter in his life comes to an end upon graduating from RP, he enters a new one with plans and aspirations.

In order to achieve his dream, he aims to do freelancing in the studio/sound engineer industry to find out more about the music scene in Singapore and he hopes to make connections with people along the way. After National Service (NS), he plans to continue freelancing but also take up online courses for sound design.