Stringing to a different tune 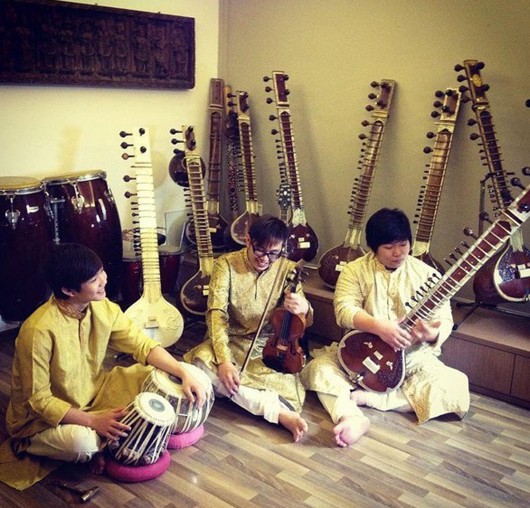 That these young men are talented musicians is interesting but what makes them fascinating is that Govin Tan, Krsna Tan and Dexter Tan all play classical Indian instruments. The trio are members of Flame of the Forest (FOTF) which they started in 2007. Govin plays the tabla, Krsna, the sitar and Dexter plays the violin. Govin, 21 and Krsna, 24 are brothers while Dexter is their cousin. Govin and Dexter were Republic Polytechnic students who graduated with a Diploma in Sonic Arts. The trio has performed in front of VIPs like the Prime Minister and has won several awards for their music.

Republican Post sat down with the boys to ask them about their music and the brothers said their dad was a huge factor in their success. Mr Tan Thiam Teck, 55, said he happened to listen to someone playing the sitar on the radio one morning. “That day I decided that I was going to learn the sitar and more about Indian music from the experts,’’ said Mr Tan. He soon got his young sons to start practicing. Something they remember as being tough as young boys itching to play regular games and sports like other kids.

While other kids got to enjoy their free time after school, Govin and Krsna had to practice every day without fail. Krsna said “I hated sitar and Govin hated tabla. We were forced by our parents to pick up these instruments. Every night our father comes back from work and asks us to play the song. School, home, lunch, practice, dinner, practice, homework. That was our routine every day!’’

They only really started playing video games like DOTA when they entered RP. “So it was very tough in the beginning but as we got better, we began to really enjoy making music,” said Govin.

When Mr Tan realized that the boys could play their individual instruments well he suggested for them to come together as one to create their own music and that is how Flame of the Forest started. “Krsna and I were already playing since young and when my dad realized that Dexter was playing the violin, he told us to give a shot. It created an opportunity for us to share our knowledge in different genres of music which is Indian and Western. The first song that we played together was Journey by Biddu Orchestra. It was a simple yet beautiful piece. When we learned that we were able to gel our music together, we decided to start the band,” said Govin.

Having performed at several shows, the boys have memorable experiences. One of the most unforgettable was when Krsna and Dexter fell asleep while playing. Krsna said “There was once we had back to back performances. One night, I told Dexter “We’ve been doing too much work, the only time we are free is at night. Let’s go out and have fun.” The next morning, after we played, some of the audience came up to us and said, “Oh I feel your music, it was so good. Little did they know that we fell asleep on stage while playing our instruments!”

One of their biggest shows was their performance for the ASEAN summit in India. They had the honour of performing for Prime Minister Lee Hsien Loong. Govin, Krsna and Dexter had done numerous performances for our president, ex-president and ministers. However, performing for PM Lee in India was their first and thus they were excited and nervous as they were representing Singapore.

FOTF have big plans ahead of them. “We plan to go for more recordings, create more songs, write lyrics and give lessons and hopefully do at least one or two concerts every year. We are planning to go with the flow,” said Krsna.