TF SCALE 2022: Ending Off With A Splash Of Culture 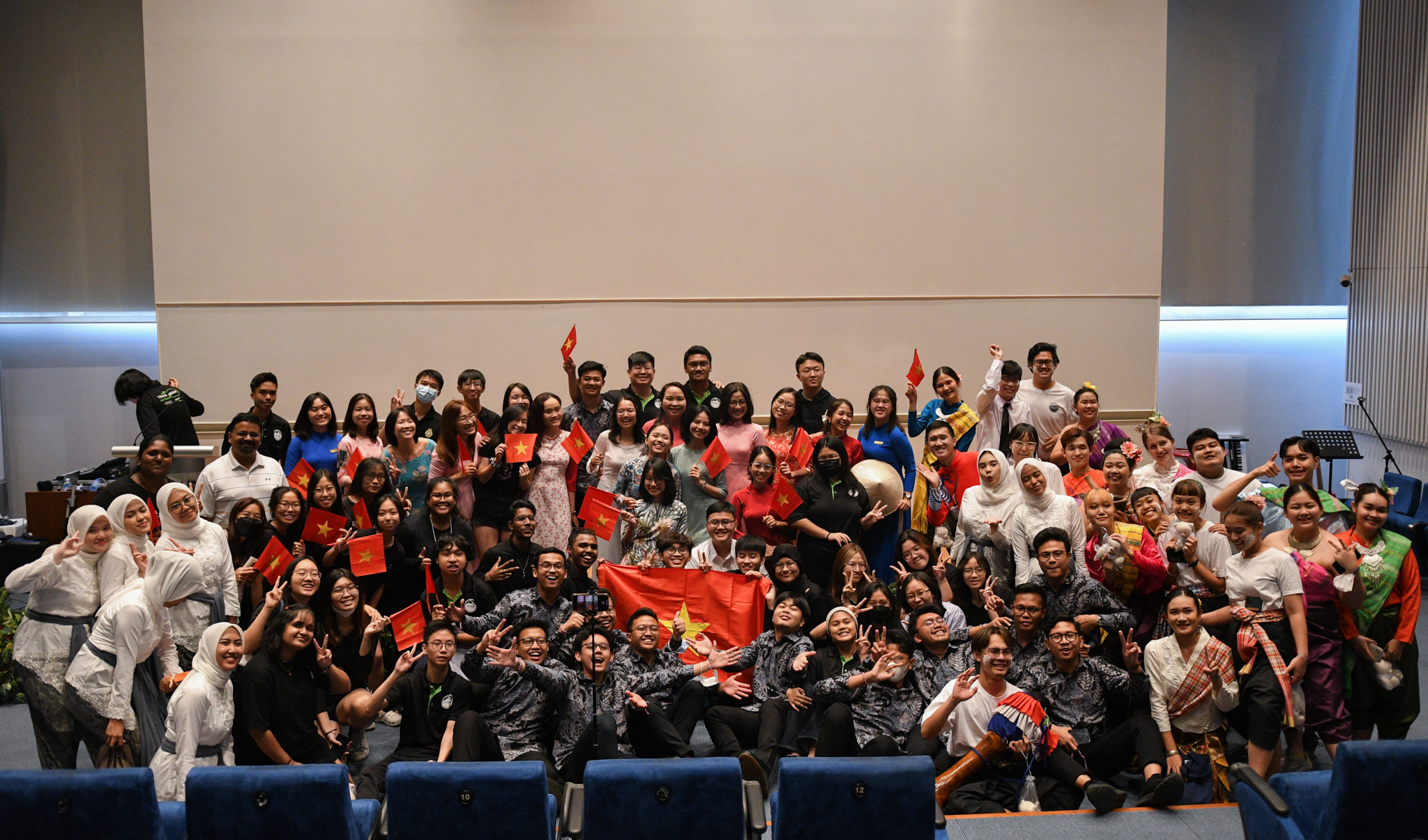 UNISBA, USSH and CU students coming together to take a group photo at the end of the closing ceremony. The new friendships forged were a sight for sore eyes. (PHOTO: Nur Ihshana Shaheen Binte Babajahn)

TF SCALE 2022 ended on a high note as students from Universitas Islam Bandung (UNISBA), University of Social Sciences and Humanities (USSH) and Chulalongkorn University (CU) performed at the closing ceremony.

UNISBA, USSH and CU students coming together to take a group photo at the end of the closing ceremony. The new friendships forged were a sight for sore eyes. (PHOTO: Nur Ihshana Shaheen Binte Babajahn)

Through a series of colourful performances, the closing ceremony on 14 October showcased the vibrant cultures that the students brought to Republic Polytechnic (RP). From the melodious songs to the elegant dances, only one word could describe the ceremony: breathtaking.

Decked out in vibrant and multi-coloured áo dàis (a traditional Vietnamese national garment), students from USSH started off the ceremony with a bang. As some students sang and the others danced, the energy in the room immediately picked up. With the aid of lyrics on screen, the audience got into the mood quickly and started singing along.

Halfway through the performance, the students got offstage and pranced along the aisles the audience was seated. As they walked, they whipped out their Vietnamese flags and waved them in the air with pride. The smiles plastered on their faces spoke volumes about how proud they were to be there to share their culture with everyone – it was a sight to behold.

Soon after, the UNISBA students began their choir performance. They sang two songs titled “Bandung” and “Mojang Priangan”, both of which conveyed their traditional Indonesian culture.  The first song, “Bandung”, is a song that paints a picture of how Bandung is a beautiful city, and how it always feels like home. Subsequently, the song “Mojang Priangan” describes and compliments an attractive Sudanese person.

Their time on stage was filled with so much unity and passion. It was no wonder they were rewarded with a massive round of applause at the end of their performance!

To end it all was a performance by the CU students, in collaboration with students from the School Of Technology for the Arts (STA).

The students started off with an original song that they composed, titled “Amazing Thailand”. The song was about the fond memories that the students had created while they were here, and the everlasting bonds they had forged with the RP students. Furthermore, the performance was done using a combination of traditional Thai and contemporary instruments, which further highlighted the theme of forging new friendships.

Following the self-composed song, both CU and STA students performed a dance to the remixed version of a song titled “See Tình”. The dance was further enriched with unique Thai traditional costumes. From the gorgeous jewellery adorned to the brightly coloured flowers in their hair, the performance was nothing short of visually stimulating.

The ceremony ended with a closing speech by Mr Terence Chong,  Director of RP’s Office of International Relations. He thanked the students, staff and members of the various embassies for enabling the event to be a roaring success. At the end of the day, it was clear that everyone in the room was beaming with joy as the rush of adrenaline from the various performances was kicking in.

The energy that the performances brought to the room was spectacular and the ceremony was not one to forget. As the ceremony ended, both RP and the international students were seen taking pictures with one another, in a bid to capture the beautiful memories they shared over the past two weeks.

“I felt a mixture of emotions as for the past three days, we have put in countless hours of time and effort to practice the dance moves together with our Thai friends to perform it in front of everyone just to make the performance a successful one!” says Lim Yu Xin Erina, a student from the Diploma in Design for User Experience.

Although this marked the end of the trip for the international students, it is definitely the start of their newfound friendships forged in Singapore!