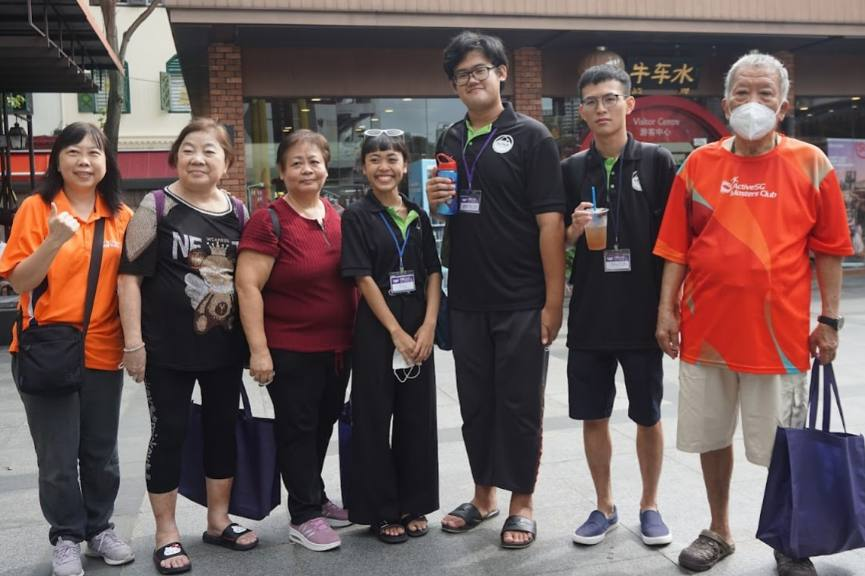 It was no ordinary walk for senior citizens who took part in a special technology-enabled heritage tour designed by Republic Polytechnic students and Chulalongkorn University undergraduates as part of the inbound leg of their Temasek Foundation SCALE VIII (TF SCALE) programme in Singapore.

If you were out and about in Chinatown on Saturday, 8 October, you might be intrigued by the sight of some youths and senior citizens busy scanning QR codes on their mobile phones.

Those youths were students from Chulalongkorn University (CU), who had partnered with their counterparts from Republic Polytechnic’s (RP) School of Technology and The Arts (STA) to take senior citizens out for a heritage tour with a twist.

Instead of the usual walks around popular heritage sites,  STA students created a mobile app that contained fun and unique Chinatown-inspired face filters.

Going on a Learning Journey

The learning journey kicked off at Chinatown in the late morning with over 40 STA and CU students and 15 senior citizens. Starting off with the residential building beside Chinatown Complex, the elderly had to identify buildings that were reflected on a print image. Once correctly identified, the station masters, which included CU and STA students, had to give a brief history of the identified buildings.

As some of the senior citizens did not speak English and were not tech-savvy, the next few stations proved to be a challenge. For majority of the stations, the elderly had to overcome their fear of technology. It was particularly challenging at the second station, since they had to use an App developed by the STA students.

During the activity, the App depicted an image of the mural, with various pictures in the mural numbered from one to five. The station masters would then play music that was related to any of the five pictures, and the elderly had to guess which of the music paired with the picture.

This activity was a tricky one, as the elderly had to navigate the App while trying to match the music and the pictures. Thankfully, with the help of their young friends, the senior citizens were soon having fun using technology and joyously participated in the activity.

Despite these challenges, the second location had the biggest impact on the elderly.  For many of them, filters were something they had never heard about, let alone used. They were astonished at how realistic and detailed the masks were. The wide smiles on their faces reflected how excited they were to be using AR for the first time.

When it was time for a photo-taking session, the elderly and CU students donned the filters and happily snapped photos together. The sight of the fascinated elderly and awestruck CU students was truly one to behold.

After two weeks of activities, students from RP and CU forged a close bond with one another, fostering a memorable yet fulfilling learning experience for all.

“With the help of the Chulalongkorn University students, the project was made even more memorable. Making it one of the best experiences during my SCALE journey,” said Ahmad Afandi Loh Teck Chew, a third-year student from the Diploma in Sonic Arts.

STA students also had the opportunity to apply and develop their technical skills.

“I felt that this is a very enriching and good opportunity for me to bond with the elderly and my friends as well, and also for me to put my photography and videography skills to use,” said Ranen Mok, a second-year student from the Diploma of Media Production and Design.

The students will meet again in March 2023 in Bangkok, Thailand, where they will carry on their TF SCALE journey.