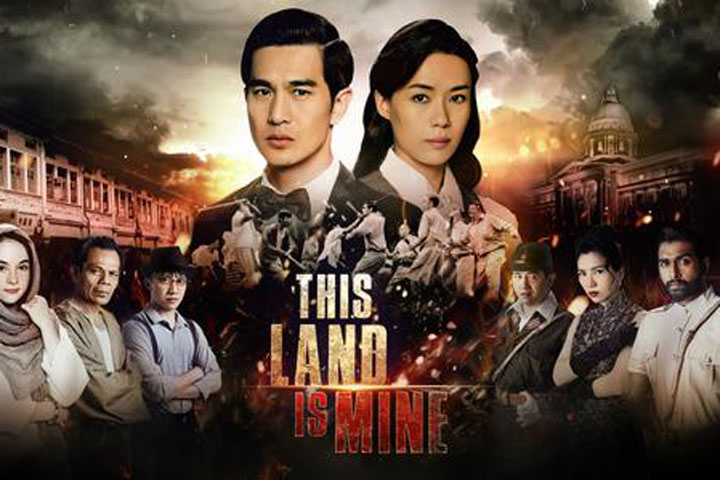 A poster of This Land is Mine series featuring the stars. (Photo: Mediacorp)

In partnership with Mediacorp, four of our Republican Post reporters recently viewed Channel 5’s new period drama, This Land Is Mine. This moving and suspenseful show has inspired four reviews, compiled in this mega-article, and here is what we have to say.

BY FELICITY, ISAIAH, PATRICIA AND RAUSHANA

A poster of This Land is Mine series featuring the stars. (Photo: Mediacorp)

A JOURNEY TO THE PAST

As someone who spends exorbitant amounts on Netflix and Disney+ just to fuel her obsession with shows like Modern Family and Grey’s Anatomy, I never gave a second thought to locally-produced shows. Come This Land is Mine, a period drama on Post-War Singapore that follows the story of a lawyer as he is seen defending public enemy number one. At the time of writing, four of eight episodes were released on MeWatch and, admittedly, I binge-watched all four 45-minute episodes in one sitting.

Being a Post-War drama, This Land is Mine is heavily focused on life after World War II, as the British took over the rule of Singapore again. We get to see the aftermath of the events of the war in Singapore, including racial tensions and scornful attitudes towards the Kempeitai.

Based on the book The Devil’s Circle, the final instalment in The Advocate’s Devil trilogy by former Attorney-General Walter Woon, this story follows two cousins, Dennis and June Chiang.

Dennis (played by Pierre Png) is a lawyer at d’Almeida and d’Almeida. He is forced to defend Nakamura, a Kempeitai torturer (played by Sugie Phua) in court. At a time when things were heated, and people were still hurt from the actions of the Kempeitai, remaining objective towards his client was not the only struggle that Dennis faced during the trial as he had to find the balance between dealing with the public’s anger, and Nakamura’s refusal to talk.

June (played by Rebecca Lim) is a sharp-witted legal clerk at d’Almeida and d’Almeida who hides a dark secret. In the very first scene, which turns out to be a flash-forward, we see June confronting someone. The juxtaposition of her aggression in the scene against her usual disposition signals something much bigger than what is presented to the audience. The flashbacks and PTSD episodes that are triggered reveal bits and pieces of June’s experience, and the air of mystery draws you into the story slowly, but surely.

Another enthralling plotline that brings the characters together is the story of Mariam, which is a nod to Maria Hertogh. Elly Gaskell plays Mariam, a British girl adopted by Ahmad (played by Joe Jasmi) and his late wife Siti after her parents had passed on during the war. Her aunt Emma (played by Shona Benson) has been searching for her since the end of the war and, after finding her, is adamant about bringing her home to England. Mariam, on the other hand, is firm in wanting to stay with her adoptive family. The insistence from both parties on Mariam’s custodianship makes it incredibly exhilarating for us to see how this story unfolds. Whether history will repeat itself in this series, or things will take a shocking turn, we will have to stay tuned to find out.

Something interesting to note is that although the show is presented mainly in English, different languages are spoken by the main characters. The characters are a mix of the different races in Singapore, and it is a unique experience to hear the different mother tongues spoken in one show. Despite the show taking place in the ’40s, it emphasises the fact that Singapore is a melting pot of cultures. Locally produced dramas focus on promoting racial and religious harmony, as well as celebrating the country’s culture and heritage, This Land is Mine really brings out the importance of racial unity.

With different storylines that all twist together beautifully, This Land is Mine is riveting and deliciously intriguing. It will keep you on the edge of your seat and leave you yearning for the next episode. It is definitely worth a watch, especially if you are a history junkie!

This Land Is Mine: An Intriguing Take on a Post-War Singapore

This Land Is Mine is a show adaptation of Walter Woon’s novel The Devil’s Circle, the third instalment in a series of post-war Singapore novels by the Singaporean writer and former Attorney General.

Set in 1946, between the end of Japan’s occupation in Singapore and the restoration of society under the British Military Administration, the story depicts a devastated nation desperate for a way out of the rubbles.

The main focus is the loss of identity, a recurring theme involving the tale’s two main characters, lawyer Dennis Chiang (played by Pierre Png) and his cousin June Chiang (played by Rebecca Lim), a legal clerk.

Dennis returns to post-war Singapore to face his first of many challenges, the defence of a former officer of the Japanese Military Police accused of wartime crimes.

June has a handful of adversities too. Fighting gender and societal stereotypes, she is forced to work as a legal clerk and secretly dreams of becoming a lawyer, just like her cousin.

With a diverse supporting cast of characters, each with their own struggles, complete this study of a particularly trying time in Singapore’s history.

Mariam (played by Elly Gaskell), for example, is a young British girl living in a Malay kampong. Refusing to follow her aunt back home to England, she struggles to convince her that Singapore is where she truly wants to stay.

The story quickly unfurls in the first four episodes, as details of the characters’ unique situation come to light. Their goal though is similar: to prosper in a once broken and divided Singapore.

If you enjoy a post-war show with intriguing characters and splendid acting, I highly recommend this show. Besides, it also gives you a deeper appreciation for our pioneers, and all that they sacrificed and suffered through, for us to now have and enjoy this beautiful and prospering nation.

Catch This Land Is Mine, now available on MeWatch.

Whose Land Is This

After 56 years of independence as a country, time may have eroded our memories of Singapore’s beginnings the way time tends to do. I, for one, have often thought about what it was like for our forefathers to build our nation to the way it is now, let alone to go through the war, the Japanese Occupation, and the struggle of identity and home in such uncertain times. This Land Is Mine gives a fresh take on post-war, pre-independence Singapore and the lives of different individuals facing the same situation with different perspectives.

Cousins Dennis (Pierre Png) and June (Rebecca Lim) work at a law firm where Dennis is representing defence for a Kempeitai (Japanese military police officer), a war criminal who committed many atrocities during the Japanese Occupation. He faces backlash from his aunt as well as the general public, in whose minds the hardships they suffered were still fresh. June on the other hand, struggles with her past experience in the war as well as her future, where she wants to be a lawyer but is restricted by societal norms of the time and reduced to finding a suitable husband whom she can marry.

Other than the cousins, there is actually a varied cast of characters who draw you in and showcase different aspects of finding identity while staying true to oneself. Such examples are Mariam (Elly Gaskell), who is an adopted British girl who grew up in Singapore, and Officer Habibullah (Shabir), a war hero who lost his arm in the war. There are other complex and dimensional characters who will pique your interest and steal your heart.

This Land Is Mine prompts the complex question of what our Singaporean identity is, among others, as well as highlights our history as one people building a nation together. A timely premiere on National Day on Channel 5, it is truly a good watch which will leave you pondering and reflecting on things which you may not have previously.

The first eight of 15 episodes of This Land Is Mine are available on demand on meWATCH.

Learn About Singapore’s History Through A Great Story

Based on Walter Woon’s novel The Devil’s Circle, This Land Is Mine reveals the adversities that Singaporeans faced post Japanese Occupation, before Singapore gained independence. Pierre Png and Rebecca Lim play cousins who work together at a law firm called d’Almeida & d’Almeida. Each of the cousins have their unique set of personal challenges and agenda. Nevertheless, both of them are selfless, and determined to help anyone they can.

Dennis, played by Pierre Png, is an intense but righteous individual. When faced with tough decisions, he still managed to pull through and carry out his duties as a lawyer, nephew and cousin. He was forced to decide whether or not to defend Nakamura, a Japanese Kempeitai (military police force) torturer, knowing the atrocities that the Japanese inflicted upon Singaporeans. Nonetheless, he took the job. When an article mentioned Dennis defending a war criminal, the public showed distaste towards him and his family. Png’s portrayal of a man whose dedication to his work and staying true to his responsibilities no matter what was remarkable.

June, played by Rebecca Lim, is a warm and kind yet strong and intelligent woman. She experienced the terrors of the Japanese torture firsthand. Despite the trauma this caused her, she was still determined to help as many people as possible in any way she could. June aspired to study law and become a lawyer but faced challenges as an Asian female in 1940s Singapore. Lim’s captivating portrayal of June encouraging females in Singapore to work hard for their dreams was inspiring.

Though fictional, watching This Land Is Mine is an interesting way to learn more about Singapore’s history while being thoroughly entertained by the drama.

The 15-episode series is premiered on Channel 5 at 9:30 p.m, on National Day and is now available on-demand on MeWATCH.

Mediacorp MeWatch This Land is Mine