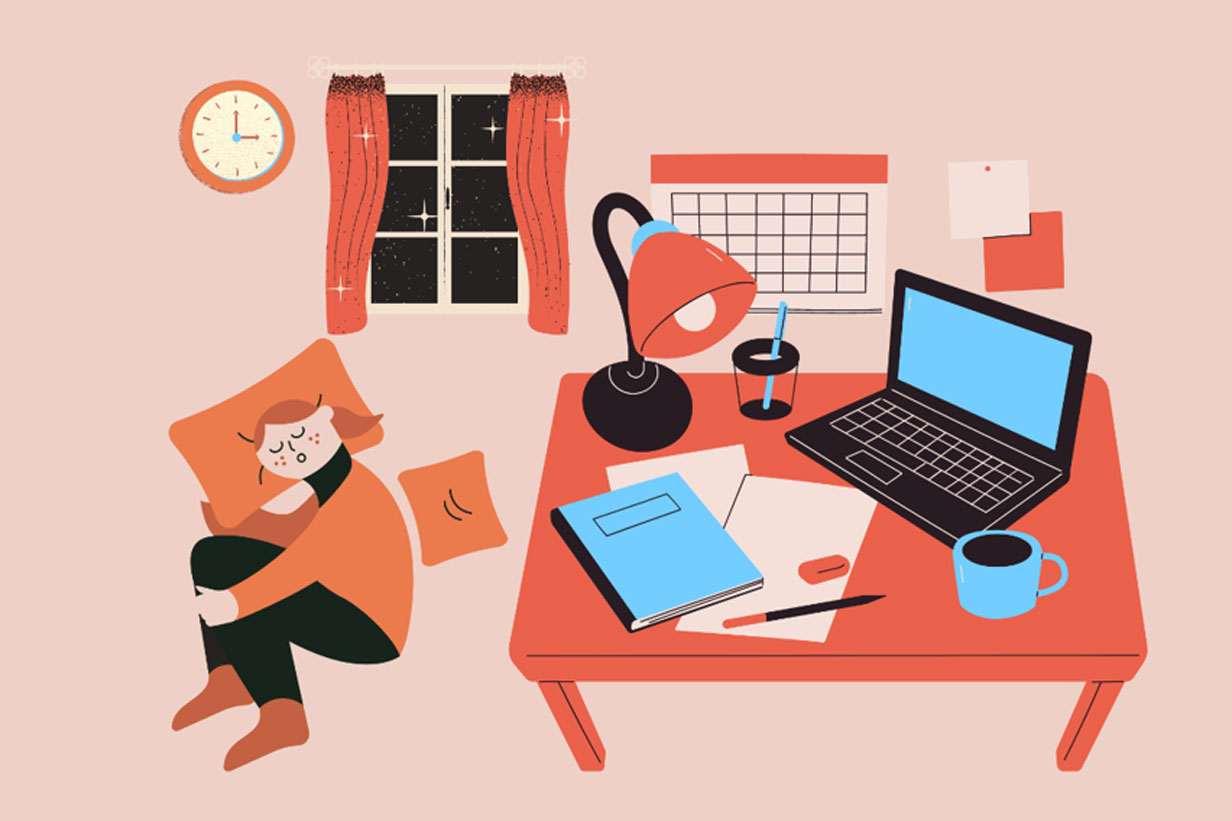 Illustration of a girl sleeping beside a study table.

Productivity culture is the need to constantly be seen doing something to demonstrate how productive a person is.

Illustration of a girl sleeping beside a study table.

Working hard at anything I do has been imbibed in me from a young age – starting with my school work, which I took very seriously and gave my 100 per cent.

However, as technology takes over our lives especially with the rising prevalence of social media, I am left wondering if we are really productive or if social media is forcing us into a toxic productivity culture.

Productivity culture is the need to constantly be seen doing something to demonstrate how productive a person is.

Personally, I have gone into such a mode where I overwork as I feel guilty when I am resting and not doing anything. To me, productivity culture is flawed and mentally draining.

I feel unnecessary pressure as it creates expectations of having to show one and all that I am perpetually busy. All my friends are always busy doing something and they post their multi-tasking ‘busyness’ on social media all the time.

I was also caught in this trap and it was during my Secondary 4 days when I became obsessed with studying – and I mean that. While it was a period where all students study intensely for the looming O-level examinations, I went overboard.

I used to take my study notes everywhere with me – be it a family dinner or an outing with cousins. I used to feel guilty when I was not studying and used to beat myself up for not doing something productive.

I was so obsessed that I would spend every waking hour studying, often even missing out on sleep and even skipping meals.

I would spend long hours locked up in my room and even stopped interacting with my family members. I had a to-do list every day and would get angry with myself if I could not complete every single task on the list.

At that point, in my mind, that was being productive and that was productivity culture — where you are constantly demonstrating that you are achieving or accomplishing something 24/7.

I often see posts on Instagram of my friends studying in the wee hours of the morning or a 5am wake-up TikTok video. Others post on Facebook and show overworking to be something that is even glamorous. I often end up comparing myself to them and end up feeling lousy.

Often, after a long day at school I lie around lazing in bed scrolling through Instagram. Suddenly I see my friends posting their study table set-up, all set to hit the books.

I will stare at the Instastory for a few minutes and the only thought that will go through my head is: “Why am I still lying here when I can be doing something towards achieving my goal?”

Now I realise how irrational and toxic those thoughts were. Why was I comparing myself to someone else’s productivity? But the reality is, that is the impact of social media on young people like me.

It is such an easy platform for people to see what others are doing and though it may be an innocent post, I feel it often evokes unhealthy feelings of comparison, envy and inferiority.

PUSHING OURSELVES TO UNHEALTHY LIMITS

I feel that this toxic productivity culture is increasingly prevalent among Singaporeans. Our mentality and mindset have been shaped into thinking: “If you work hard now, you will be successful in the future.”

While this can be motivating, the way it is portrayed on social media has the opposite effect. People are sacrificing their mental and physical health to reach a certain goal which is their definition of success.

Psychologists say that our sense of value fluctuates widely depending on how much we were able to do that day. This means that as human beings, how much we get done during the day is a measure of our worth.

Do not get me wrong. There is nothing wrong with wanting to work hard but the way productivity culture is promoted on social media is harmful. It creates an unsustainable habit as we feel the need to push ourselves to our maximum capacity and ignore our mental and physical well-being to reach a certain goal.

We need to start realising that hard work may be important, but to achieve our goals, we do not have to push ourselves to unhealthy or unrealistic limits. This is something I have been telling myself every day after my Secondary 4 experience. It is not easy but I am trying.

I am reminded of a headline from Yahoo! Finance UK that said: “The problem with productivity culture is that we aren’t robots”!

I certainly do not want to become a robot!

This commentary was first published in AsiaOne as part of a collaboration between the digital news website and Republic Polytechnic’s School of Management & Communication.