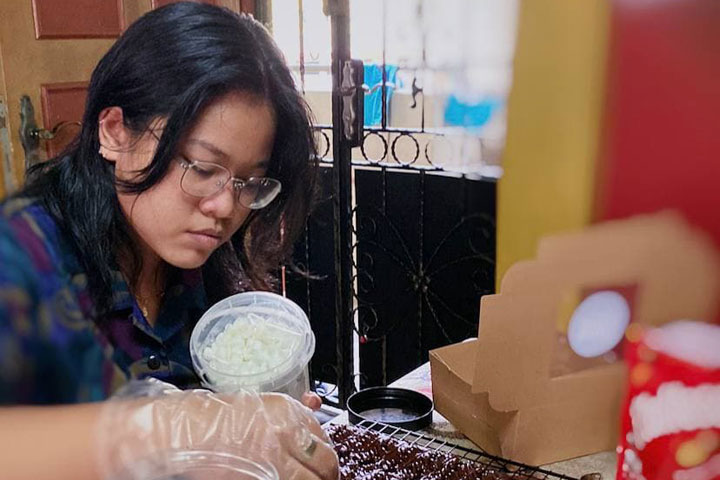 Diploma in Media Production and Design (DMPD) student Sartikah Ardilaa’s dream to start a home-based bakery came true in the midst of the pandemic.

Growing up in a family that runs a wedding catering business sowed the seeds of entrepreneurship in Sartikah Ardilaa, a third-year Diploma in Media Production and Design (DMPD) student.

Most members in the family are involved in the business, including Sartikah, who works alongside her mum as “resident bakers” in charge of baking desserts for wedding guests. Her passion for baking started from there.

While business was profitable pre-pandemic, Covid-19 saw postponement of weddings and consequently, wedding catering businesses such as Sartikah’s family business were hard hit.

It was under such circumstances that Sartikah decided to start her home bakery business then and there.

As the resident baker in her family business, it was natural that Sartikah’s idea was to start a bakery. Drawing on her digital media expertise, she decided that Sartzy Tartsy (@SartzyTartsy) will use Instagram as a platform to sell her home-baked cakes and pastries.

According to Sartikah,  the name Sartzy Tartsy was a word play on the phrase Artsy Fartsy, which means an aspiring artist or being sophisticated.

She added her name into the first word of the phrase to signify that she’s the founder of Sartzy Tartsy.  Tartsy was chosen because she first started out the business by selling tarts such as Nutella Tarts and Fruit Tarts.

“So, the name Sartzy Tartsy actually means a whole lot to me as it reminds me of where I started,” she explained.

Today, customers not only can savour her popular tarts, Sartikah also added a variety of pastries on the menu. Her best sellers are the fudgy brownies which are almost always sold out. Customers, especially chocolate lovers, like it because it is not overwhelmingly sweet but yet comes with a premium, rich chocolate taste. These best sellers are being sold at the price range of $30 to $40 with a wide variety of toppings to choose from.

Although she enjoys brisk business now, Sartikah said it was not easy in the beginning.

Finance was an issue as she did not have enough savings to cover the start-up cost of $1,500. The money went to buying baking ingredients and industry-standard baking equipment such as a good oven, a premium quality mixer as well as other tools including spatula, palette knife, piping bag and more.

Sartikah added: “The cheaper options tend to get faulty easily and I need to make orders every week, so I might as well invest in a quality bakeware.”

However, one of the ways she managed to overcome this difficulty was by seeking help from her mother who would share some ingredients with her as she is also a baker herself. Other than that, Sartikah also ensures that she sets aside funds specifically for her business from her daily expenses.

Sartikah also shared that at the start, she did not have a sticker of her logo yet for the packaging and it was originally handwritten on every box of her orders.

Furthermore, she also had to juggle her responsibilities as a student and other commitments including her Interest Group (IG), Malay Dance and her part-time jobs as a barista at Starbucks and a delivery food rider for Foodpanda.

Fortunately, she managed to overcome all these challenges through sheer grit and determination to make it work.

Sartikah enjoys being her own boss.

“I don’t have to wake up early and report to someone and that’s the best thing ever,” she said gleefully.

Sartikah also mentioned that being her own boss helped in terms of her productivity. This is because she knows when she functions best, and this in turn plays a huge role in determining the quality of her pastries.

Moreover, she also tends to put her all into her work especially since baking is something that she enjoys doing.This includes how she is always more than happy to fulfil a customer’s order even if it takes an entire night to complete.

Being a media student also meant that she knows how to promote and market her products on Instagram. She could be as creative as she wants to be in designing her Instagram posts.

BAKE IT ‘TIL YOU MAKE IT

What used to give her great satisfaction in baking is when she sees the happy faces of the bride and groom when they receive the wedding cakes. Nowadays, Sartikah experiences the same joy when she gets positive feedback from customers on Instagram or in person.

“I find it interesting how a piece of cake can mean so much to someone during that special day in their lives,” Sartikah added as she was emphasising on the reactions of her customers.

When asked about her future plans, Sartikah said she wishes to open a physical cafe.

She hopes to involve her mother – whom she frequently bakes with; and her brother – who is a barista – in her next business venture.

Sartikah’s entrepreneurial journey story is a lesson in making the impossible possible, as long as you set your mind to it.

At the moment, Sartikah has been attending to many orders for her brownies and even accepted customised orders for events. However, she does not plan to stop here. In fact, she is planning to “bake it until she makes it” (to reach her aspirations).

When asked for advice for aspiring student entrepreneurs, Sartikah said: “Never be afraid to try and even if you don’t succeed the first time, don’t give up because if it’s something that you love, it should keep you going.”