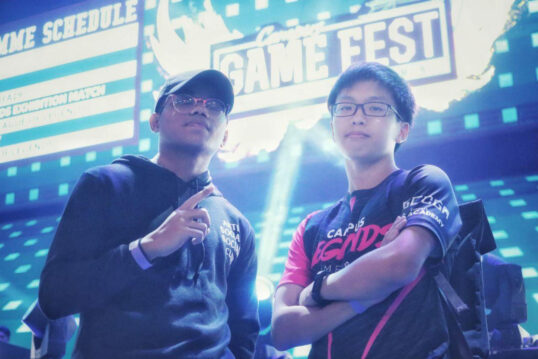 GAME ON: Favian Cheong (right) with his teammate from former competitions at the 2019 Campus Game Fest (PHOTO BY: Cheong Kai Zhe Favian)

Serious gamer Favian Cheong shares how he got hooked by the competitive nature of eSports.

GAME ON: Favian Cheong (right) with his teammate from former competitions at the 2019 Campus Game Fest (PHOTO BY: Cheong Kai Zhe Favian)

Can one make a career from playing electronic sports, better known as eSports?

You can, if you are so good as to win competitions. Just ask Cheong Kai Zhe Favian, a serious gamer who devotes three hours a day to hone his gaming skills and is good enough to qualify for regional competitions.

Favian not only excelled in eSports, he is also this year’s top graduate from the School of Infocomm (SOI)’s Digital Design and Development programme.

Electronic sports or eSports, is a form of sport competition using video games. Due to its rising popularity, eSports has been categorised as a medal event in the 2019 SEA Games, according to the Esportsobserver.

Favian’s interest in online gaming started a few years ago when a friend introduced him to “League of Legends”, one of the most popular Multiplayer Online Battle Arena (MOBA) games today.

He decided to play competitively and set a target to represent Singapore in competitions. What keeps him motivated is the saying that “It isn’t wrong to be weak but staying weak is”.

The lure of eSports

While the competitive nature of eSports has led some to draw parallels between eSports and physical sports, Favian said there are clear distinctions between these two.

For instance, while traditional sports require physical training programmes at sports facilities to help improve the athletes’ skills and fitness, eSports use “scrims” to improve the gamers’ in-game skills.

Scrims are online practice gaming matches between several competitive players or teams in an unranked environment where there are no benefits of winning and no disadvantages of losing. The term is short for “scrimmage”, inspired by pre-season, warm-up or preparation professional matches between competing teams outside of tournaments.The sole purpose of scrims is to improve the players’ skills, and these matches are usually done in a “Best of Three” format. An upside is that the players can remain at home to participate in these training games.

One of the most famous local tournaments, Campus Legends is held annually in Singapore. Students from universities, polytechnics, ITEs and secondary schools would come together to compete. Favian took part in Campus Legends in 2019.

“As it was the first time that I got to represent my school, everymatch was nerve-wracking as it meant that our school’s reputation was on the line. The RP team managed to pass three stages of eliminations to reach the top eight schools, but we failed to reach the semi-finals,” he recalled. “Despite this, it was a great experience playing at the Singapore Indoor Stadium. It was an honour to represent RP in Campus Legends.”

Favian believes that the future of eSports is bright. “ESports on multiple platforms like console, PC and mobile has been on the rise lately and more people are supporting and sponsoring eSports events. It is going to evolve further with ever-increasing players and viewership. In time to come, it might even be on par or more popular than traditional sports,” he added.