Taking a Turn for the Better 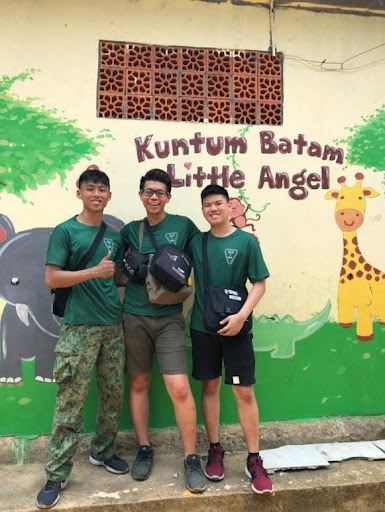 BEST BUDDIES: Yeow Loong (left) and friends who have been through thick and thin with him. (PHOTO BY: Ong Yeow Loong)

Ong Yeow Loong overcame the odds in his life and emerged stronger.

BEST BUDDIES: Yeow Loong (left) and friends who have been through thick and thin with him. (PHOTO BY: Ong Yeow Loong)

Ong Yeow Loong overcame the odds in his life and emerged stronger.

Life was uneventful for Ong Yeow Loong until he was 13, when his father walked out of the family.

His life was never the same again.

Yeow Loong recalled that he had to grow up faster than other and that included having to work part-time to make ends meet.

When Yeow Loong received his O-level results, he was devastated that he failed Math. Without a pass in and a less-than-stellar aggregate score, he could only get into or IT diploma courses, which he was not keen on. He then decided to work first and enlist in National Service, before making his next move.

While in NS, his and girlfriend encouraged him to retake his O-levels. Although he was keen, it was a letter from his mum that made the final push.

In her letter, his mother wrote – “Mother cannot write well”. That opening sentence woke him up. Yeow Loong said: “That simple sentence made me think about how my mother, with her limited capability, must have struggled to support us. I then realised that I have wasted the time when I had my chance at school and that must have disappointed her.”

The sky is the limit
Armed with a firm resolve and support from his loved ones, Yeow Loong retook his O-levels in 2015. He passed Math this time round and got a place in the Diploma in Human Resource Management with Psychology (DHRMP) in Republic Polytechnic (RP).

As a mature student, Yeow Loong was like an older brother to his schoolmates. “Some of my friends would look to me for help in academics and their personal life matters. I would usually try my best to help and advise them based on my experiences,” he added.

Yeow Loong, 24, excelled in his studies and is the proud recipient of several academic and non-academic achievements such as the Dr Tan Chin Tuan Foundation Scholarship. He was also an active executive committee member of the School of Management and Communication (SMC) Club. He also participated in numerous Service-Learning Projects, both locally and internationally. He also volunteered annually at St John’s Home for Elderly Persons.

“I managed to juggle my responsibilities because I knew my limits. I did not commit myself to too many things as I didn’t want to jeopardise my studies. What I found to be helpful in my learning process is to make notes after every lesson. This also helps me save time when studying for the exams,” said Yeow Loong.

He said that he would not be here today if not for the guidance of many good friends. His who helped him through the preparation for his exams, his childhood friends who took over the father figure in his life and who showed him how to be a good person, and his girlfriend for keeping him rooted to his goal to be a better man.

Above all, he said there are two persons who made the most impact his transformation. Firstly, his mother, who taught him to persevere despite the hardships they faced, and secondly, Kok Wee Casey, his RP junior who is also the SMC Club President. “Casey has shown me that despite our past, we are just as capable and we should not be ashamed,” Yeow Loong said.

Yeow Loong, who graduated with a GPA of 3.88, advises fellow schoolmates: “Never give up hope. It is not too late to start changing and making a difference for yourself. Do not be limited by or feel ashamed of your past mistakes, instead, embrace them as lessons learnt to build a brighter future and a stronger you.”