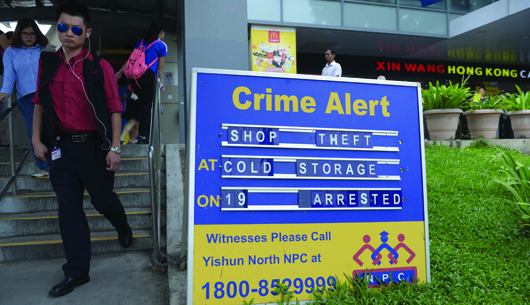 For the last 20 years, Yishun was a peaceful estate, minding its own heartland business – home to great parks, good schools, lots of new HDB flats and generally decent food. But somewhere from late 2015, strange things started happening and now everyone is calling it Singapore’s ghetto. #Yishunthuglife is an actual trending hashtag that pops up online every few months, usually when a cat is found murdered, or a man has been wandering about without clothes or when a mysterious sinkhole pops up in the road. There has been about 16 incidents in Yishun since December 2015 (see list of shame).

We ventured out into the deep recesses of Yishun to find if anything was amiss and if the residents were worried at all (we also wanted to catch something weird happening). After an exhaustive search, we found…nothing. Out of the ordinary that is. In fact, everyone The Republican Post spoke to only had nice things to say. Nice things.

Take 21-year-old NSF Ajay Raj Singh for instance. He moved from Hougang and says Yishun has been nothing but nice to him.  “I think it’s just unlucky and unfortunate that most of the unpleasant incident happened here. Yishun is a nice place and I don’t think we should label it as a danger zone. But instead, we can play our part as a resident to help keep a lookout for any suspicious activity,” Ajay added. He sounded sincere and helpful and not at all thuggish.

Madam Lam Yun Mei who has lived in Yishun Ring road for nine years couldn’t disagree more. The 50-year-old full time homemaker said she has wonderful neighbours who take care of her.

“It’s the opposite (of a bad town) I feel, we always update and look out for each other’s safety and alert one another if something strange or unwanted is going on. Recently, unpleasant incidents happened and all the more we should be more alert and help each other out,’’ said Madam Lam.

Sharing the same sentiment, 54-year-old engineer Mr David Leong Mun Seng, a pioneer resident of Yishun said he goes about his business like he has for years. “None of the neighbours or friends living in Yishun area that I know of was avoiding interaction of any sort. We still have our kopi sessions religiously every Saturday and Sunday mornings,’’ added the affable man.

Okay, maybe that’s the older folk. We decided to ask the younger Yishunites for their views. Again. We were inundated with nice.

Aslam Irsyad Amhar, 17, a Year 1 biomedical student in Nanyang Polytechnic and a resident since he was a baby, said he loves how connected Yishun is. “It’s very connected, though, because there’s like a new futsal court there, there’s a basketball court, there’s SAFRA Yishun, and there’s the hospital here with a really nice pond and a jogging track. It’s a great place for families!’’

Okay, surely there must be something that is spooky?

““A man found drenched in blood at North Point was pretty shocking I guess. Though there hasn’t been a solid reason on why he found on the floor, many claimed that he was trying to commit suicide, so that’s a bit scary,’’ said Subramnaniam S/O Selvanaiyagam, 19, a second-year, Diploma in Design for User Experience student.

Most others said they were spooked out by the number of cats that were killed. But even then, that didn’t stop them from singing praises: “I’m an animal lover and also a cat lover, and I don’t think killing cats is nice. I would not like those kinds of things to affect and ruin the reputation of my neighbourhood,’’ said Aslam defensively.

Okay, we give up. No one in Yishun actually lives in fear and everyone seems like they genuinely like this place. We didn’t find a single dead cat or a weird half naked person. Perhaps Muhammad Syarifuddin, 20, a Year 3, Diploma in Media Production and Design student, sums up it up for everyone: “Look, I think it’s a bit crazy because all of a sudden such things happened. Since secondary school, it used to be a peaceful, calm kind of place. Maybe the police can do more patrols to ensure no more killings take place.”

Yup, no more killings. Because that is just not nice. Especially not in Yishun.