Republic Polytechnic’s Diploma in Mass Communication (DMC) launched its first project showcase on April 13, 2018 with the aim of providing a deeper understanding of what the diploma and its students have to offer.

Held at the open area between RP blocks E3 and E2, the project showcase exhibited the different elements of mass communication, such as broadcast journalism, photojournalism and public relations campaigns.

Those behind the showcase worked on the “Time Capsule” theme and set up three dome-like structures where visitors could enter to look at photographs, posters and videos. 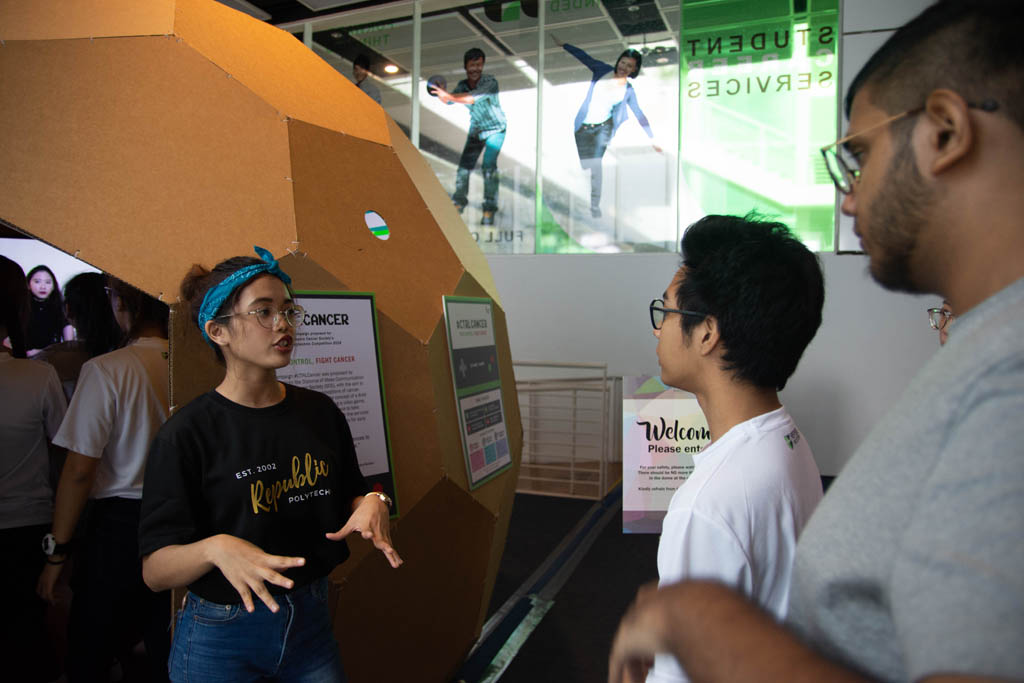 SHOW AND TELL: Student Leader Amelia Nor, 17, speaking to freshmen about CTRL Cancer, a cancer awareness project that was done by her team. (Photo: Darius Boey)

Lecturer Koh Yann Ling said the purpose of this showcase was not only to show freshmen different aspects of DMC, but also to inspire them to meet standards of the projects presented.

She said: “We conceptualised this exhibition to make it unique, and to not follow the usual board and panel idea. We wanted something that’s interactive, and we wanted our visitors to be a part of the exhibition rather than to make them look at the exhibition from afar and not interact with it.”

The structure of each dome was formed by hexagonal-shaped cupboard. Each dome exhibited a different industry project: A series of multimedia photo essays themed “Celebrating Life in the Heartlands” for Housing Development Board, broadcast videos about hawkers and hawker centres for the National Environment Agency, and works from the Singapore Cancer Society Inter-Polytechnic Competition.

For the Singapore Cancer Society project, posters featuring morbid words such as “death” and “suffer” were juxtaposed against positive words such as “life” and “support” and placed on the outside of the domes.

“It’s a very immersive experience because you have to enter the dome to see the exhibits,” said Lisa Ng, a final-year student who helped to set up the showcase. “When you enter the dome, it’s as if you’re alone in darkness. It’s just you, the projects, and nothing else. You would be completely mesmerised by the works and you wouldn’t be distracted by anything.”

The showcase was officially opened via a livestream on the Diploma’s Facebook page and freshmen were given a chance to speak to seniors about the projects on displayed.

Muhammad Yazid, a freshman who is interested in video editing, said: “Getting to know all this information tells me what I can expect when I go to class and like what kind of work I’ll be doing in the future.”

Edlyn Chew, another freshman, added: “When I look at the showcase, I feel very inspired and motivated. I believe that if my seniors can do all of these detailed works through the modules they took in their curriculum, then I can do them too.”

The exhibition ended on April 23.