Setbacks were springboards to success for this gold medallist 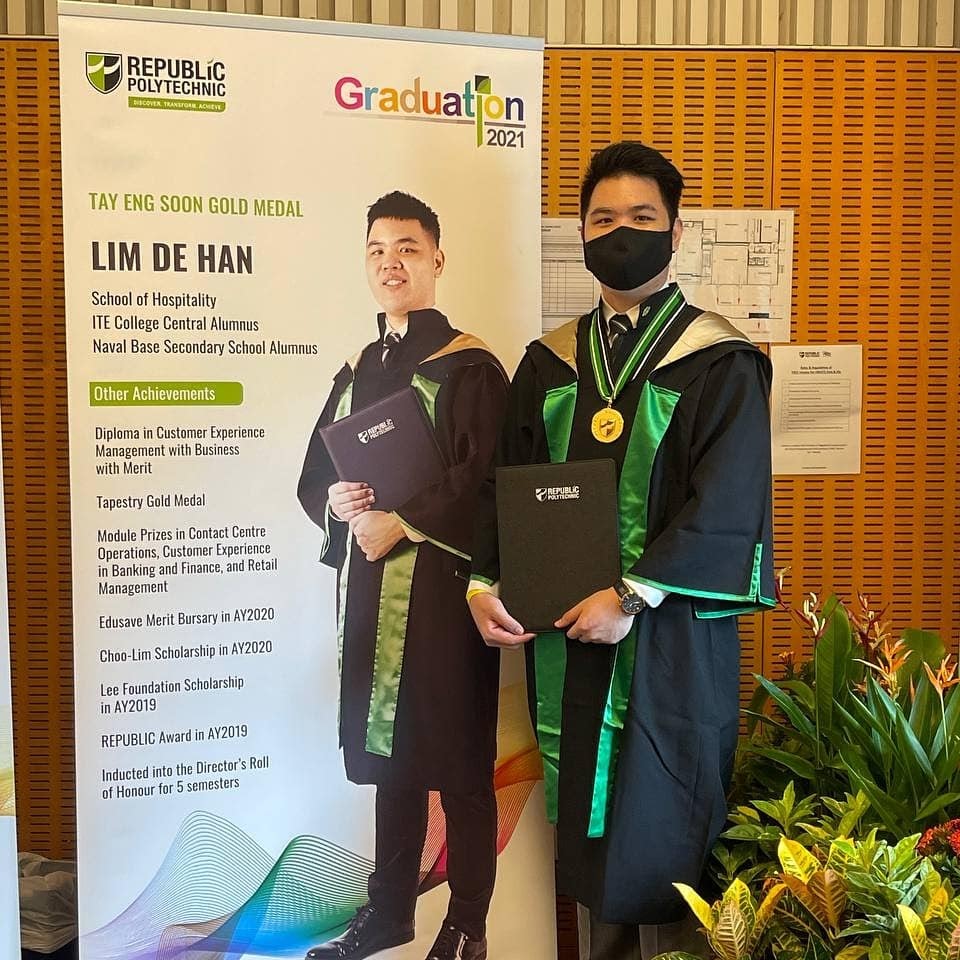 It was not long ago that Lim De Han’s application for the Diploma in Restaurant and Culinary Operations in the School of Hospitality (SOH) was rejected. It was due to his colour deficiency condition. But that setback did not stop him from achieving academic success.

During Graduation 2021, De Han was awarded with the Tay Eng Soon Gold Medal. The award is given to outstanding graduates who have graduated from ITE prior to their studies in polytechnic. De Han received an email regarding his achievement and “was not expecting this award at all”.

The 24-year-old Consumer Experience Management with Business (DCXB) student had various opportunities to explore and learn new things. These included joining the Business Case Competition 2019, the Academic Peer Programme (APP) and leading the DCXB Touch of Joy, a service-learning programme that organises sports, nature, and art activities to enhance the functional skills of youths with autism.

De Han found out more about DCXB Touch of Joy when Miss Mandy Low, the lecturer-in-charge introduced the programme to the students from the diploma. He was eventually chosen to lead a core committee of 13 members and recruited 56 peers from his cohort. De Han felt that one of the most rewarding parts of leading the event was finding like-minded individuals who had the same passion to give back to the community.

Although De Han described his experience to be extremely rewarding, he admitted that the process had bumps along the way. There were instances where he had to handle major problems like sponsor withdrawals that had the potential to destabilise the entire project.

Despite the dark clouds that would gather at times, De Han’s leadership capabilities shone through. He often demonstrated resourcefulness and emotional stability under immense pressure. De Han recalled: “As the overall-in-charge, I had to make the call on what is possible and what is not to ensure that the limited resources we have are allocated adequately.”

He felt that his experience in Touch of Joy “was an unforgettable and indescribable feeling of achievement”.

A lesson that he attained from his involvement in community work, school programmes and internship was that “mindset was very important in life”.

“When faced with a challenge, rather than asking for help and seeking an easy way out, I would think of it as an opportunity to improve and face it head-on,” he said.

Reflecting on more than two decades of his life, De Han said his younger self would be very proud of him, seeing his achievements.