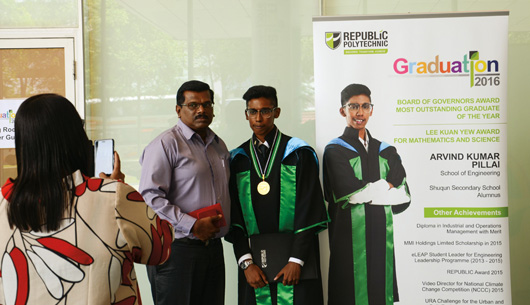 In today’s competitive education system, there’s a good chance that when a child fails math at primary school he is the most unlikely candidate to top his cohort in a tertiary institution. But Arvind Kumar Pillai is not just any student. He is RP’s Most Outstanding Graduate of the Year and winner of the Lee Kuan Yew Award for Mathematics and Science, graduating with a GPA of 3.90.

How did this student go from constantly failing exams to topping an entire cohort?

“I’m honestly not sure, this transition didn’t happen instantly or in a day, it started with a simple thought that I could be better, and eventually that thought became a way of life,”said Arvind.

Throughout his time in school, Arvind was always told that he was not academically inclined – a label even he believed in.

“I was pretty much failing everything since primary school. I even failed my prelims in Primary Six,” said the 21-year-old.

The Industrial and Operations Management graduate from the School of Engineering (SEG) was never a studious child. He often spent his time playing floorball and hanging out with friends. School books were left untouched and homework unattended. He considers it a miracle that he made it to the Express stream in Shuqun Secondary School.

His biggest setback came when he was 15, when he failed and had to repeat Secondary Three. He struggled to cope with the curriculum and was simply disinterested to study. So what pushed him then? Good old parental intervention.

“Teachers told him that he had to step up. We put him in tuition, we pushed him and we put a reward for him so he could be more motivated,”said Mr Elanko Pillai, Arvind’s father, a 50-year-old project manager at Haneda Construction and Machinery.

Eventually, Arvind would go on to achieve a L1R4 of 17 points in his GCE O-Level examinations and he could qualify for a course in SEG. He confesses that he did not change much when he first entered and that it was RP that really made the difference.

“Honestly I didn’t have to do anything myself; RP is the one that gave me all these opportunities. A lot of facilitators sent me for competitions, even if I did not want to, they will just drag me into it,” said Arvind. Initially reluctant, he soon started to accept the chances given to him in hopes that he would learn along the way.

His enthusiasm to learn new things and embrace new challenges soon became part of his journey in RP and one that opened his eyes and many doors.

“I realised that stepping out surely meant chances of failure was imminent but avoiding it would mean avoiding chances of success too, so I started saying yes to every opportunity,” said Arvind. As a result, Arvind achieved many awards such as the Republican Award for academic year 2014 and the MMI Holdings Limited Scholarship 2015.

Now that he has tasted both success and failure, Arvind feels he is ready for what is in store. He hopes to enter the Singapore Management University or the National University of Singapore after his stint in National Service – a reality that was only a pipe dream for a boy primary school.