Going beyond his disability to help others 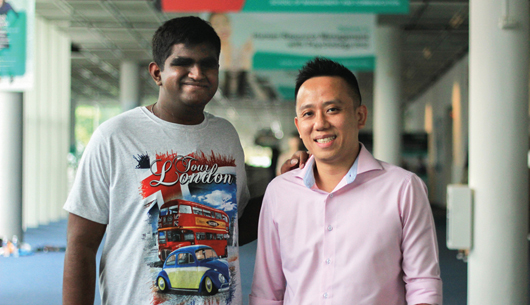 When it comes to helping others, Republic Polytechnic (RP) student John Danesh Krishnan believes there is only one obstacle in the way – a person’s mindset.

“It does not matter if you are physically disabled,” said the 17-year-old who is visually impaired. “If you have the drive to help others and make lives better for them, then the disability you have would just be an irritating insect – one which you can flick off and go on your way.”

In April, John embarked on a new journey when he entered RP’s Diploma in Social Enterprise and Management (DSEM) course. He became the diploma’s first special needs student. “The business-with-a-heart concept appealed to me,” said John, who suffers from 100 per cent visual impairment.

When he was two, John was diagnosed with stage four eye cancer and doctors gave him a five per cent chance of survival. John survived the cancer bout but lost his sight.

Despite this, John is no different from his peers. He wants to forge close relationships with those around him, enter a university of his choice and dreams of being a lawyer in the future to help others.

“A helping hand always goes a long way. The help which you provided might be very small to you but it might mean the world to the person you have helped,” said John, who is an only child. “Helping others make me happy because well, you only get one life to live. Why not spend it by doing good for others?”

To ensure a smooth and fruitful journey at RP, iC2 Prephouse, a charity that supports the cause of the young visually-impaired who are still in or are entering the mainstream education system in Singapore, was engaged to help John settle in to student life at RP. The charity also provided workshops for DSEM students and lecturers so that they could help John in his learning.

Lecturers also had to review John’s course modules to sift out those which are not suitable. For example, John is exempted from modules such as Effective Communication and New Media Communications because most of the content in these modules involved visuals. Alternative elective modules are then offered to replace these modules.

Lesson materials, such as worksheets and lecturers’ presentations, have also been customised. This allows the software in John’s laptop to decipher the documents according to his learning needs.

Despite these special provisions, John behaves like any other student. He contributes to team and class discussions, and presents during the third learning phase.

Mr Peter Lee, a lecturer from DSEM and John’s mentor, said: “He presents well and when we ask questions in class, he would volunteer to answer them.”

John’s classmate, Nur Syirin Nabilah Yunos, 17, feels the same way about John as well. She said: “He can elaborate on concepts very well and his presentations are great.”

John says he never lets his disability become a hindrance to what he wants to accomplish.

He said: “You would always want to give up if you think that your problems or disabilities are too much to bear. However, if you go beyond your disabilities and managed to accomplish your goals, isn’t the victory that much sweeter?”

“When it comes to helping others, there’s only one disability. It’s not being blind, deaf or wheel-chair bound. It is your own mind-set.” John Danesh Krishnan