‘I hold her hand every day and hope she will wake’ 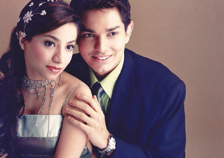 For some, marriage vows may seem a formality. Mr Chandru Vishindas, however, has embodied the vows he made after his wife, Madam Pooja Baharani, fell into a coma more than four years ago. He speaks to The Republican Post’s Sharon Elango about the couple’s love story.

It was love at first sight for this couple when they met at the age of 15. A year later, Mr Chandru Vishindas proposed to Madam Pooja Baharani and they married when they were 25. Three years later, the couple had their first child.

Their love story took a twist on June 20, 2012 after Madam Pooja fell into a coma when she was giving birth to the couple’s second child, Ryan. Madam Pooja encountered severe foetal distress during the delivery and the baby had to be delivered with the aid of instruments.

Ryan suffered brain injuries during the delivery which left him with mixed spastic and dystonic quadriplegic cerebral palsy. According to Mr Vishindas, Madam Pooja lost 16 pints of blood. Due to the lack of oxygen, she suffered a cardiac arrest and a severe brain injury.

“I was devastated,” said Mr Vishindas, 37. “My son who was supposed to be healthy is handicapped and my wife whom I love so dearly is in a vegetation state. It felt like a nightmare but in reality, it was happening.”

Mr Vishindas added: “I tried to pull up myself up. To date it has been four and a half years and I believe with God’s strength and the support of my family and friends, I am more positive now.”

Ryan, who is now four, is being cared for by a nanny. Madam Pooja, who was warded for five months after the delivery, has been looked after by two nurses and her mother at the family’s Bedok flat.

“I trust Chandru and I know he always does his best, not only for my daughter but for all of us,” said Madam Rani Baharani Gansham, Madam Pooja’s mother.

According to an article in The Straits Times in 2015, Mr Vishindas has spent more than $800,000 in providing for his wife and son. He has also created a website “prayforpinky” dedicated to Madam Pooja.

“If you think I am a good spouse, I can confidently say that my wife is a million times better,” said Mr Vishindas. “What I am doing for her cannot be compared to the love she has showered upon me and my family.”

Mr Vishindas still clings on to the hope that Madam Pooja will wake from the coma and they will be able to hold hands, laugh and joke just like they used to do.

“She held my hand and asked me if everything was going to be alright but now I am holding her hand every day longing for her to be alright,” said Mr Vishindas.