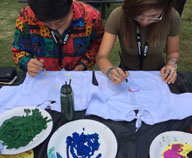 In recent years, IGNITE! has also been a platform for various worthy causes to raise awareness. Some of the causes featured at this year’s IGNITE! included Operation Smile, Project Carnation and Music for a Cause!

Smile IG, which is affiliated to non-profit organisation Smile Asia, has been a feature at IGNITE! for the past five years. Last year, they raised $300 which was used to send a child in Cambodia for a surgery. Smile Asia helps children with facial deformities such as cleft lips.

This year, Smile IG decided to get festival goers paint drawings or write short notes of encouragement on operation gowns. The operation gowns will then be given to the children who will be going for an operation.

President of Smile IG Sandra Sunarti Sulaiman said IGNITE! has helped Smile Asia gained “a lot of recognition”. “We managed to reach out to 300 to 500 people in two nights and it was good enough for us as we cherish every single opportunity that we can get,” she said.

Project Carnation is another social cause supported by IGNITE! Project Carnation was started to raise awareness for people with physical disabilities. With a motto of “Disability is NOT an inability”, they sold items such as cookies and biscuits while raising awareness about their cause to the festival goers.

Music for a Cause made its debut at IGNITE! this year. Music for a Cause is Singapore’s First Social Cause Music Festival and it supports local bands, local entrepreneurship as well as local social causes. The music festival is running its third series in January 2018 at Singapore Management University’s campus green.

Mr Ganesh Kalyanam, Festival Director of IGNITE! Music Festival, said the causes were chosen based on student feedback and current service learning partners. “Both parties see great value in young people being involved in these causes where they have an opportunity to live the value of compassion, which is one of the values in our Republic Code of Honour,” he said.

RP students who attended IGNITE! gave their thumbs up to the social causes which were featured at the annual music festival.

Aisha Seniya, a first-year Pharmaceutical Sciences student, said: “It is heart-warming to see IGNITE!, a student-run event, fostering and promoting a culture of philanthropy. It just goes to show how music is a powerful tool that can join the likes of charities and communities for the sole cause of merry making.”

Mira Purnamasari, a second-year Mass Communication student, added: “What we think may be just a few dollars for cookies, actually means a lot to the kids who receive this money as every dollar helps them and it’s great to know that our money goes to those in need.”