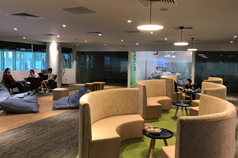 The new Student Hub at W1, a shared space created to encourage Interest Groups (IG) to share the facilities, has drawn mixed reviews after it was opened in January, this year.

Darren Leong Yew Mun, 19, training department head for Photo IG said: “I think the appearance does look good because it looks more modern but I would still prefer the old IG room because it’s more personal to us. It was our room and not a shared room where you have to book and go through approvals.”

The second-year Media Production and Design student also added that there are disadvantages to the new facility compared to the previous IG rooms.

“There’s really not much facilities because it’s mainly just meeting rooms and a centre lounge, so it’s not very useful,” said Darren. “There is also little to no privacy because the partitions are made of glass, so people can see what we are doing inside.”

Darren is not alone on this issue. Second-year Biomedical Sciences student Pavithra P R Muniandi, 19, also agreed to the lack of privacy at the new Student Hub. The events department head for Photo IG said: “Everyone can see what we are discussing about or what we are doing.”

Muhd Haady Raihan, second-year Design for User Experience student and School of Technology for the Arts representative for the Student Council, echoed similar sentiments. “I feel that having the old IG room is much more conducive due to the space and it also feels more like home,” said the 19-year-old.

Despite these concerns on the new shared facility, Dicky Zulkarnain Asrin, vice president of the Student Council, said the new Student Hub encourages IGs to share the facilities. The 24-year-old said: “Although the IG rooms gave a sense of belonging and privacy to IGs, it was unfair for certain IGs as they did not have their own rooms. The Student Hub treats everyone equally in the sense that any IG can use it.”

Dicky felt that the Student Hub also allows IGs to hold fruitful discussions. “The place is very conducive for meetings to be held since it is enclosed and resources, such as whiteboard and markers, are provided in the meeting rooms. The overall student hub gives off a laid back atmosphere too,” he said.

Second-year Sports and Exercise Sciences student Nursya Zainudin, 21, felt the new Student Hub allows students from different IGs to come together. The School of Sports, Health and Leisure representative for the Student Council said: “It gives more space for students to come together and enjoy.”