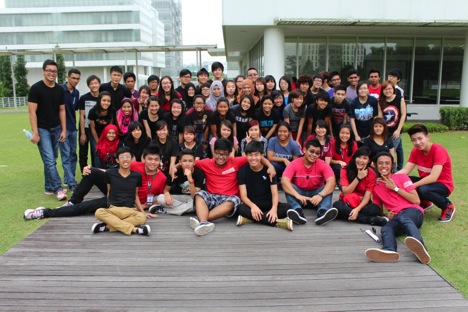 As we bid farewell to graduating students, we welcome a new batch to fill our ever-growing family. They face an exciting year ahead and what better way to start than with the Freshmen Orientation Camp.

Republic Polytechnic (RP) officially opened its doors in 2002, and back then it was a small institution with a big dream. 10 years on, RP has shown that a brave new learning system and a can-do spirit is all it takes to realise those big dreams.

With 38 courses offered, RP is slowly growing in strength. “With the increasing number of students, we have a bigger talent pool than before. There is certainly more energy now within the ranks – not only the freshmen but also the student leaders, the staff and everyone involved,” explained Mr Joshua Yeo, Academic Staff of Centre for Enterprise and Communication (CEC) and Lead Facilitator for CEC Orientation Camp.

Freshmen had a blast at the Jam and Hop, the highlight of the Freshmen Orientation Camp.

From early April, the different schools in RP conducted their individual camps before the official poly-wide Orientation Programme which were held from April 12th to 16th.The Republican Post caught up with two schools who worked hard to welcome their new intake in the family – the School of Applied Science (SAS) and the Centre for Enterprise and Communication (CEC).

As wide-eyed freshmen inched their way from the long corridor of the One Stop Centre (OSC) into the Agora Halls, little did they know they were not the only ones making a brand new start.

For some student leaders like Rachel Chua, a second year student of Diploma in Mass Communications, being involved as a leader was a brand new experience too.

“I am generally a shy and quiet person. Assuming the leadership role meant that I had to step out of my comfort zone and take the initiative – leading the freshmen as well as make sure they were having a fun time,” said the petite 18-year-old.
But student leaders are essential in making sure the freshman get their questions answered. Nguyen Quang Matthew a Diploma in Biotechnology student explained how preparations started as early as December.

“The committee has been preparing for the camp since December. Facilitators would estimate the quantity of food and drinks needed for the entire SAS camp. Medics certified with a standard first aid course certificate were also present to ensure the safety and care of the freshmen who are under our responsibility during the period of these two days,” said the 20-year-old.

CEC’s version of the popular Korean game show “Running Man” was the first of the line up of wonderful yet carefully crafted series of games, designed not only bond the freshmen but also evoking communication between the still-awkward freshmen. As the freshmen raced around the campus finding clues and executing hilarious challenges, one could see the ice slowly melting away and the freshmen began to open up to each other.

Next up was the individual diploma time. Six hours set aside for the freshmen to find out about their diplomas and what was expected of them. To end the programme, the students performed in “Five Minutes of Fame’’.We unearthed a beat boxer, good dancers, singers and an accomplished musician – CEC had quite a few talented individuals!

Rosanna Kuek a freshman enrolled in the Diploma in Social Enterprise Management said: “The camp was BETTER than expected! Initially I didn’t want to come, especially since it is an overnight camp. But now, I look forward to sleep overs with my new friends and get to know each other even better.”