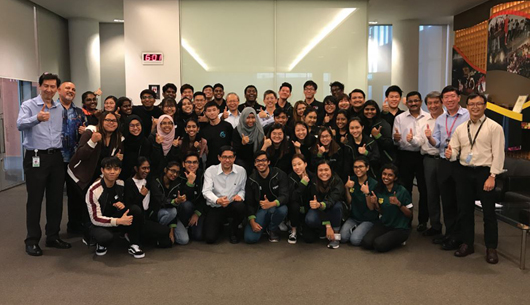 About 40 office holders from the Academic Clubs and clubs such as Sports Club, Adventure Learning Club and Student Council attended a closed-door dialogue with RP’s senior management on September 14, 2017.

The student leaders were given an opportunity to raise any RP-related questions to the management. The mood before the dialogue began was tense as it was the first time for most student leaders to speak directly to RP’s management. But the mood lightened as the panel representing RP’s Senior Management, which included Principal and CEO Yeo Li Pheow, stressed that they took the student leaders’ concerns seriously and the questions raised would help the RP student population when it comes to policy formulation.

Mr Yeo was also asked about his vision for RP in five years and what would make RP successful down the road. He shared his concern about the constantly changing world and how RP needs to keep pace by constantly updating its curriculum and engaging industry so as to stay relevant. Mr Yeo, however, stressed that RP’s basic principles of education will not change and students would need to continue to upgrade so as to stay relevant and embrace lifelong learning and be in demand.

The dialogue has become an important feedback channel for the student population. One of the key recommendations made at the dialogue involved the staggered starting time for classes at RP so as to allow students to arrive on time. Previously, all classes started at 9 a.m.

“The beauty of it is that it that we’ve actually seen that the some of the concerns addressed and some of the recommendations or suggestions made by the students have actually become reality,” said Office of the Student and Graduate Affairs director Ganesh Kalyanam.