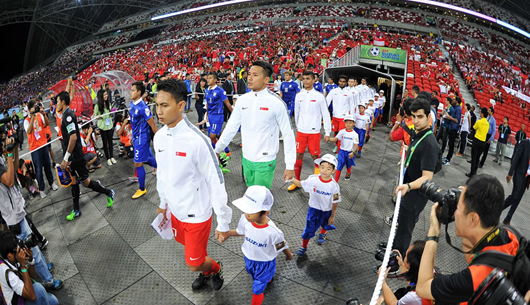 The 10th edition of the AFF Suzuki has kicked off this week. Here is what to expect as eight teams vie to win the biggest football prize in Southeast Asia.

The 2008 champions had a tournament to forget in the last edition of the tournament, crashing out at the group stages with only one point to their name. But with star striker Le Cong-Vinh and new Japanese coach Toshiya Miura at the helm, expectations are high, with the added bonus of playing the final at home sure to be a motivating factor in their quest for the trophy.

Player to look out for: Mac Hong Quan

The 22-year-old attacking midfielder started out his career in Czech Republic with the B team of Sparta Prague and judging by his performances in the recent Asian Games, Hong Quan could be Vietnam’s golden boy at the Suzuki Cup.

Semi-finalists in 2012, the Azkals will be looking to go one step further and reach the final. With brothers James and Phil Younghusband leading the line, they will provide a genuine challenge for Vietnam to win the group. Expect the Filipinos to be right in the mix for the title.

Player to look out for : Phil Younghusband

The 27-year-old is blessed with an aerial presence and a knack for scoring goals. Having been through the Chelsea acadamy, he has proved to be an influential member for the Azkals. Bank on him to score the crucial goals to help his country.

Commonly written off as underdogs with little chance of making it out of their group, Laos will have a point to prove this time round. Having given Singapore a scare in the last tournament, where they lost only by 4 goals to 3, the young side will prove to be no pushovers.

The 22-year-old was the only name on the lips of coaches after Laos defeated Brunei in the qualifying rounds. His hat-trick was certainly the reason for that and he will be one of the key men for the Laotian side if they are to make it out of their group.

Despite being in four previous Cup finals, the Indonesians only have runners-up medals to show for. Despite their setbacks, the Indonesian team have many positives, including the debut of talented midfielder Evan Dimas.

Player to look out for : Evan Dimas.

Not many players can say they have represented their country at the highest level of football at 19. Even fewer can say they scored on their debut. For Evan, he has done both and will be looking to build on his good international form as the Merah Putih seek to advance in the competition.

Four-time champions, co-host for the tournament, brand new Sports Hub as the venue for all group games. Sounds like a recipe for success for the Lions. But with a new team filled with only homegrown talent and a group which consists of ASEAN heavy weights Thailand and Malaysia, this will not be a walk in the park for them.

Player to look out for: Faris Ramli

The 22-year-old was one of the bright spots in what was a disappointing campaign for the LionsXII side. Expect him to deliver quality crosses and run down the flanks tirelessly during the tournament.

The Tigers seem almost a different team from that of which lifted the 2010 edition of the competition. Crashing out early in the last tournament, they will hope to improve their form this time round.  With star midfielder Safiq Rahim still likely to miss out, they will surely have to work to qualify from the group featuring two of ASEAN’S football powerhouses.

Player to look out for: Zubir Azmi.

The 23-year-old barely made the age limit as his birthday was before the selection date, but with him in the squad, the Tigers can expect pace down the flanks. His tenacity and industrious movement will allow the Malaysians to exploit opposition defences.

At only 21, the attacking midfielder has already been linked with Bundesliga and J-League teams. Calm and collected in front of goal, this wonder kid, who was recently voted Thai Premier League Player of the Year, is destined to shine at this year’s tournament.

A dominant force in the 1960s and 70s, the Myanmar of now pale in comparison to the team that tore up the pitches back then. A disappointing 2012 campaign was capped with the loss of their seeding for the tournament.  On a brighter note, they have former Singapore coach Radojko Abramovic, who knows a thing or two about winning, at the helm.

Player to look out for: Kyaw Ko Ko.

The 21-year-old was mainly responsible for helping Myanmar qualify for the tournament and has a knack for scoring. With a bright future ahead of him, expect him to seize the opportunity during this tournament.