‘The Biggest Challenge is Being Funny on Stage All the Time’ 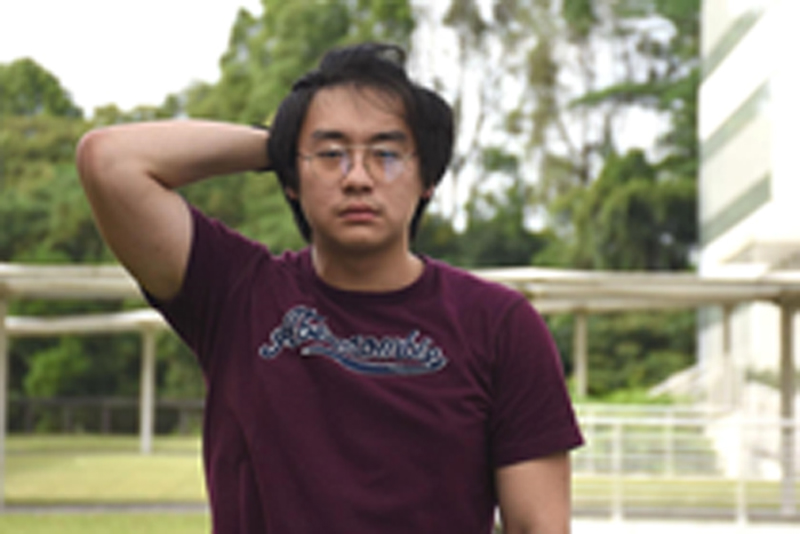 Comedians are like piñatas – they’re usually perceived as bright and colourful. But Mass Communication student Leon Chin is cool and reserved, practically the antithesis of your average comedian.

The 20-year-old has been dabbling in stand-up comedy for nearly a year. His shows last from five to eight minutes and follow a dark and explicit brand of humour, suited for a more mature audience.

Some of his favourite comedians include Americans George Carlin and Bill Hicks, who are known for their acerbic black comedy routines.

Their wisdom in the trade has rubbed off on Leon, who drew influence from them during the search for his own identity as a comedian. He sits down with Marcus Leong to talk comedy. 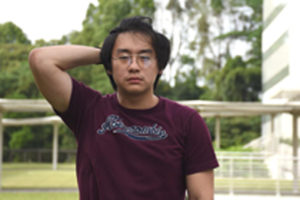 A self-deprecatory soul: Leon Chin, 20, says he has no favourites when it comes to his own jokes. In fact, he adds that contrary to what many think, most comedians do not like their own jokes. (PHOTO: Salwa Nadhirah Bte Suandi)

How did you dive into stand-up comedy?

I’ve always wanted to do stand-up since I first saw it on YouTube when I was 13.

I had my first gig about a year ago. My friends and I went to watch a local comedy show, and I asked one of the hosts if there was an open mic gig – he said ‘yes’.

So I signed up and performed. From then on it was just performance after performance. My first show was at Molly Malone’s Irish Pub, but I have since moved to The Merry Lion Comedy Club.

What are some of your biggest challenges so far?

The biggest challenge is being funny on stage all the time.

I remembered one of my shows when I was first starting out – there were these two ladies in the audience. Halfway into my set, they just got up and left. I was quite shocked but the show had to go on.

You have to accept that failure is inevitable. Not just in comedy, but in a lot of the things we want to do. Bad experiences are the ones you learn from the most but they do not feel good.

What is your best memory of being a comedian to date?

It would have to be my first paid show for a party at some wealthy lady’s house. She hired my friends and I, and we performed for five to 10 minutes.

While I was originally supposed to talk for five minutes, I went on for eight because I was having so much fun. We were paid $50 and we got to party for the rest of the night.

What does your family think of your job?

My mom supports me fully, while my dad doesn’t know that I plan on doing this full time. He’s a very traditional man, so telling him that I want to do this is hard. My mom is more open-minded and she’s very cool, she actually came down to watch me a couple of times.

How do you balance work and school at the same time?

School usually happens in the day and work happens at night. So I finish up all my work in school then head over to the show to do my set. The next day, the cycle repeats itself. I get shows about two to five times a week.

How do you go about preparing for a show?

I go over my notes and rehearse them in my head. Once I get home, I also look in the mirror and rehearse the lines to myself. For a scheduled show, I usually write all my material beforehand, so it’s just a matter of organising it.

What keeps you going when you experience challenges?

The fact that I enjoy doing this more than any other ‘job’. Enjoying something I do, even if I fail, is really all I care about. The passion I have for comedy helps fuel me for the long run.