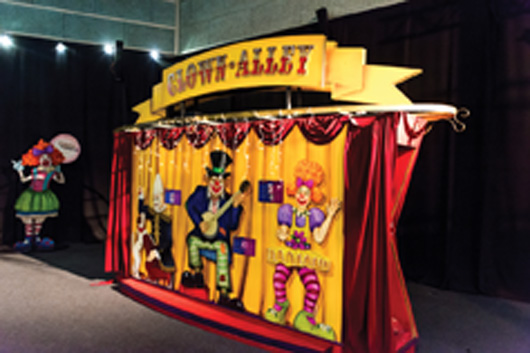 Circuses may seem like the stuff of storybooks, but you’ll be surprised to know that they’ve been thriving in the entertainment sector in places such as the UK and USA since the late 1700s. Historically, they’re known for acts that seem to defy all known laws of science – such as tightrope-walking, trapeze artists and alarmingly flexible contortionists.

If you’ve ever wondered just how these acts are performed, the Singapore Science Centre’s latest exhibition is the thing for you. Dubbed ‘Circus! Science under the Big Top!’, the exhibition unveils key secrets behind circus acts with an array of interactive exhibits. The Republican Post’s Varnapriya Prakash explores six of the most intriguing exhibits to untangle clever circus artistry.

You don’t have to be a star gymnast to somersault in mid-air – the Elastic Acrobatics exhibit will bring out the acrobat in you.

This exhibit was stunning. As acrobats flipped and tumbled through the air above our heads, I was captivated by their seemingly weightless bodies and effortless grace.

I observed quite a few children trying out the exhibit and they did very well. I was amazed at how flexible they were and of course, their courage to try it out.

Picture yourself three metres off the ground – that’s equivalent to the length of around one and a half king-sized beds. The thought may make those with a fear of heights feel queasy, but tightrope walkers can prance across a single cable with ease from that height.

I was very unsure of my decision, and was still not entirely convinced I would make it. After being strapped into a harness for safety, I was surprised to hear very simple advice from the staff, to “just move by placing one foot in front of the other”.

Unfortunately, no one said anything about wearing proper footwear for this exhibit. While I survived the exhibit, my sandals were not so lucky.

Though the bar looks similar to a lightweight bamboo pole, it is surprisingly heavy. It’s the perfect act for those who’d like to test their strength, or simply show off their brawn.

On a personal note, I did attempt to lift the bar, but unfortunately my puny muscles gave way and my toes very narrowly escaped being crushed by the bar.

Here’s a tongue twister for you – packanatomicalisation. It’s the art of fitting one’s body into very small spaces, which is exactly what contortionists do.

At this exhibit, I watched as some children gleefully managed to squeeze themselves inside it a 50cm-long cube.

Contrary to popular belief, contortionists are not ‘double jointed’ or have joints that stretch farther than normal. They simply have much more flexible joints and bones which are connected more loosely compared to the average person.

The reason for this is that contortionists have a lot more collagen in their tendons and ligaments, allowing them to painlessly twist themselves into pretzels or pack themselves into boxes.

Everybody loves a good chuckle; but exactly what tools of trade do these master comedians have hidden up their sleeves (or perhaps in their oversized shoes)? Come dressed in your best clown gear as you learn the secrets behind all that clowning around.

This exhibit contained tiny door panels I could open up and peer into to take a look at classic clown tools.

Let’s admit it – we all secretly love a bizarre, death-defying sword swallowing stunt, even though it’s difficult to stomach the thought of it. How exactly does the performer survive this dangerous and seemingly impossible feat?

How it works is that sword swallowers are able to swallow a sword by suppressing their gag reflex. They also learn to control the opening of certain muscles at the top of both the oesophagus and stomach.

The real secret is simply to practice relentlessly, and use clean, dull blades. Personally, I would not attempt it, simply because I don’t have the guts to do it (yes, pun intended).

Where: The Annexe, Science Centre Singapore

Admission: $18 for adults, $15 for children (aged 3 to 12), $52 for a family package (2 adults and 2 children). Singaporeans and PRs can enjoy free entry to the exhibit during off-peak weekdays.